Home / News / In Panama, Workers Blocked the Roads to Force Price Cuts — and It Worked 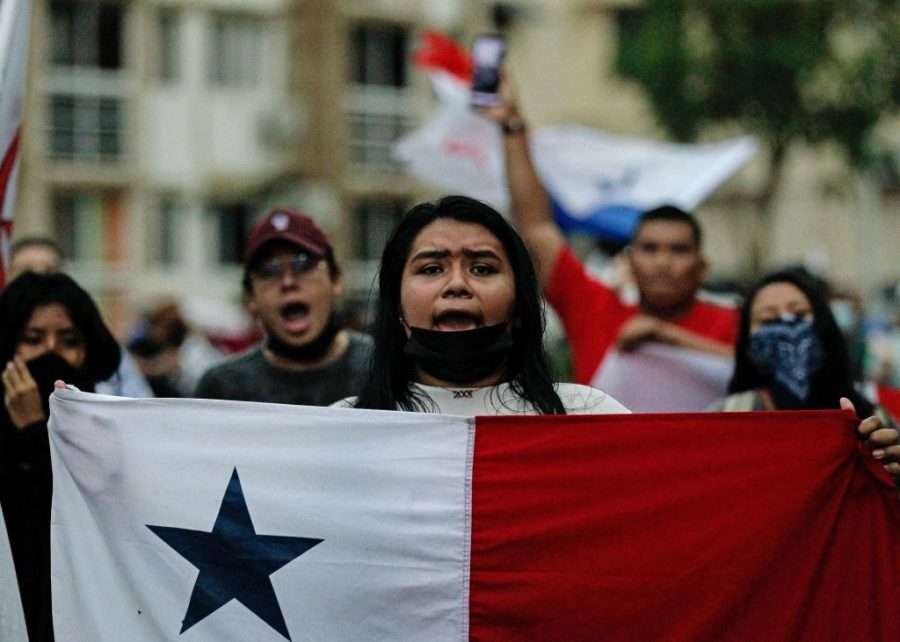 Panama is one of many countries where the cost of living is becoming untenable for workers. In recent weeks, trade unions have blocked major roads to demand the government impose price caps on food, gas, and medicine — and they’ve already won a 30 percent cut.

Demonstrators protest against the high cost of food and gasoline in Panama City, July 20, 2022. (ROGELIO FIGUEROA/AFP via Getty Images)

In early July, the People’s Alliance for Life, a coalition of Panamanian workers, students, and indigenous peoples, blocked the Pan-American Highway, the country’s main artery for personal and commercial transport. They demanded to negotiate with the government and find solutions to the high prices of gas, food, and medicine. Motor traffic was brought to a standstill.

Traffic jams are a regular grievance in Panama, a product of the deficient public-transport system, an overabundance of cars, and faulty infrastructure. Protests are usually framed by the media as yet another of these very Panamanian nuisances, and are quickly disbanded after government repression. But this time, drivers openly showed their support. People from the neighboring towns also joined in. In Panama City, the capital, people took to the streets and built barricades. Demonstrators danced, shared food in common kitchens, and some townspeople even slept at the barricades. For the first time since the 1989 US invasion that deposed dictator Manuel Noriega, everyday life in Panama had been brought to a halt.

The People’s Alliance for Life demanded one-on-one negotiations with the government, with workers united as one bargaining unit. Laurentino Cortizo’s government, under the nominally social democratic Partido Revolucionario Democrático (PRD), responded with strong repression, especially in the middle of the country in Veraguas province, where, on July 20, an eight-hour showdown ended with many wounded from beatings, pellet shots, and tear gas, among them pedestrians and even children. The police’s official tally speaks of twenty detainees and twelve wounded, though legal representatives from the teachers’ unions have registered twenty-two wounded by police forces. In the meantime, the government scrambled for a political response to quell popular ire: sham negotiations, freezing prices for a small amount of food products (though not enough for a healthy meal), and bribing attempts of Alliance movement leaders. After two weeks, Cortizo’s government agreed to televised negotiations.

As of the time of writing, it’s been just over two weeks since the beginning of negotiations. The blockades have been lifted and, on some of the nine points of discussion, consensus has been reached: a reduction of 30 percent to the basic food basket (from $289.92 to $207.92), with seventy-two additional caps to product prices; a reduction in gas price to $3.25 per gallon; and allotting 6 percent of the GDP for public education. Furthermore, the government has approved a temporary price reduction of 30 percent to 170 medicines. But the Alliance has denounced the government for not honoring these agreements and yielding instead to a corporate boycott. On Wednesday, workers took to the streets again in response to the continuous rise in the price of food in supermarkets.

The corporate elite, among them the powerful pharmaceutical and agricultural sectors, are working hard to blunder this process. Panama’s biggest corporate associations are making the rounds on the highly monopolized TV and print media. Their spokespeople threaten to ignore the negotiation’s agreements while warning about costs and demanding inclusion at the negotiating table. These claims go unchallenged by the media, which fails to point out the damning realities that point to their responsibility in the crisis. In 2019, for example, tax authorities reported an obscene 87.4 percent rate of tax evasion by companies.

Panama’s staggering inequality persists despite its unprecedented economic growth. While almost a quarter of the population lives with less than $400, 37.3 percent of the national income goes to the richest 10 percent. Yet the corporate media only pumps up the red scare with uninformed comparisons with Cuba and Venezuela, explaining away recent years’ civil unrest in Latin America as the ploys of the Left, and spreading conspiracy theories of foreign interventions being the protest’s driving force. All the while, the PRD government, which has been friendly with corporations since General Omar Torrijos’s day, has openly advocated for the inclusion of the business sector in the negotiations.

Also demanding a part in the negotiations are the so-called independents, who have quickly risen to fame due to their “anti-corruption” activism and connections with the media. They comprise numerous corporate-backed and US-friendly NGOs as well as congressmen. While petty corruption is an endemic problem in Panamanian politics, this establishment friendly activism leans heavily toward austerity and avoids any kind of criticism of real corruption: the one perpetrated by their backers.

Despite the agreements at the negotiation table, there have been many stalemates. There is still no solution for the question of high electricity prices or the impoverished social security system. The social movements in the Alliance denounce the government for refusing to set a cap to profits in the pharma industry. Furthermore, they claim a boycott by the government due to the constant cuts of the negotiating table’s live transmission, especially whenever facts damaging to the corporate class are said. But as certain as the backlash from capital is the resolve of the People’s Alliance for Life. It insists that the people will take back the streets as many times as they have to, for it is they who set the rules.