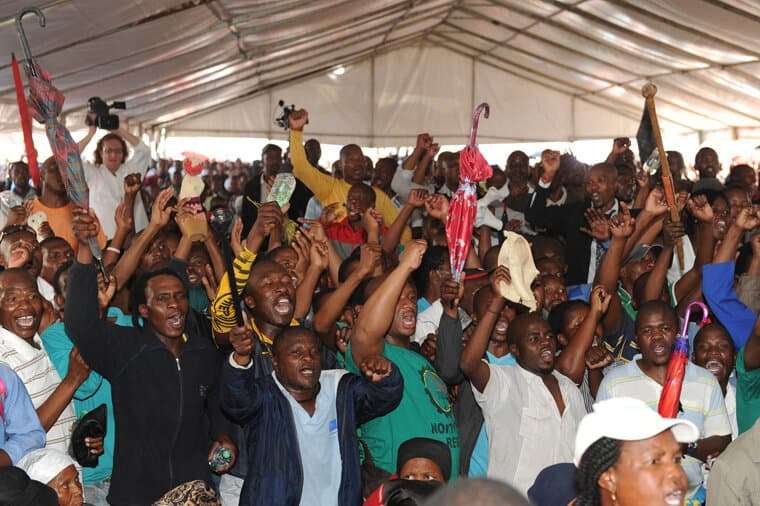 Memorial service for the Marikana strikers in August 2012

Ten years ago, police with automatic weapons gunned down 34 striking miners at Marikana, a platinum mining town in North West Province, South Africa. The shock and horror of what happened at the Lonmin company mine on 16 August 2012 echoed round the world.

As Socialist Worker wrote within hours of the killings, “This disgusting slaughter evoked memories of how the police acted during apartheid. All the hope at the end of that vile racist regime has come to this.” The killings were premeditated. As the strike—over pay, safety and basic rights— had grown stronger, Lonmin wrote to the minister of mines Susan Shabangu.

It demanded the state use “resources at its disposal to resolutely bring the situation under control. The police and the army presence needs to be planned.” Lonmin security had already attacked the strikers. Members of the NUM union, which felt its influence slipping away as it cooperated with mine bosses, were accused of shooting two miners in the back.

Because of its determination to buttress the ANC government, it had gone from a militant pro-worker union to a defender of the state and the corporations the state supported. And an unprovoked attack by police left three miners dead. But the workers did not back down.

In the immediate aftermath of a massacre resulting from toxic collusion between mining capital and the state, miners continued the strike. They stopped for a further month, inspiring wildcat strikes in other sectors across the country such as gold, transport and farms. Then 2014 witnessed the longest strike in South African mining history calling for a minimum wage of R12,500 (£700) a month.

This was the demand workers had died for on “the mountain”—the area near the Marikana mines. And they eventually won far more than bosses had expected to concede. Constructed People continue to occupy land and establish informal settlements, even naming them “Marikana”.

But the African National Congress (ANC) government has worked hard to cover-up the truth about the killings. Despite a commission of inquiry that sat for 300 days and cost £10 million, a decade has passed and no one has been held responsible. Racial capitalism upon which apartheid’s foundation was constructed did not end in 1994 when black people, voting for the first time, elected the ANC to government.

Millionaires like president Cyril Ramaphosa cashed in through the elite framework of Black Economic Empowerment. Black bodies continue to be exploited under the new set-up. Not only are townships such as Soweto, Alexandra, and Tembisa denied access to basic services, but like Marikana they are scapegoated when they rise up.

A day before the massacre Ramaphosa, a director of Lonmin, told a fellow boss that he had called on ministers to arrange “concomitant action” to deal with the situation. But the state charged 270 mineworkers for the murder of their slain colleagues under the “common purpose” apartheid-type law. The narrative is this was a tragedy where police, striking miners and government all played a part.

That lie hides the way the repressive apparatus was used ruthlessly by the state to defend the interests of capital. Sibanye Stillwater, the company that bought out Lonmin in 2019, claims to be a kinder alternative. A shrine outside Sibanye’s local offices is inscribed with words from the late Nelson Mandela. It says, “The time for healing the wounds has come. The moment to bridge the chasms that divide us has come. The time to build is upon us.”

The company’s “Marikana Renewal” process is supposedly geared towards building collaboration with the local community. Instead, the company has enforced stricter work hours, nearly impossible quotas for production and redundancies to remove those with a record of militancy. Remembering those who died at Marikana means struggle against the bosses, the state and the capitalist system that sentenced them to death for fighting back.

‘We remember the dead of Sharpeville in 1960. But I think Marikana was worse’

Solomon is a member of the Amcu union. He is one of the mineworkers who has launched a court bid to sue Sibanye-Stillwater and president Cyril Ramaphosa for R1 billion (£50 million) for their role in the violence

I was there when the police fired, I was there when my comrades died. I could easily have been in a coffin or disabled like many people. They did not just shoot people, some they followed and killed coldly. It wasn’t just 34 who died, it was the picture of a new South Africa that many of us had that died on that day.

Our strike in 2012 was very strong and very powerful. I knew from the beginning that Lonmin were devils and that they were making so much money from the suffering in the platinum mines. Those mines are splashed with our blood and the money is from our sweat.

After the massacre, some of our union office bearers went to other countries to see how miners were treated. In Australia they found rock‑drillers are paid as much in a day as we are paid in a month. They were white, we are black. In 2012 we stood up against Lonmin and also the NUM which was going along with the bosses.

How can a union be like that? How can it end up on the wrong side? I don’t know, but it happened, and even they were shooting and killing our striking comrades. We must never forget the dead of Marikana. We must never allow time to take away what happened.

It was our people doing the killing and they have never admitted it. We had truth and reconciliation after the end of apartheid. I want the truth about Marikana, that is why we are going to court. But I do not think there is going to be reconciliation. It was an honour that we fought in 2012 and afterwards. I hold to that. I regret what happened but not that we fought

‘This is a terrible place, but nothing is done’

Thumeka Magwangqana has been at the centre of women’s organisation in Marikana. She spoke of the bitter disappointment about the lack of transformation during the last decade

I was one of those leading the women at the time of the Marikana tragedy. We were not going to be forgotten or left out. We were all affected. Where I am standing now speaking to you is where the police stopped us on that day and said we could go no further. We heard the bullets, and then the ambulances.

The companies make false promises. The money they give is to the chiefs, who have nice houses, but help never come here to the mineworkers and community. We were waiting for a long time for a monument where people were killed, but that has not happened.

Our experience that day meant we formed a women’s organisation, and I was the chairperson. It is very difficult. After the Marikana massacre we thought there would be change, but there is no change. People sometimes go with nothing to eat.

Marikana massacre inquiry: The truth behind the cover-up
Read More

I know a woman who has no bed to lie on. She sleeps in a crate. This is a very terrible place. It’s dead and there are no jobs for many. People have no money. The water is polluted, if we try to grow food nothing comes from the soil healthily. People are still living in shacks.

Many times we have made complaints but nothing happens. We sing the same song every 16 August but there is no change. During Covid the contractor dismissed many people. Illegal There is no electricity except what we have rigged ourselves—“illegal connections”.

But it is dangerous. A child died because he leaned on one of the fences linked to these connections and was shocked. There is no water. We use pit toilets. The Sibanye company took over the mines in 2019. They are very cruel. Workers are even saying that Lonmin was better.

Most people who work in the mines do not come from the local area. They are from Eastern Cape, Lesotho, Mozambique, and many other places. The company seeks to divide people but the community has come together and said we must not be against each other.

The government is siding with Sibanye. And the ANC sides with the NUM which it is close to, and it does not represent us. We had a councillor from the Economic Freedom Fighters, but they did nothing different. So the ANC took the place again.

Failure to break from reformism wasted the momentum

The massacre led to an intense political debate on the left in South Africa. Leaders of South Africa’s biggest single trade union, the National Union of Metalworkers of South Africa (Numsa), said, “What happened in Marikana should be correctly understood, and must go down in our history as the first post-apartheid South African state massacre of the organised working class, in defence of the local and international mining bosses and their profits.

“The actions of the police confirm that we have not, post-1994, transformed the apartheid state and its violent machinery.” Numsa abandoned any perspective of reforming the ANC or the South African Communist Party and launched a move towards a new workers’ party.

But it dithered about doing it and missed the momentum after Marikana. Instead, the Economic Freedom Fighters of Julius Malema became the focus of much of the anger at the ANC. The EFF uses radical language. It talks of nationalisation and standing up for workers and the poor.

Yet it remains imprisoned by a focus on elections, councils and parliament. It does not focus on struggle from below. Numsa did eventually launch the Socialist Revolutionary Workers Party— an electoral project for the 2019 general election—but it hardly registered.

Challenged Numsa claims 340,000 members, but its party that also involved others achieved just 25,000 votes across the whole country. Numsa challenged the ANC links of the main trade union federation Cosatu. Eventually Numsa and others founded a new organisation in 2017—the South African Federation of Trade Unions (Saftu)—with 800,000 members.

But neither Numsa nor Saftu have prospered. Both are presently consumed by internal battles with legal moves to suspend or sack their leaders. Marikana should have seen a major split towards an anti-capitalist force. But that needed a total break from reformism and a concentration on workplace and township struggle. The failure to break from reformism has been disastrous.

Find out more about Marikana

Miners Shot Down is a brilliant film captures the events of the massacre and their impact. Buy the DVD for £18 or go to bit.ly/MarikanaFilm

The Spirit of Marikana: The Rise of Insurgent Trade Unionism in South Africa—by Luke Sinwell and Siphiwe Mbatha £9.99