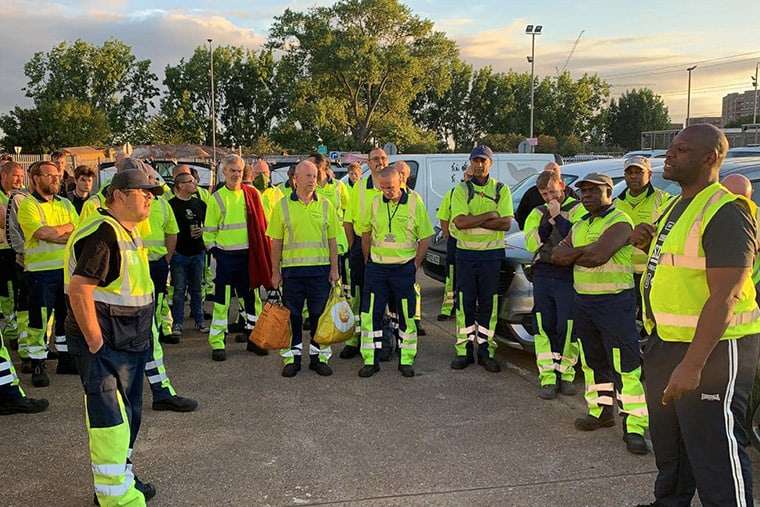 Newham workers are ready to fight for better pay

A wave of strikes over local government pay was to begin this week in Scotland.

Bin workers in the Unite, Unison and GMB unions, are beginning walkouts over the 2 percent offer tabled by Cosla, the pay awarding body.

The first workers to take to the picket lines were set to be Unite members in Edinburgh, who were due to strike from Thursday this week to 30 August.

They are scheduled to strike for four days from 26 August and then a further four from 7 September.

And the third wave of strikes will see bin workers in 15 councils walk out from 24 August to 31 August.

Workers will then be joined by some 1,500 ­strikers from councils already out and Angus, Dundee, Angus, Clackmannanshire, Dundee, East Ayrshire, East Lothian, Falkirk, South Ayrshire and West Lothian.

Wendy Dunsmore, Unite regional officer said, “Council workers have had enough of sub-standard settlements and deserve a decent wage to sustain their families given the inflation predictions and soaring food and energy prices.

“The failure of both COSLA and the Scottish Government to work to bring an improved offer to the table that could have halted this action means any blame for where we are now should be directed back to them.”

Local government workers across Scotland were originally offered just a 2 percent “rise” to their pay packets.

Yet with the threat of strikes looming, local governments have been offered an additional £140 million to fund an improved offer.

It shows how the mere threat of workers’ action can focus the minds of bosses.

Yet even with the extra cash, workers are only being offered around 4 percent—and that’s less than the offer in England and Wales.

Bin workers in Newham, east London, are set to strike from Saturday of next week, 27 August after a massive vote for action over pay. An extraordinary 99 percent of Unite union members who voted backed strikes on an 81 percent turnout.

The workers are paid far less than refuse workers in neighbouring Hackney and Greenwich. For example an operative in Newham earns £22,850 a year compared to £24,763 for a worker in Greenwich doing the same work.

Further action is planned, and it could link up with strikes in Hackney.

Refuse workers in Elmbridge and Surrey Heath, who are outsourced to sub‑contractor Amey, have voted to accept a new pay deal.

The members of the GMB union planned to strike for three weeks but called off strikes after the “majority” of the workforce accepted a deal the union described as “above market rate.”

The members of the PCS union—who run contact centre and back office roles for the government’s Disclosure and Barring Service—are striking over pay.

Bosses at HGS offered workers a pay increase of just 3.25 percent. The PCS’s demands include a wage of at least £9.90 an hour, sick pay, paid breaks and annual leave of 27 days.

Legal advisers and court associates in magistrates’ courts across England and Wales have voted to strike over working conditions.

The members of the PCS union are fighting the rollout of a computer system that increases workload and stress, and slashes jobs.

Journalists ready to fight at Reach and The Scotsman

Journalists working for newspapers including the Daily Express, Daily Mirror and several major regional papers are to strike over pay.

The members of the NUJ union voted by 79 percent to strike.

Strikes are planned to take place all day on Friday 26 August and Wednesday 31 August, and for 48 hours on 14 and 15 September.

Meanwhile, workers at a number of Scottish newspapers have voted to strike against job cuts.

NUJ members at the Scotsman and Edinburgh Evening News voted by 93 percent to strike, while those at smaller weekly papers voted by 66 percent.

They plan to strike on 26 August and 2 September at The Scotsman titles.

The UCU union was set to launch a new campaign on Wednesday this week to build a “yes vote” for strikes.

UCU Rising is the latest project of union leaders who are finally realising it is essential to campaign properly to get workers to vote, and to vote for action.

In the last couple of years UCU members have struck many times in two separate but connected disputes.

The first dispute is over the USS pension scheme, and the other, known as the “four fights”, is over pay, equality, workload and casualisation.

Over time, the number of institutions reaching the anti‑union laws turnout threshold has fallen.

This is not because workers don’t want to fight.

Those at the top of the union have repeatedly demoralised and demobilised workers by choking off action and blocking activists’ demands for escalation.

And very short ballot periods have also affected the size of votes for industrial action.

UCU Rising is a sign that pressure from below is forcing union leaders to reflect at least some of what rank and file members have been saying.

A new avenue for workers’ participation is welcome.

But along with building this campaign activists must start agitating for a massive strike vote using all the methods they have used in previous disputes.

UCU Left, which Socialist Worker supports, wrote, “There are a range of tasks to be worked through from ‘Get the Vote Out’ preparation’ to organising rallies to launch the ballot. Activists are asking what they can do to help.

“We should treat every member as a potential activist, asking them to call meetings in departments timed for when the ballot begins.

“Members are extremely angry. They need to know that the union is serious about winning these parallel disputes.”

A massive vote for strikes could turn the tide for university workers. Ultimately it is workers organising from the bottom up that can win.