Home / News / Droughts are the torrid reality of climate chaos 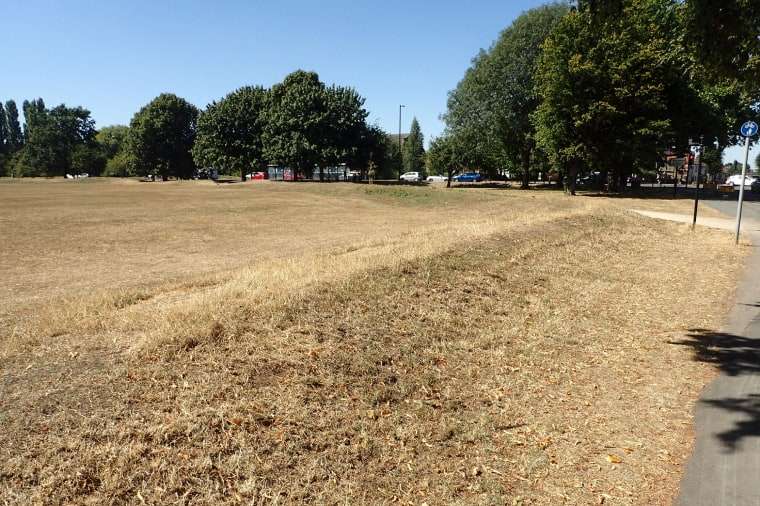 The sight of once green now scorched yellow places and depleted water sources is becoming commonplace as droughts take hold. Searing temperatures led to an official drought being declared in many parts of England including Cornwall, Devon, London, Kent, and the East Midlands on Friday of last week. The rest of Britain was considered by the Environment Agency (EA) to be in a “pre-drought” phase.

Meanwhile in France, the Loire, the country’s longest river, can now be crossed on foot due to slow flow. And parts of the Rhine spanning Germany and Switzerland can no longer accommodate boats. In Italy, the Po is 2 metres lower than normal, crippling crops as its valley accounts for over 30 percent of agriculture production.

The drought is a warning sign that water systems cannot cope with the changing climate. But while more hot dry spells are forecast, British water firms are failing to invest in the water networks. When drought hits, water collected from lakes, reservoirs and ­underground sources dries up.

These shortages will become more common as temperatures rise due to climate change. And it is a problem that will be made worse by a water system that is run for profit, and a government that is wilfully unprepared. While the government can ­officially declare a drought, the declaration hasn’t led to action or re-direction of investments.

Instead, water companies come up with their own plans. These often include measures that target ordinary people, such as hosepipe bans. But putting the emphasis on ­individual usage masks the failures of companies to keep the water flowing.

Water giant Thames Water was forced to admit that it loses as much as 600 million litres of water a day. This amounts to almost a quarter of all the water it collects. And across the industry the National Audit Office reported that three billion litres a day were lost through leaks. The system is poorly maintained and ageing fast.

In London 60 percent of water pipes were laid 60 years ago, and the oldest are 150 years old. In January 2021, broken pipes caused brown water to flow from taps in south London. A leaking and faulty system means there is less water available, but also that sewage regularly leaks into waterways poisoning rivers and ­killing wildlife.

The EA also found that water companies dumped raw sewage into rivers and the sea more than 200,000 times in England in 2020. Demand for water is set to exceed supply by 2050 due to rising temperatures. Action on climate change, along with the adaptation and the ­transformation of our water system, is desperately needed.

A leaking system is a product of the Tories’ drive to privatise the water industry. In 1989 Margaret Thatcher signed away control to a number of private firms. Today a tiny number of firms control the water supply in England.

Thatcher did the bosses another favour and wiped out the debt the water industry owed before complete privatisation. Since then, water companies have amassed billions in debt once again. But they’re not spending the money on maintenance. In fact no new reservoirs have been built for 30 years.

Instead, this money has gone into shareholders’ dividends, according to a study conducted by David Hall and Karol Yearwood of Greenwich University. Since 1989, the total amount of dividends paid has reached £57 billion. And while bosses pocketed their dividends, ordinary people’s bills have risen astronomically.

Some companies have reported meeting targets for how much water they leak. But Northumbrian Water, South West Water, Southern Water and Affinity Water are all missing theirs.

And when a leak is spotted water companies are often slow to deal with them. After a leak on Mount Road in Wolverhampton last week, Severn Trent was slow to respond despite its reservoir being just 58 percent full.

A privatised water system clearly does not work in ordinary people’s favour. Despite the money they make for themselves bosses are failing to meet our needs. Water must be wrestled away from neglectful companies and put back into public ownership for everyone’s safety.

For many, a rainfall after drought will feel like a relief. But hot temperatures prepare the conditions for deadly flooding. The soil can become too hard and dry to absorb that water quickly.

Heather Shepherd, flood recovery specialist at the National Flood Forum, said, “Really sharp, heavy, intense rainfalls after this sort of weather, which overwhelms really any kind of draining system or anything that’s in place, becomes uncontrollable and it’s usually this vast event where people quickly flood”.

…and then there are fires

Fires caused by scorching temperatures and drought have stretched fire services to breaking point. There has been an almost 500 percent increase in wildfires reported compared to last year.

Commenting on the increased demand for fire services, Andy Dark, FBU union assistant general secretary said, “Heatwaves have been on the government’s National Risk Register since its first iteration in 2008.

“Wildfire as a national risk was added to the register in 2013. Instead of improving fire and rescue services we’ve had 11,500 firefighters cut since 2010. If we are to properly protect life and property from wildfires the fire service urgently needs huge investment.”