Home / News / Rage against the Tories at hustings in Perth 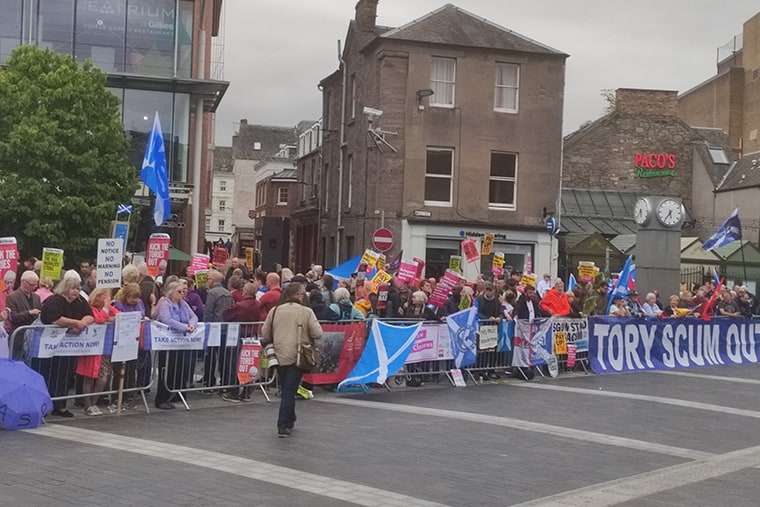 Many people had reasons to protest at the Tories in Perth (Picture: SWP Scotland)

Around 1,000 angry anti-Tory protesters gathered in Perth, central Scotland, on Tuesday to rage at the Liz Truss-Rishi Sunak hustings.

Anti-racists, trade unionists, pro-independence supporters, welfare campaigners, climate change activists and many others came to savage the leadership contenders. It was the biggest protest at a Tory hustings so far.

Protesters tried to break through police lines and some threw eggs at Tories entering the event. Activists greeted Conservative members with a chorus of boos outside the city’s concert hall.

Protest organiser Cat McKay from Perth Against Racism told Socialist Worker, “There is no way they couldn’t hear us inside the hall. It was a great atmosphere on the protest with lots of young people and  a great mix of activists and campaigners.

“For us the main issues were the Tory hostile environment towards refugees and migrants. But there were many other reasons to protest—the cost of living crisis, climate chaos, pensions and much more. We went away feeling stronger and more united. I’d encourage anyone else to go to a hustings and let your anger rip.”

Demonstrators blasted The Imperial March from Star Wars on a loudspeaker and a group of activists broke through a barrier intended to hold protesters back and tried to force their way into the venue. Police halted them as Tory members watched from inside just a few feet away.

Nurse Pauline Brady told the demonstration that health workers had rejected the 5 percent pay offer. She said, “This Tory government is trying to remove rights from workers and to make strikes ineffective.” She called for “all workers to go on a general strike and bring the country to a standstill. United we can win.”

Inside the hall, top Tories referenced the protests. Andrew Bowie, MP for West Aberdeenshire, has the task of introducing Sunak. He denounced the “politics of gripe and grievance, of division and hate, that we have seen outside this hall tonight”. He wrongly said the protests were led by the Scottish National Party (SNP).

In fact David Linden, the SNP MP for Glasgow East reply to Tory slurs by saying militant protesters, “don’t speak for me or my party. We condemn their behaviour utterly and without equivocation. If anyone of them is found to be an SNP member, then they should be chucked out immediately.”

Anti-austerity campaigner Sean Clerkin told the Daily Record, “I’m here to call for support for the many Scots who face a winter without being able to afford heating.”

Stand Up To Racism supporters were there to show their anger against the state’s assault on migrant and refugee rights, the death of Sheku Bayoh after police contact, and the government’s attempt to start deportations to Rwanda.

Protesters chanted, “Refugees are welcome here.” In the run-up to the hustings, Truss has vowed to keep the Royal Navy in charge of patrolling the Channel to confront refugees and migrants after it was revealed that it planned to withdraw from the role next year. At hustings, she pledged to expand the Rwanda scheme to other countries.

As the strikes and protests grow against the Tories, hustings are a good chance to take the fury to Sunak and Truss.