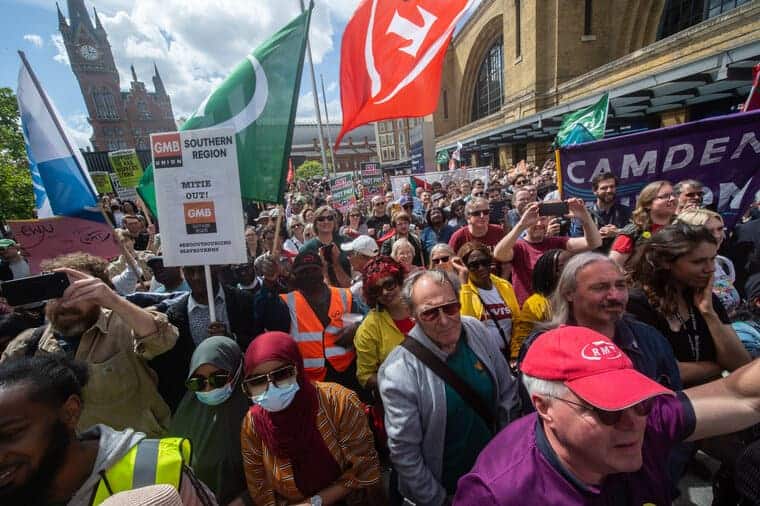 Strikes by tens of thousands of workers this week should be the first shots in an even bigger war against the Tories and bosses. Rail workers in the RMT union are striking for two days this week, and they will be joined by London Underground workers and bus ­workers as well.

This will mean that transport will grind to a halt, particularly in London. Rail workers are fighting for a pay rise and also against job cuts that threaten safety. In response to action, Tory ­transport secretary Grant Shapps has made further brutal attacks. He told the Daily Mail newspaper that the days of union power “are numbered”.

He is also preparing to ram through Section 188 legal warnings to make trains guard-less. And he confirmed that laws to impose minimum service ­requirements—strike bans—are “written and ready to go” for the new prime minister to pass through ­parliament by the autumn.

‘We’re going to win this. I’m afraid for the unions this is their last stand,” he said. The Tories are preparing to wage war on trade unions, but workers can fight back.

The best way to guarantee the Tories take a “last stand” is to extend the strikes, for workers to strike together, more self-organisation from the ground up and more militancy. The week after the rail workers, 115,000 postal workers in Royal Mail will strike.

Bosses imposed a 2 percent ­wage-cutting “rise” that was nearly 10 percent below the rate of ­inflation. And they will soon be joined by 40,000 BT and Openreach workers on 31 August. Every rail worker—in the RMT, Aslef and TSSA unions—should be out together on that day with them. That would mean over 250,000 ­workers could unify and strike together.

Network Rail worker Dan, from the West Midlands, told Socialist Worker, “We are all facing a similar attack on our pay, and the impact of all of us going on strike would show how much power we hold as a class.”

The 31 August should be “Walkout Wednesday”—this could be a day of mass strikes, rallies, and demonstrations and would be a call for every worker to take action. Existing local battles by bus ­workers, bin workers, health workers and even barristers could be part of it.

Strikes can go much further than just the organised unions with strike mandates. Workers at Amazon, in construction and at an oil refinery have all walked out on wildcat strike recently. A mass movement, built from the bottom up, would give others the confidence to fight.

Non-unionised, retired and ­unemployed workers should join striking workers on picket lines and on protests. Climate change and anti-racist activists should mobilise and campaign with the trade union ­movement to be part of the fight to get rid of the Tories.

The only obstacle to this massive acceleration of struggle is if union leaders drag their feet and settle for less. This is a time of increasingly stormy class struggles.

Don’t leave it to union leaders

As anger against bosses and the Tories escalates, union leaders must not be allowed to agree to below-inflation deals. Train drivers in Wales in the Aslef union are being offered a 6.6 percent pay rise that union leaders are tempted to accept.

But with inflation far higher than that, it’s a significant cut in real terms. An Aslef official told the I news site, “We’re not actually asking for 9 percent, 10 percent, 11 percent—we have accepted a middle ground.”

They added, “What’s the point of saying 11 percent when you won’t get it? We’re not stupid.” The point is that workers can win 11 percent—and more—if they fight effectively.

And Unison union leaders have so far refused to make a recommendation on whether thousands of local government workers in England and Wales should accept a deal that will cut their pay. Nor did the Unite union leaders at Arriva North West. The battle can’t be left to the union leaders.