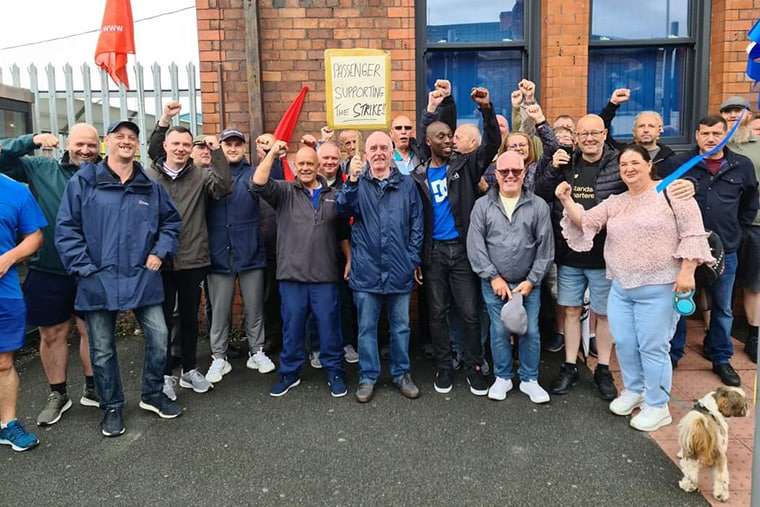 The pressure is mounting against Arriva as the indefinite strike continues

Arriva bus drivers in the north west of England have overwhelmingly rejected a 9.6 percent pay offer and will continue their month-long indefinite strike.

Their refusal to accept a deal below inflation shows how workers are feeling more confident to chuck out offers that might have seemed acceptable a few months ago.

The 1,800 workers at 11 depots have been on strike since 20 July. Unite union reps will soon discuss the next steps to step up pressure on the bosses.

The combined vote of Unite and GMB union members was 1,449 votes against the deal and just 380 for it on a 84 percent turnout. It follows a rejection of 8.5 percent two weeks ago. The vote came despite Unite making no recommendation on whether to accept or reject.

George Patterson, GMB regional organiser said, “Working people are facing the worst cost of living crisis for a generation. These drivers are fighting for a fair pay rise to help them through it.

“We need something better from Arriva. Bus drivers need to know that they’ll be able to cover their bills.”

A big factor in the rejection was the huge pay gap between depots and grades. Drivers at Winsford are paid just £11.08 an hour compared to about £13.50 for drivers in Birkenhead for the same work.

The drivers were right to reject this pay offer, with inflation at 12.3 percent the offer was a 2.7 percent real terms pay cut.

Patterson said drivers are demanding £15 an hour across the board. That—if achieved—would mean drivers in Winsford would win a 35.4 percent pay rise and would be a huge blow to the bosses who said that a double digits offer was impossible.

As the offer was rejected all Arriva buses in the north west remain sat in the depots. Just some specific hospital routes are running.

The fight against Arriva bosses is growing around Britain. Strikes are set to hit Arriva in Bedfordshire, Buckinghamshire and Hertfordshire as 900 workers rejected 4 to 6 percent pay offers. And workers in Kent, Essex and north London are all currently being balloted to strike.

The pressure is mounting against Arriva—they could have almost 5,000 workers on strike in September if the union officials act quickly. This would massively increase the pressure on the firm.

It would also give confidence to other bus workers.