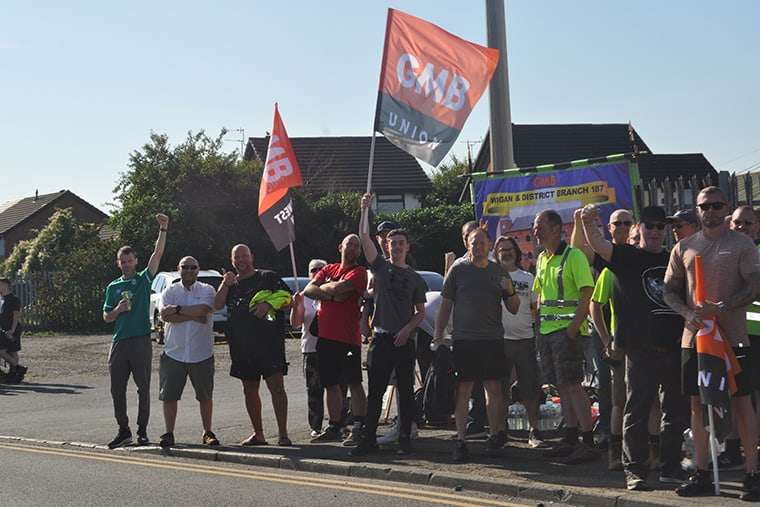 More than 100 workers in the GMB union at Pemberton Park and Leisure Homes (PPLH) in Wigan have been striking over pay and working conditions. The action began on Wednesday of last week.

The company initially offered a 3 percent pay rise. This increased to 3 percent with a lump sum after talks, and then bosses imposed 4 percent. After discussion with its members, the GMB pushed for 10 percent plus an improvement in working conditions.

Strikers say PPLH made £8.5 million profit and paid £3 million in dividends to shareholders. Yet workers are paid just £12 an hour

Striker Jason described working conditions as “appalling” and other workers described them as “Dickensian”.  They said bosses were completely inflexible and bullying.

Others complained that because of low pay and poor conditions the company found it difficult to recruit and this resulted in them employing agency workers on higher hourly rates of pay. The picket was large, serious and friendly. One non-union member refused to cross it.

Paul, the local GMB rep, said that earlier in the year there were 33 union members. But with the level of anger and a possible strike looming this had risen to 106. It’s another example of how struggle builds unions.

GMB organiser Steve Whittle said, “Workers at Pemberton Caravans have seen a doubling of profits, only to see £3.4 million shared among three owners but union members got offered a 3 percent increase.

“This is a workforce that has zero sick pay and is only able to book two actual holiday days a year with remaining holidays in fixed periods of the year at the company’s behest.

“We have seen the membership triple during this dispute, and we had a 93 percent turnout for a strike ballot with 89 percent voting for it.”

The local trades council and other trade unionists have supported the pickets.

Messages of support to shaun.buckley@gmb.org.uk