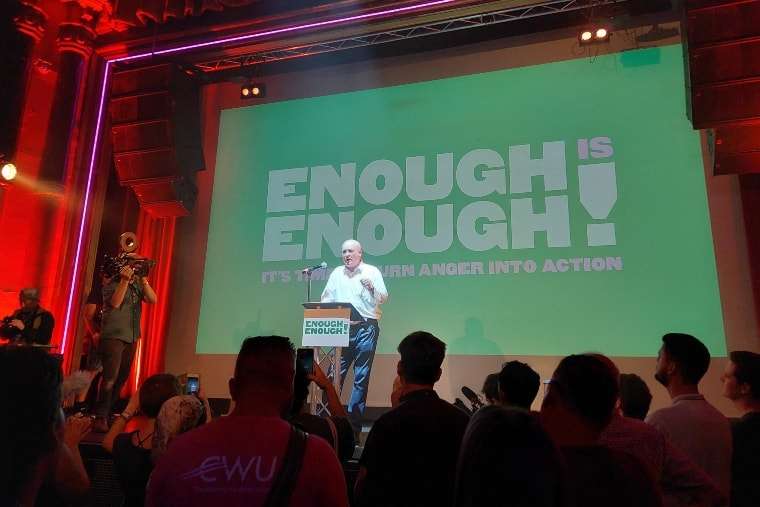 Mick Lynch of the RMT union speaks at the Enough is Enough rally (picture: Socialist Worker)

Over 1,500 people turned out to the Enough is Enough campaign launch rally in Clapham, south London, on Wednesday. It was full of an energetic sense of solidarity and renewed hope.

Announced just days before, the rally heard from trade union leaders Jo Grady from UCU, Dave Ward from the CWU and Mick Lynch from the RMT. Labour MP Zarah Sultana also spoke. Hundreds had to be turned away from the event that had reached capacity at 1,250 people.

Under the slogan “It’s time to turn anger into action” speakers discussed fighting back against the spiralling cost of living crisis. The rally demanded real pay rises, nationalisation to combat rising energy bills, an end to the need for food banks and skyrocketing rents and a policy of taxing the rich. Ward announced that 400,000 people had signed up for Enough is Enough.

It had some of the atmospheres of the Jeremy Corbyn rallies in 2015 or 2017. But this time the focus was on workers in struggle. There was strong support from the predominantly young crowd for the upcoming rail, tube, bus and postal strikes, with speakers urging solidarity.

Anger also rang out against the Labour Party and Keir Starmer. “It’s good we’re standing up for members’ terms and conditions,” Ward said. “But we’re also standing up for those outside work and the whole of society being ripped off.

“People say where is Labour? It’s up to Labour—this campaign goes on with or without it,” said Ward to huge roars of approval.

Lynch said, “Unions must lead, we can’t wait for the politicians. We need to get out into the communities and the former red wall to assist them to campaign. We need to show them how to organise. Our job as activists and trade unionists is to lift them, give them hope and get them out on the streets.

“Join a union and join a campaign. Move the workers into campaigning and convert it into a wave of solidarity and industrial action across Britain.”

The size of the turnout shows a mood for change, and to do something about growing poverty and falling wages. Enough is Enough is an important meeting point for big numbers of people who feel lifted by the strikes and the chance to hit back effectively at the Tories.

Every socialist and trade unionist should be at its rallies and the other activities it says it will organise such as picket line solidarity and actions against the energy companies.

But while speakers pushed the need to support striking workers, trade union leaders were quiet on the need for escalating and united action. The sort of uplifting rally seen on Wednesday can help spread confidence and networks.

The most important arena is the strikes themselves. And they need to spread wider, be linked together and continue until victory. That’s why everyone should support the pickets in the next few days and be part of the push for strikes.

For details of Enough is Enough and events in your area go here
For further coverage see our website of the rally, follow updates on our website