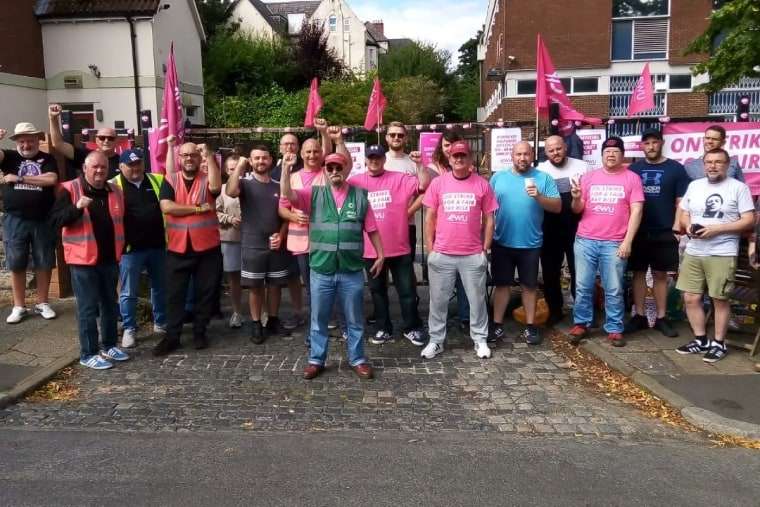 Inflation in Britain has soared to a record high. It now sits at 10.1 percent, the Office of National Statistics (ONS) announced on Wednesday. But it’s even worse than that.

But whatever way it is measured, the new figures indicate a real social emergency. Coming as no surprise to anyone who’s stepped foot in a supermarket recently, increased food prices are the main driving factor behind the rise.

The ONS said prices for staple foods such as bread, cereals, milk, cheese and eggs “increased notably.” Housing costs have risen by 9.1 percent in the year to July. Items under “recreation and culture”, such as pet food, holidays and hobbies, rose by 5.6 percent.

And transport costs rose at an annual rate of 15.1 percent. Fuel prices are up by some 43.7 percent in the year to July—the highest rate recorded.

The inflation rate analysis comes hot on the heels of the ONS’s announcement that workers’ pay is falling at the fastest rate for 20 years.

Annual wage growth grew by 4.7 percent in the three months to June—making workers’ suffer a 7.6 pay cut. And the data revealed pay in public sector jobs grew by just 1.8 percent. It means a horrifying pay cut for millions of workers.

Tory chancellor Nadhim Zahawi mewled that “getting inflation under control is my top priority.” “We are helping where we can,” he claimed.

But the Tories’ help—just £400 for every household, and another one-off payment for those on very low incomes—doesn’t go nearly far enough.

Even the rich are becoming frustrated at the Tories’ inaction as the cost of living crisis deepens.  Asda chairman Stuart Rose reacted to the news by blasting the government. “We have been very, very slow in recognising this train coming down the tunnel and it is now here and it’s going to run quite a lot of people over,” he said.

“Nothing is happening, we are sitting here into the fourth month into this crisis and we’re still waiting to see what action will be taken. It’s horrifying.”

At the top of everyone’s minds is that soaring inflation is only part of the picture. The Bank of England is expected to raise the interest rates when it meets next month. Further interest rate rises spells disaster for those paying off mortgages, loans or credit card balances.

And energy bills—already outrageously expensive—will rise by 80 percent in October and again in January 2023.

Data from the Institute of Fiscal Studies show that high energy prices affect poor families more, as they spend more of their budget on fuel.

For the poorest in society, inflation soars to 18 percent, compared to 11 percent for the richest.

Jake Finney, economist at accounting giant PwC  said, “We expect inflation to continue rising in the next few months, reaching its peak in January 2023 as the energy price cap is uplifted once more and household energy bills potentially exceed £4.2 thousand a year. Though some of this impact could potentially be offset by additional government support.”

Grim statistics and pathetic Tory soundbites can feel really demoralising. But people’s frustration can be pulled into a sense of resistance.

The upcoming national strikes in the rail, telecoms and post industries—alongside the wildcat walkouts by Amazon and construction workers—point to a new mood of resistance. It’s important to celebrate these struggles—and fight to spread the revolt.