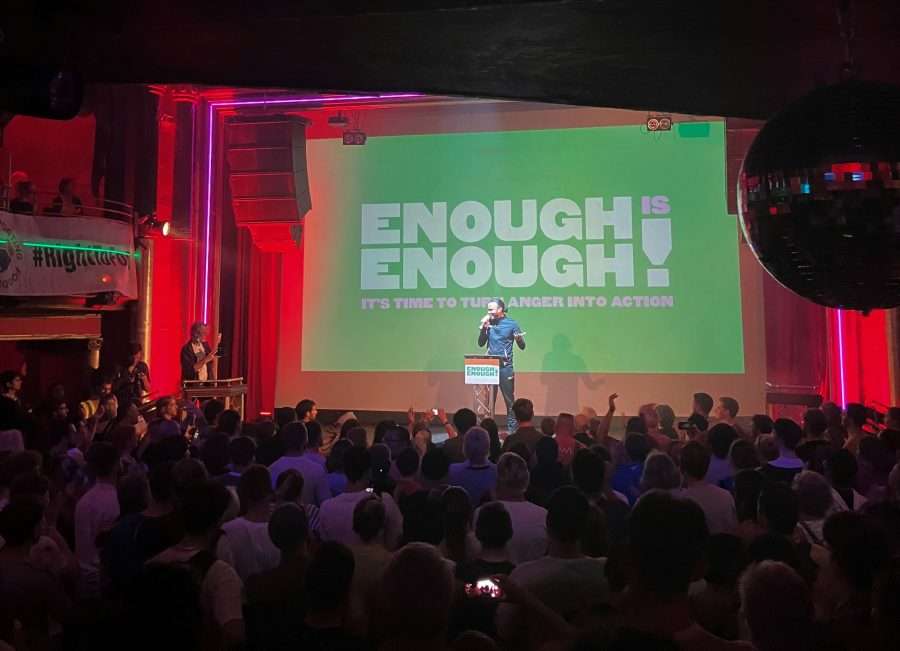 Last night saw Mick Lynch, Zarah Sultana, Dave Ward and others address thousands of people at the Enough is Enough campaign launch in London. We spoke to attendees and speakers about how the moment to fight has arrived.

‘Why wouldn’t you be here?’ asks Tommy, a thirty-three-year-old electrician standing in a queue outside the Clapham Grand on Wednesday night. ‘It doesn’t take a genius to see this country’s going very, very downhill, and fast. Not,’ he adds, ‘that I don’t feel hopeful about stopping that.’

‘Hopeful’ isn’t a word many would use to describe Britain right now. Those in power have abdicated any responsibility for alleviating a cost of living crisis that will soon become lethal, while the opposition have largely failed to mount a serious challenge. It is predicted that households will be paying more than £4,000 for their energy from January, while the prices of everything from rent to food is spiraling and inflation reaches a new forty-year high. Food banks are running out of food. Eviction orders for rent arrears at their highest since records began. In many ways, things look bleak.

But this crisis has also prompted resistance, spearheaded by the rail workers’ ongoing strikes against the forcing-through of devastating job losses and real-terms pay cuts. Throughout the summer, a wave of workers—from call centre workers to lawyers, journalists to cleaners, brewers to bus drivers—have taken part in industrial action against the fastest fall in real wages on record, and against a system that sees poverty enforced on a mass scale to protect the obscene profits of a tiny number at the top.

Out of this wave comes Enough is Enough. Launched by trade unions, Fans Supporting Foodbanks, ACORN, and Tribune, the campaign’s five demands—a real pay rise, slashed energy bills, an end to food poverty, decent homes for all, and proper taxes on the rich—have seen it gain over 400,000 supporters, several thousand of whom gathered on Wednesday night for an opening rally.

‘It’s first reaction, you know—if there’s union action, you support it. These are working people trying to defend pay, conditions, standard of living, standard of life. You must support it.’ These are the words of beloved poet and children’s author Michael Rosen when asked why he came out to speak at the rally yesterday evening. His enthusiasm is palpable. ‘I think this is one of the most promising campaigns I’ve seen, and I’m seventy-six.’

Rosen explains that he first heard the phrase ‘enough is enough’ in his father’s language, Yiddish: genug iz genug, ‘which my father learned at the foot of his grandfather, his zeyde, who was a union militant and a member of one of the first socialist parties in this country, the Social Democratic Federation in the 1890s.’ For Rosen, the familial connection to collective politics is a running theme: onstage, he tells two stories—one of his mother giving him money to put into the collection bucket of striking bus workers on his way to school in 1959, and another of his grandfather using a match allegory pulled from Aesop’s Fables to describe the source of trade union strength. ‘A union is a box of matches: you take one match, you break it, take two matches, you break it, you take three matches, you break it; the whole box, you can’t break.’

When asked why she’s speaking at the rally, Helen O’Connor, who worked as a nurse before becoming a GMB organiser in the NHS, answers that it is because ‘everything’s out of control at the top’. ‘For too many working-class people,’ she tells Tribune, ‘things are being rolled back to Victorian times. Many workers in the NHS are using food banks already, struggling to pay rent and bills. So what’s coming down the line—it’s going to plunge people into absolute destitution.’

For Helen, the articulation of Enough is Enough’s five demands is a step towards an answer. ‘We need to push to make demands around our interest,’ she says. ‘We need to push forward with this work and link up everything and be organised properly, to reach out to people who are struggling and suffering, pull them into the campaign, and mount a serious challenge to what’s going on. We need to make sure our voices are heard as working people who have to sell our labour to live.’

‘The trade union movement is at the forefront of fighting for real pay raises,’ adds Labour MP Zarah Sultana. ‘Too many workers are living off poverty wages. What this campaign does is bring together the labour movement, social movements, organisations like ACORN, organisations like Fans Supporting Foodbanks fighting poverty in our communities, individuals, activists, and politicians, and it’s showing we need to come together.’

Zarah sees the campaign as a chance to overhaul the gross injustices that have become normalised in everyday life. ‘We need to make sure that food poverty is something that we only talk about in historical terms,’ she continues. ‘There should not be food banks in this country.’

The mood among these speakers is one of both optimism and anger: not just at how workers have been abandoned in this current crisis, but how they’ve been abandoned over decades. Housing campaigner Kwajo Tweneboa agrees. ‘I think sometimes it’s okay to be angry, especially in situations like this, because you’re not getting what it is that you deserve, what you should be getting. It’s about turning that into a positive to enforce and create change.’

After growing up in crumbling social housing run by neglectful social landlords, Kwajo has become known for publicly documenting the squalor to which tenants are subject. Reflecting on Wednesday’s post-drought storm which drenched London, he points out that the torrent will mean nightmares for the countless residents living under collapsing roofs and leaky ceilings. This year’s crisis is only the latest incarnation of the process which forces people into such grim situations.

‘For those with power, this cost-of-living crisis probably won’t affect them that much,’ Kwajo adds. ‘They can afford to ride it out. But the bottom line is that people will die as a result of this. In various sectors, whether it’s housing or the NHS, you name it—people will die, come winter. That’s what me and others are trying to prevent.’

So how to turn that anger—the fire of cheers and claps that met each of these speakers as they took the stage at the rally—into action? Speaking to Tribune after his headline slot, RMT general secretary Mick Lynch explains that events like this one are only part of the picture: getting out into the community and building relationships is key. ‘People have got to get out and support strikers,’ he says. ‘They’ve got to be in the campaigns that go down to the estate, to your libraries, your park, housing—all those issues have got to be turned into real campaigns, real support.’

For Mick, that means emphasising what unites all those that get screwed by the present system. ‘We’ve got to get all the unions involved, we’ve got to link up with all the other campaigners and not be sectarian—we’ve got to make it as broad as it can be, so that as many people as possible can get behind it.

‘It goes back to fundamental basics of solidarity and unity—to say, look, the problems in front of us are bigger than some problems we might have between us,’ he adds. ‘So forget about those divisions. Let’s get on.’

After the rally, people begin wandering outside, their faces shiny from the heat inside the venue now lit up unexpectedly in the campaign’s colours, green and pink. Rushing back to his car, Tommy felt more inspired than when he went in. ‘Some of that was absolutely quality,’ he says. ‘I really hope an army comes out of this, because at this point, honestly, fuck the politicians.’ For Aine, a forty-one-year-old cleaner from Dagenham, seeing Michael Rosen and Mick Lynch meant that ‘the hell I went through sorting the childminder was worth it’.

Near Aine is Anahita, a recent university graduate. With her mother working in the NHS, she saw the impact of the pandemic first-hand and is deeply worried about going into yet another crisis. ‘I think I’ve been sat in this anxiety for a while—this abyss of what’s going to happen,’ she says. ‘At least people are coming out and doing something with it, so I feel hopeful.’ Near her is Narayan, a charity worker. ‘The rally was amazing—you could sense that atmosphere. People were really emotive inside.’

But reminders of the factors that brought us here are everywhere. ‘In this city, at the moment, in a city of thousands, people are fed up of seeing violence, and not just from each other, but from the state itself,’ Tom, a union organiser, says. ‘If you live in housing associations, you have mould growing up your walls, you have disrepair, the ceiling coming down. In the workplace, you’ve got bullying, you’ve got sexual harassment, bosses that don’t give you a pay rise.’ Crucial to Enough is Enough and its potential strength is the articulation of these issues not as distinct, but as inseparable.

For many who came to the Grand, sustainability is now the main question. The feeling on the street is the bright buzz of something beginning, but everyone is keen to point out it’s only long-term work in communities and workplaces that can make a movement. ‘What’s going to sustain this isn’t some new flash-in-the-pan, photo-op kind of thing,’ says Tom, echoing the words of many of those Tribune spoke to throughout the night. ‘We’ve got to organise ourselves so that whenever a chance comes to us, we’re prepared.’

To hear about rallies and groups near you, sign up to Enough is Enough.