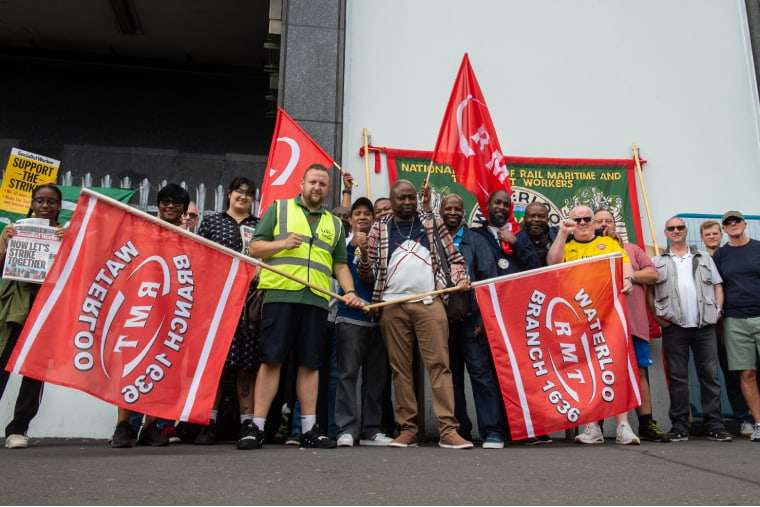 As over 40,000 rail workers continued their strikes on Thursday a key union leader said Britain is on the brink of “synchronised strikers”. And some strikers are calling for escalation.

The RMT and TSSA unions’ strike across Network Rail and 14 train operating companies shut down at least 80 percent of train services.

Workers are fighting for a pay rise, job security and against cuts that threaten safety. Lee, an RMT rep at Waterloo Station in London told Socialist Worker, “Our terms and conditions and our livelihoods have been attacked. They’re threatening to cut jobs, the lowest paid aren’t getting a pay rise even though they worked through the pandemic.

“I don’t think that’s acceptable but it’s happening everywhere and all workers need to unite and stand up because we deserve better.”

Dan, a Network Rail worker in the West Midlands told Socialist Worker, “I would like the TUC to call a date where rail, Royal Mail, BT, Post Office, council, teaching and healthcare workers go on strike.

“We are all facing a similar attack on our pay and the impact of all of us going on strike would show how much power we hold as a class. It could be the closest we have been to a general strike since 1926.”

That argument is getting an echo at the top of the union. RMT general secretary Mick Lynch said, “There is a wave of reaction among working people to the way they’re being treated. People are getting poorer every day of the week. People can’t pay their bills. They’re getting treated despicably at the workplace.

“I think there will be generalised and synchronised action. It may not be in a traditional form.” Such words need to be turned into action.

Unison union activist Jon Woods reported from the Portsmouth picket line, “There was support for unions to coordinate strikes so new prime minister has to face country in gridlock from day one.

From Hull socialist Eleanor said, “Pickets spoke of joining up with other workers for a day of action”.

Carlo works for Greater Anglia in north London. He told Socialist Worker, “This strike is more important now than when we first struck. Yes, we have our own demands—that Greater Anglia bosses haven’t given us—but every worker in this country is now following us.”

It’s like the rail strike has been an “inspiration” for other workers, added Carlo. “Now we need to take the strike further, one or two day strikes just aren’t enough.

The workers on strike on Thursday. Their action comes as London Underground, Overground and London United bus workers are set to strike on Friday.

The buses will stay out on strike on Saturday meaning travel disruption will be felt on a much larger scale. Transport for London says the united action by Unite union and RMT members will disrupt services until midday Sunday.

Despite the disruption, Lee said the picket lines have received “very strong solidarity” and that “public support is growing everyday”.

The rail bosses, buttressed by the Tories, are holding out against the unions. Escalating action and synchronised strikes with other unions would turn the screw on the companies and the government.