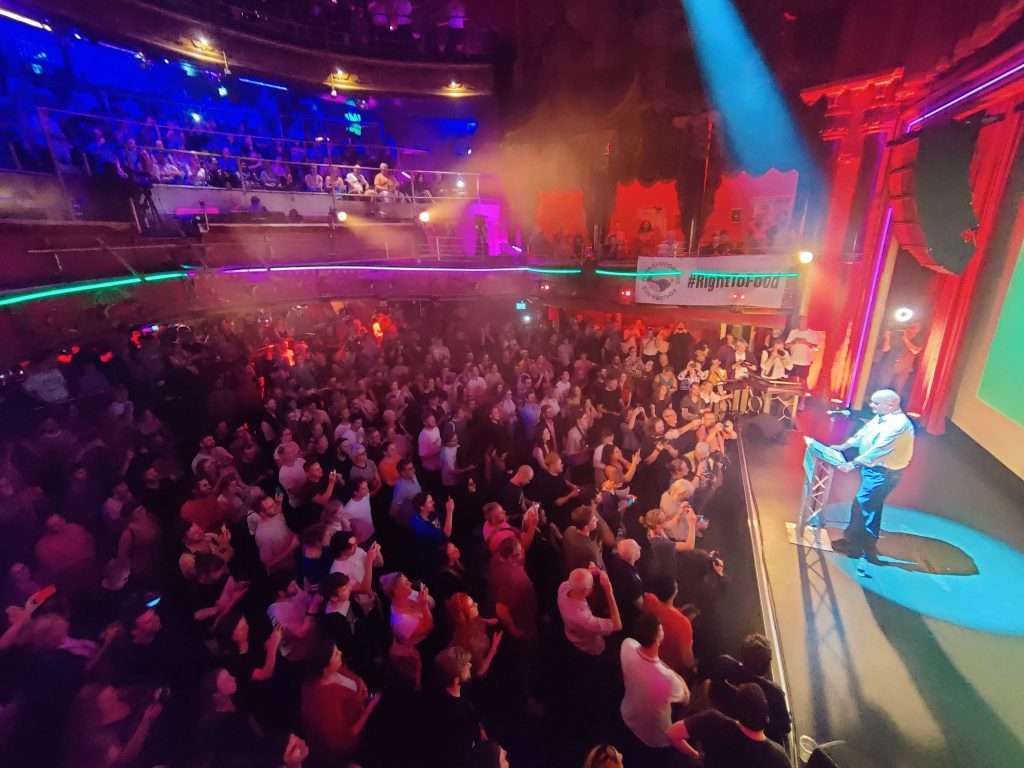 Mick Lynch speaking at the rally

Over a thousand people packed the Clapham Grand in South London on Wednesday night for the first rally for Enough is Enough, the cost of living campaign launched by the RMT, CWU, Acorn and others, and now also supported by the UCU. This wasn’t your typical left wing meeting with chairs in rows and speakers sitting at a table – you arrived at something like a club with mostly young people drinking and chatting. Speakers were met with huge cheers from a crowd with standing room only, and people were turned away for lack of space after the queue to get in went round the block outside.

Of course what’s make the difference and brought this vibrant energy is the anger millions feel over the cost of living, fear about their bills this winter and the workplace fightback currently led by the RMT and CWU. The same day as the rally that fightback continued with CWU members voting for strike action in Royal Mail by an extraordinary 98.7 percent. Now Enough is Enough aims to join up those workplace struggles with community groups and create a campaign for the whole working class.

That means rejecting attempts to divide working people, and Dave Ward of the CWU, the first speaker, stressed the importance of fighting racism. Introducing Jo Grady of UCU, the chair highlighted that union’s strong support for trans people. Dave Ward talked about the need to involve people who aren’t working, and housing activist Kwajo spoke about the appalling housing conditions affecting so many.

Many speakers condemned the Labour leadership for its failure to support the strikes and make any meaningful proposals around the cost of living. Labour MP Zarah Sultana got huge applause when she told the audience, “This is the lesson some people in my party need to learn about when people go on strikes. It’s not workers versus the public. It’s workers versus bosses – pick your side.”

If the event recalled the first, initial enthusiasm around Jeremy Corbyn with its anger at the status quo and its desire for change, it also, as Dave Ward highlighted, had something in common with the early days of the pandemic – the sense of a collective response, the need for a different kind of social structure. One of the biggest cheers of the night went to a People’s Assembly speaker when she told the crowd “we’re demanding a socialist society”. Now that demand is strengthened by the direct links to major unions in struggle – later this month some 170 thousand CWU members will be out on strike, along with thousands of rail workers and after wildcat strikes have broken out at Amazon warehouses in the last week. Jo Grady talked about how UCU action won permanent jobs earlier this month for 4,800 Open University staff previously on temporary contracts, and Michael Rosen spoke about standing on the recent UCU picket line at Goldsmiths.

The final speaker, Mick Lynch of the RMT, described how the government’s initial strategy of attacking and trying to isolate rail workers had backfired – instead, it has sparked widespread solidarity. Now, Lynch continued, “We’re in a class struggle. They want to cut your pension. They tell you to shut up at work. They say we need to deregulate. It’s being done to us by Etonians, people from Winchester. As soon as Truss gets in she’ll restrict protest… They are taking a turn to the hard right. They are hard right extremists.”

“They act in their class interests, it’s time for us to act in ours,” Lynch told the rally. “The working class is back. We refuse to be humble. We refuse to be poor any more. We will organise every sector in our class. Join a union. Involve other members in campaigning. Kick the officers in your union into activity. Change your officers if they won’t campaign.”

Enough is Enough was a broad campaign, Lynch stressed, involving the People’s Assembly and many other forces. One of those should be the Don’t Pay campaign, whose leaflets were well received in the queue to get in, but which unfortunately wasn’t mentioned from the stage. There is the energy for many campaigns, working in different ways – they all deserve support.

What next for Enough is Enough? More local rallies are already scheduled and local branches are on the way. The campaign will be organising picket line solidarity as well as other mass actions to put pressure on the energy companies. If you aren’t on their mailing list, join the 400 thousand people who have joined it in the first week and get involved!