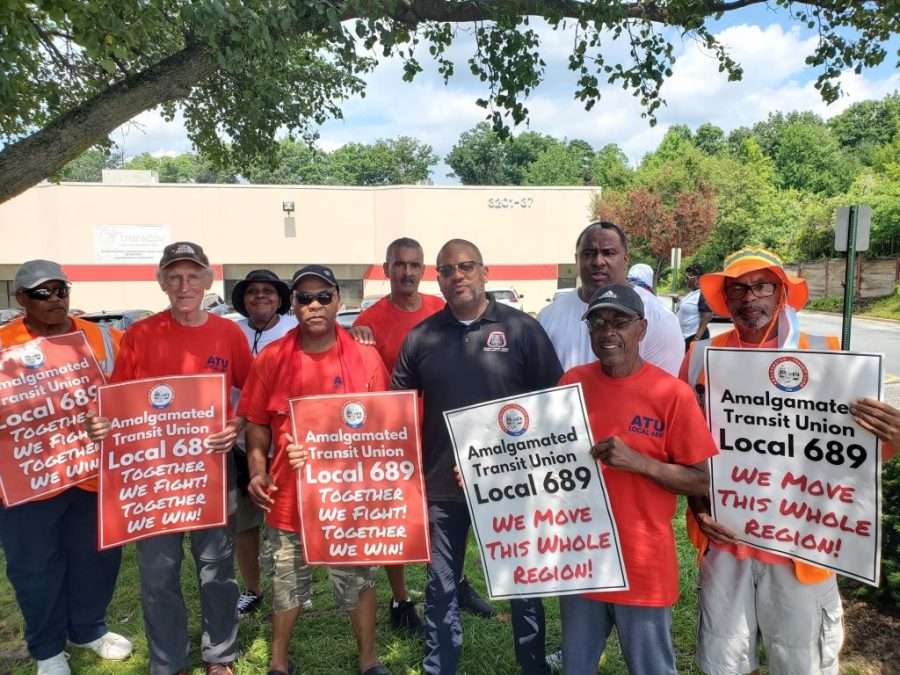 MetroAccess is a Washington, DC–area public program that provides door-to-door service for disabled residents. This month, MetroAccess workers struck for nine days, demanding better pay and benefits — and with the support of paratransit users, they won.

On August 9, paratransit workers for MetroAccess filled an assembly room at the Amalgamated Transit Union (ATU) Local 689 headquarters in Forestville, Maryland. On the other side of the bargaining table sat two lawyers representing the public transportation operator Transdev.

It was a striking visual: a sea of workers, some of whom had brought their children to this first day of contract negotiations, directly confronting their corporate employer for better working conditions. They’d been on strike for eight full days.

A day later, after nine days on the picket line, the workers walked away victorious, securing a tentative contract agreement that included wage increases and dental and vision insurance.

MetroAccess is a Washington Metropolitan Area Transit Authority (WMATA) program that provides a door-to-door transportation service primarily used by seniors and disabled residents in the Washington, DC, area. The service is crucial for helping riders get to work and appointments and provides general freedom and mobility for those who aren’t table to take public transportation.

In 2018, WMATA awarded Transdev a contract worth $242 million to run 35 percent of its paratransit operation. Transdev is a France-based international firm worth $1.1 billion. The company employs over two hundred dispatchers, maintenance workers, paratransit drivers, and road supervisors who work out of the Hubbard Road MetroAccess facility in Landover, Maryland.

The workers’ union, ATU Local 689, alleges that Transdev put forward contract provisions that were unacceptable, “[doubling] down on its bad faith bargaining and unfair labor practices that make a fair contract impossible.” In July, union members voted 96 percent in favor of authorizing a strike that began on August 1.

Workers say poor wages, squeezed further by inflation, and long hours were key motivators in authorizing the strike. Nicolette Clyburn, a paratransit driver who has worked at MetroAccess for sixteen years, describes the work as grueling. “We’re working twelve-hour shifts, and you’re doing that four to five days a week,” Clyburn told Jacobin. “You’re just tired. You have no time for your family.”

Despite having been with the company for almost two decades, Clyburn makes less than $25 an hour, and under the old contract she and her coworkers were not provided dental or vision care. Workers are only given two days of paid leave per year. Salaries at the Hubbard Road facility where Clyburn works are less than the salaries for MetroAccess workers in neighboring Baltimore — another sticking point during negotiations.

“You know the cost of living has gone up — groceries, gas, everything. And your money is not matching the cost of living.” Leading up to the strike “there were a lot of conversations going on,” Clyburn said. Transdev did not respond to Jacobin’s request for comment.

Disability activists, including those who personally rely on MetroAccess’s paratransit service, expressed solidarity with those on strike. Heidi Case, a paratransit rider and disability advocate, describes paratransit as an indispensable resource for disabled people living in the Washington, DC, area. “I actually moved to the DC area because of MetroAccess service,” Case, who is a wheelchair user, told Jacobin. Living in a more rural area without paratransit simply didn’t offer her the same freedom and quality of life.

Workers also received support from Carol Tyson, the government affairs liaison at the Disability Rights Education & Defense Fund, a civil rights law and policy center that advocates for the disabled community. Tyson attended a rally held before contract negotiations and boosted the strike on social media.

“The workers who provide community-based services to disabled people (e.g., paratransit workers, personal care attendants, and direct service providers) are often underpaid, with few or no benefits, and are often BIPOC,” Tyson told Jacobin. They added, “We can’t expect people to provide quality service to others when they don’t have the resources to meet their own basic needs.”

Transdev’s reluctance to negotiate and the subsequent strike have impacted MetroAccess service. Kevin Hallman, a shop steward and paratransit driver, says nonstriking drivers have picked up additional rides, leading to delays. Drivers have accommodated the additional work by loading more passengers into one vehicle than usual. Even so, “a lot of [clients] weren’t able to get to dialysis or to the doctors or to do their errands,” Hallman told Jacobin.

Even though the strike has interrupted the lives of riders who depend on MetroAccess, many are still in support of the workers’ struggle. “They want us to have a good contract,” Clyburn said. ATU’s international president John Costa affirmed that disability advocates have supported the strike by calling WMATA, Transdev, and local politicians about the issue.

Case is the chair of two committees that advise the city on accessibility issues. In a recent committee meeting, although it wasn’t about MetroAccess specifically, Case was able to speak with WMATA officials about the paratransit strike and offer support for their demands. WMATA did not respond to request for comment by press date.

With the new contract, workers secured increased wages — the wage floor is now $20.75 an hour and the ceiling is now $33.05 an hour, whereas under the old contract workers the floor was $17 an hour and the ceiling was $24 an hour. Under the new contract, workers will also have dental and vision insurance and a modest employer contribution to a 401(k) plan. Those at the Hubbard Road facility will also be paid the same as their counterparts who work in Baltimore.

The new agreement is an improvement, but many were still disappointed with the provisions. According to Hallman, some workers were intent on holding out for more, but they were outvoted. In particular, there was discontent about the wage ceiling — under the new contract workers will max out their salary after eight years. Those who have worked for longer than eight years, like Hallman, will not see their wages grow to accommodate their seniority.

When it comes to the contract’s benefits provisions, Transdev will only contribute 1 percent to employees’ 401(k) plan. The average 401(k) match by employers is over four percent.

This new contract also doesn’t address the union and workers’ broader concern that MetroAccess should not be run by a private company. “Local 689 believes that this is just another example of privatization as a failed model for public services,” the union wrote in a press release when it announced the strike. “Transdev has repeatedly tried to profit off of the work of our members, public taxpayer dollars, and payments from the riding public.”

Costa said that privatization inevitably leads to workers being squeezed by the contractor brought in to run the operation. “Their profit margin comes off of workers; they cut their salaries, they take away their benefits,” he said. “WMATA needs to bring it back in house and operate it at the prevailing rate that’s in the area.”

The fight to end privatization will have to wait for another day.

Even if workers weren’t able to secure everything they wanted, Hallman is still proud of the precedent he and his colleagues were able to set. He considers the contract strong and hopes other paratransit workers can use it as leverage in negotiating with their employers.