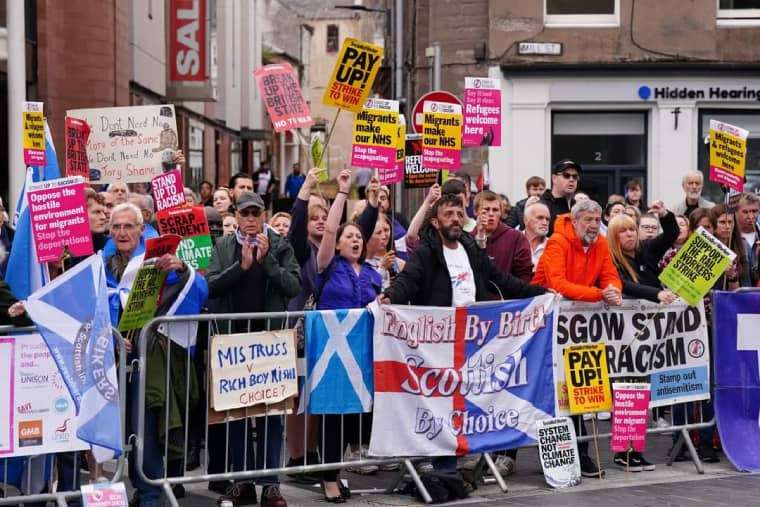 Politicians and the media have denounced people who protested outside the Tory hustings in Perth, Scotland, on Tuesday.

Tories claim protesters threw eggs at them, spat at a pensioner and abused Tory members attending the hustings with Rishi Sunak and Liz Truss. Protesters displayed a banner reading, “Tory scum,” and booed and shouted as the Tories walked in. They twice broke through police lines to shout from a closer distance.

The media coverage has focussed on alleged violence. It has ignored issues protesters raised—such as support for the rail strikes, opposition to the Rwanda deportations or the right to a new independence referendum.

A lot of the attention has been on a video showing a small group of independence supporters shouting at BBC Scotland editor Thomas Cook. The police themselves have admitted there were no reports of injuries at the protest. Yet they have also said they will probe the protest if any evidence of criminality emerges.

Disgracefully, Scottish National Party (SNP) politicians have joined in the attacks. David Linden MP said, “If any of them is found to be an SNP member, then they should be chucked out immediately.”

Joanna Cherry MP said aspects of the protest in Perth were “unacceptable”—bizarrely tweeting a video of two groups of protesters clashing outside the Scottish parliament in Edinburgh in 2019.

Rage against the Tories at hustings in Perth
Read More

The calls to denounce the protest have reached First Minister Nicola Sturgeon. She said, “I’m not responsible for it, I wasn’t in Perth. That wasn’t being done in my name—as far as I’m aware, it wasn’t SNP members doing that”. And she added, “If SNP members behave in that way, appropriate action will be taken.”

The SNP is wrong to attack those expressing their fury at the Tories.

Socialist Worker thinks people are right to throw eggs, shout and protest. The real criminals are the Tory government, the rich and their system. They condemn millions to starvation and freezing as prices rise and to suffer at the hands of a brutal immigration system and inaction on the climate emergency.

The way the SNP has distanced itself from the protests exposes the leadership’s timidity—and commitment to the system.

If they get nervous about a few eggs being thrown, they cannot be expected to defy the British state to hold indyref2 next year as they claim they are. They’re not going to use the existing devolved powers to tax the rich, give workers a pay rise or mitigate the worst aspects of the cost of living crisis.