Home / News / Tube and Overground network grinds to a halt as over 10,000 workers strike 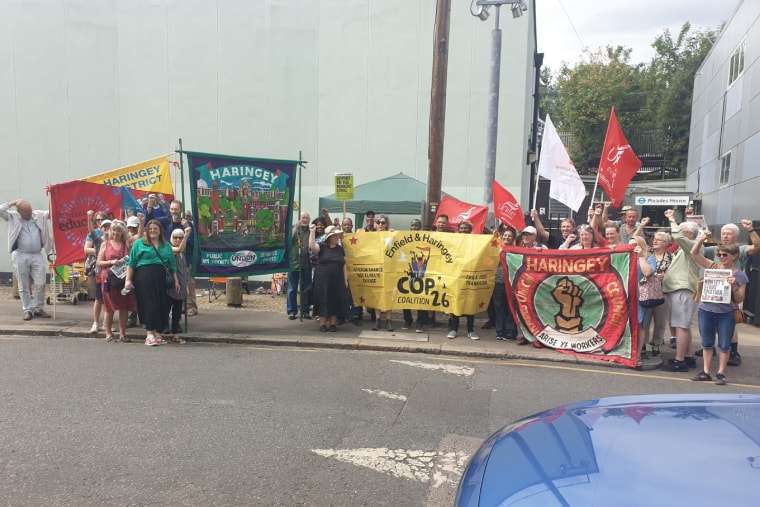 The Tube network ground to a halt on Friday as over 10,000 RMT union members at London Underground and London Overground struck over jobs cuts and pay. They were joined on the same day by over 1,000 Unite union members at Transport for London (TfL) and 1,600 bus drivers in the west of the capital.

Pete, an RMT member and Tube worker in east London, said workers across the board are saying “enough is enough”. “We’re all fighting the same fight, the same enemy,” he told Socialist Worker. “It’s good standing up and fighting back.

“The action has grown considerably and not just on the railways.”

Workers at the nearby Jubilee Line maintenance depot were in high spirits. Chris, an RMT rep, told Socialist Worker, “The whole line is shut down—I think that speaks for itself.”

He slammed management claiming that lower passenger numbers are a “justification” for cuts. “Instead of being properly funded like every other metro system in the world—which are majority government funded—we’re being run into decline,” he said.

London Overground worker Peter from east London told Socialist Worker, “I’ve never seen a strike quite like this, with this much solidarity. The crisis of inflation has everyone pushed up against a wall.

“They want to squeeze our wages, trash our terms and conditions and break our collective bargaining power. It’s part of a process that will make us permanently non permanent.”

Jonathan from the RMT East London Rail Branch added, “The only thing that makes management take notice is a hit in the pocket.

“We want a pay award in line with inflation. Some of our lower paid grades are already on the bare minimum of what the London Living Wage is. Food, gas and shopping are going up, and lots of people live in London so they’re not immune to rent increases.”

Yet, Jonathan explained, the majority of station delivery managers “were given a 10 percent uplift.”

London Overground worker Patrick said the RMT and other unions should “call more strikes—one day is not enough”. Another worker, Raza, agreed. “Arriva—who run London Underground—are refusing to give us a pay rise and want to cut the service even though the public are already suffering,” said Raza.

Meanwhile, 1,600 London United Bus drivers in the west of the capital struck to demand higher pay after rejecting a pay offer of up to just 4.2 percent. The Unite union members are set to walk out on Saturday, the same day as the over 40,000-strong national rail strike by RMT and TSSA members.

Over 30 workers joined a lively picket line in Shepherd’s Bush. They waved Unite flags, made lots of noise and held banners reading, “Bus drivers demand better,” and, “Solidarity and socialism.”

The unions should call longer strikes—and coordinate with rail, BT and post workers—to ramp up the pressure.