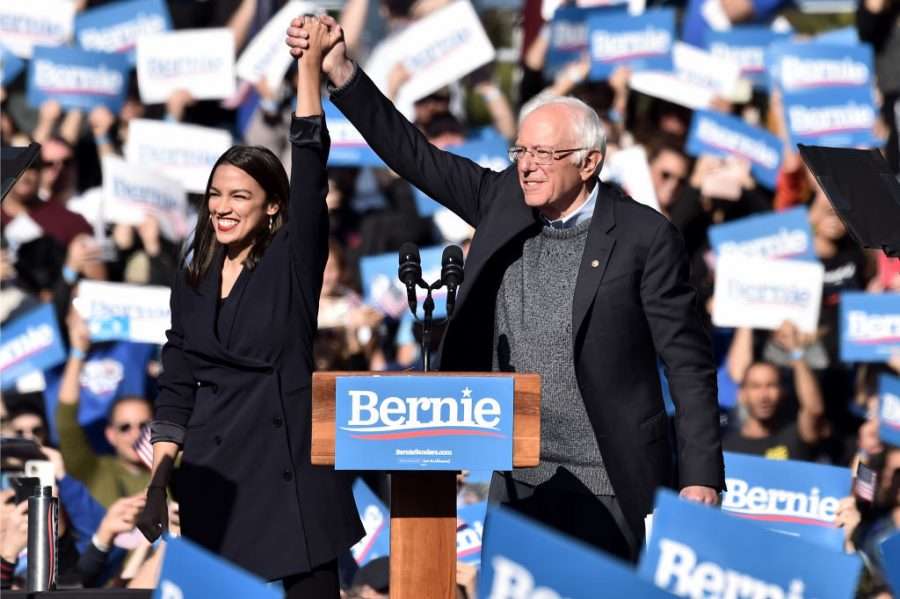 Everyone on the Left wants a more coherent, effective movement. But we’ll get there by devising creative new strategies for building our working-class base, not by launching yet another national progressive organization.

In their recent piece, “To Win a Political Revolution, We Need a New Mass Organization,” Jeremy Gong and Nick French argue that the Left’s inability to build effectively on the promising red shoots of the Bernie Sanders campaigns, the 2018 teacher strike wave, and other recent signs of left resurgence come down largely to a failure of organization. If Sanders and “the Squad” had acted together and formed a new, membership-based mass organization, they argue, the Left would be in a much stronger position today.

While we are sympathetic to the need for more effective coordination among left organizations, we believe Gong and French dramatically overstate the effect that consolidating left-wing forces would have today. Only by devising new and creative strategies for winning elections outside of Democratic strongholds and raising political awareness among disaffected workers through unions and related organizations can we get to the point where Gong and French’s call for a consolidated left might yield real dividends for working-class politics.

Putting the Progressive Cart Before the Working-Class Horse

Gong and French are refreshingly clear-eyed about the nature and scale of the US Left’s challenges today. They correctly stress that despite many important advances the Left has made in recent years, critical factors that might allow us to leap from Overton window–movers to influential policymakers remain out of reach — most notably, a strong base among workers and mass working-class organizations (particularly unions).

We don’t disagree that only new or revived mass organizations can get us out of the current impasse. In fact, we have argued separately for Sanders to create a coordinating body for his allied groups and for building a party-surrogate-type structure. We are also sympathetic to Gong and French’s call for an expansion not just of mass working-class institutions, per se, but specifically of democratic membership-based organizations that see electoral and community organizing efforts between elections as two sides of the same coin and depend primarily on funding from members rather than big-money donors.

While their diagnoses are sound, however, the short-term remedy Gong and French propose is unlikely to yield the effects they expect. How do you solve the crisis of weak coordination on the Left? Gong and French conclude the answer is to build new left organizations. They write that “the time is ripe for Bernie and the Squad to create a new mass organization to confront today’s crises.”

But given that a similar call for Sanders to create a new nonprofit (not even membership organization) got little play from the Vermont senator, that Sanders has distanced himself from Our Revolution (a membership-based activist organization founded in 2016 to continue his first presidential campaign’s legacy), and that the Squad members have shown zero interest in creating such an organization, it’s unclear why suddenly any of these figures would be interested in supporting Gong and French’s vision.

Near-total disinterest from national-level socialist elected officials is reason enough to question the viability of French and Gong’s proposal. Indeed, Gong and French don’t seem to consider the possibility that if Bernie, the Squad, progressive unions, and others thought that increasing their political leverage were as simple as joining together left forces, they would have already done so. The fact that they haven’t may suggest a massive strategic blunder on their part or it may indicate their belief that the organizational, social, and financial bases needed to incorporate new working-class constituencies — rather than mobilize the existing activist base — simply aren’t there (at least not yet).

On the one hand, neophyte progressive activists looking for an organizing home can easily find one, from Progressive Democrats of America (PDA) to Our Revolution to Democratic Socialists of America (DSA). Model organizations for progressive organizations similar to that envisioned by Gong and French, such as the Richmond Progressive Alliance in California, tend not to be part of a national umbrella. Those that do are often members of the Center for Popular Democracy and People’s Action, which both backed Sanders in 2020. Put simply, there already are large-scale membership-based national formations similar to what Gong and French propose. Some are not democratic like DSA, whose members elected their own leadership, but many do have local autonomy.

On the other hand, ordinary people who fall outside the organized progressive bubble would be no more likely to join an outfit forged through a merger of these groups than they are to join any of them now. Many rank-and-file Bernie voters who have opted out of taking the plunge into extra-electoral political action would draw no distinction between Our Revolution and this new formation. Squad enthusiasts might ponder what a new group would offer that they could not already do as individual volunteers for the campaigns or nonprofits our comrades in Congress already promote.

Most important, workers disgusted with corporate greed and political corruption but who place little faith in progressive or socialist appeals to address these problems would be unmoved by more of the same organizing tactics — albeit consolidated into a single apparatus. Expanding the Left’s base into the broader working class will require much more than expanding the supply of left organizations: it will also mean creating (or waiting for) a massive growth in demand for what the Left has on offer.

Protests Make Their Own History, But Not as They Choose

Gong and French also overestimate the impact of outside agitation on centrist Democratic senators. They claim that a new, mass progressive organization “could have built a powerful movement to pressure Joe Manchin and Arizona senator Kyrsten Sinema” to support President Joe Biden’s Build Back Better program and “might also have pushed the Biden administration to use its bully pulpit or the power of executive action to enact sweeping change (like canceling student debt).” These claims, particularly the former, ignore political reality.

No amount of holding Manchin or Sinema’s feet to the fire could have swayed either to support Build Back Better. They likely would have relished such opposition, which could have allowed them to burnish their credentials among right-leaning West Virginia and Arizona voters (and big campaign donors) as America’s last line of defense against the Left. While we are firm believers in the power of mass protest to alter politicians’ incentives and create more favorable conditions for progressive reform, the political potency of protest is itself shaped by the leverage protesters have over politicians. And unfortunately, in the case of Manchin and Sinema, the Left was largely up a creek without a paddle.

More generally, French and Gong underestimate the extent to which progressive agitation can overcome Democratic Congressional leaders’ strategic incentives to focus their electoral strategies around competitive (and ideologically moderate) electoral districts rather than their activist base — particularly in a midterm political climate that strongly favors Republicans. Since Democratic voters are concentrated in urban congressional districts, to win control of Congress they must prevail in many districts made up largely of moderate and conservative voters. This means that, especially in close races, they simply cannot afford to tack too far to the left on many issues and that their responsiveness to activists’ demands will be limited. It is unclear how any amount of protest — short of massive disruptions of daily life through strikes and related actions, which themselves would require social conditions that currently don’t exist — could have changed this basic calculus.

We have no doubt that better coordination among left organizations could increase our overall impact, leading to more focused and better-resourced state legislative campaigns and potentially a measurable increase in the prevalence and success rate of unionization drives. But before that can happen, socialists need to be at the table.

DSA was the only member of the national People Power for Bernie coalition in 2020 to not stay on with these allies — including those, like DSA, who did not endorse Biden that year — for a new formation called United Against Trump. There are real-world consequences for these decisions. Specifically, the Squad and Sanders — who strongly supported Biden — did not see DSA active in any fight to defeat Donald Trump — and this undermined DSA’s credibility with the very people that Gong and French now seek to influence.

More broadly, though, we should recognize that most of the gains that could be achieved through improved coordination — however meaningful — would be on the margins. There is only so much that rethinking our strategy can accomplish in the face of overwhelming headwinds. Most of what lies ahead for the Left is largely out of our control and depends on fortuitous political, economic, and social developments that open up new strategic possibilities.

That said, there are things we can be doing now to tilt the playing field in our favor. Doing justice to this question is well beyond the scope of our ambition here, but we’ll offer two brief comments.

First, progressives and socialists can work to fashion the durable Democratic governing coalitions we need not only to pass basically anything on the Left’s wish list but also to head off a further deterioration of US democracy. In the process, we can increase the size of the Left’s voting bloc in the Democratic Congressional Caucus, allowing us to keep our agenda on the table as we build the political coalition required to make it a reality. But all this demands continued and expanded experimentation with progressive electoral strategies that can be effective outside Democratic strongholds. It means reaching voters who may be skeptical of Democrats but who might be swayed by candidates who pair Bernie’s anti-elite messaging with a focus on bread-and-butter issues.

Second, we can help strengthen and expand the existing mass organizations — primarily, but not exclusively, unions — that are capable of organizing disillusioned workers who are currently sitting on the political sidelines. This means supporting union drives where possible, electing Democrats to stop Republicans from taking over the National Labor Relations Board, and building upon work done by groups who use union-style organizing tactics to reach working people year-round outside of traditional unions.

In sum, we’re not against calls to consolidate the existing Left into larger and more effective organizations. We just don’t see it as a fruitful effort, until 1) the political conditions shift enough to allow progressive reforms to succeed (which requires more creative electoral organizing outside of Democratic strongholds), and 2) a mass working-class base exists to support those organizations (which requires new strategies for reaching people outside the ranks of highly engaged activists, who comprise the lion’s share of the progressive base). We see the path forward (if indeed there is one in the short to medium term) as first rebuilding labor, civic engagement, and securing durable Democratic majorities. Still, we see great value in bold challenges like that of Gong and French, as they help clarify the strategic stakes we face and think through possible solutions more clearly.