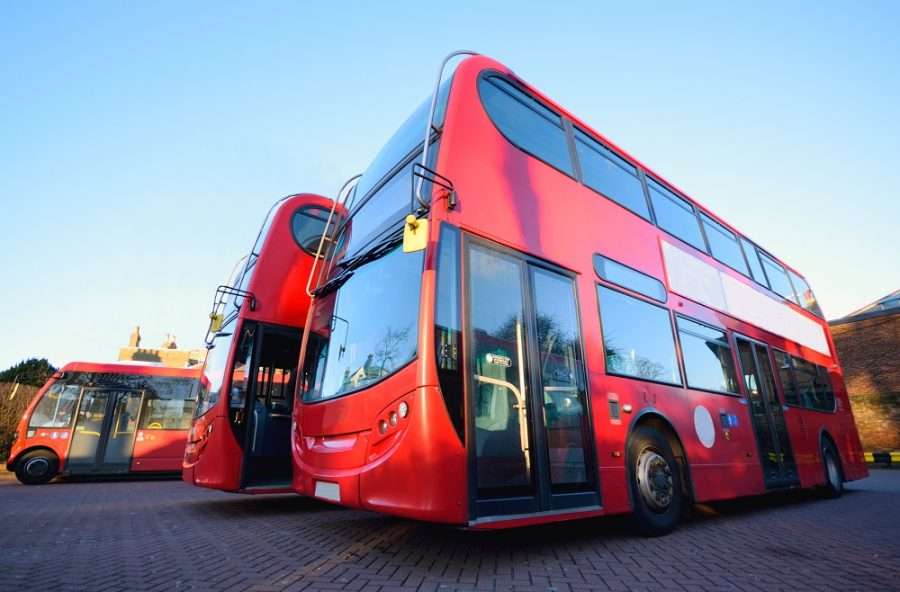 London bus drivers were some of the worst hit by the pandemic, and as thanks, many are now being slapped with a real-terms pay cut – so alongside tube and train staff, 1,600 are striking this weekend to demand something better.

The lack of care afforded to those who keep London moving was thrown into painful focus by Covid. (savoilic / Getty Images)

‘Everything is very, very expensive at the moment,’ sighs Sarah*. ‘And at the end of the day, we drivers are the ones getting people from A to B, getting the abuse. But we don’t have the backing, the appreciation, the respect.’

For five years, Sarah has driven a bus in West London. Along with 1,600 of her colleagues and fellow members of Unite the union, she’s striking today against the pay offer made by the company that employs her, London United—a measly 3.6 percent this year, and 4.2 percent next year, against inflation already in the double digits and expected to go higher.

Transport workers like her, some of the best organised in the country, have been at the forefront of 2022’s summer strike wave. This weekend marks one of the biggest moments of that wave so far: not only London United, but workers on the Underground, the Overground, and the train networks are taking action for better pay, for better conditions, against job cuts, against funding cuts, and against the general havoc that has been wrought on the country’s public transport systems in the last decade of Tory austerity. Drivers at depots in Fulwell, Hounslow, Hounslow Heath, Park Royal, Shepherd’s Bush, Stamford Brook, and Tolworth are out today and tomorrow.

For London United workers, pay is the issue at hand. But London’s bus drivers have also seen some of the worst consequences of cuts to networks and workers’ conditions in recent years, a process that goes back much further than the cost of living crisis. ‘I started driving a bus in 1995, and I’ve seen the industry going downhill,’ says Dan*, another driver standing alongside Sarah on one of the garage picket lines early Friday morning. ‘A lot of people are talking about a shortage of drivers in the bus industry. If you look around London at the moment, every garage is short.’

For Dan, that’s not particularly surprising: while the exit from the European Union has left bus driver numbers depleted, it’s also a result of the assaults on pay and conditions that have taken place in recent years, and not just at his garage, but in the industry as a whole.

‘We’ve lost our unsociable hours, we’ve lost weekends, the overtime rates have gone down, our working conditions have been badly affected,’ he says. ‘It all comes down to profit, and enough is enough.’ Some drivers, he adds, are now working sixty- or seventy-hour weeks just to make ends meet. ‘The cost of living’s gone up, food prices have gone up, and as a driver you’ve got to be able to afford to be in the job.’

The lack of care afforded to those who keep London moving was thrown into painful focus by Covid, with reports from 2021 showing London’s bus drivers were three times more likely to die from the disease than those in other occupations. In total, the city lost a devastating seventy-five drivers, including individuals from Dan and Sarah’s garage. One had helped train Dan when he began the job.

‘There was no support for us,’ Dan continues, when asked about that period. ‘There were no toilet facilities—a lot of the toilets were closed—and we didn’t have anywhere to eat, because there’s no canteen at the garage.’ The result, inevitably, was drivers often doing twelve-hour shifts on full bladders and empty stomachs, with nowhere to spend their breaks. For a twelve-hour shift, Sarah adds, drivers get an hour—forty or forty-five minutes paid, fifteen or twenty not.

In the pandemic’s wake, these kinds of basic infrastructural issues have not been solved. During the recent heatwave, for example, Dan says that lack of air conditioning meant the temperatures of some cabs were reaching into the mid-forties, which drivers had to suffer with nothing but a warm bottle of water to sustain them.

And the problems drivers face on shift have been compounded by money-saving cuts to the bus network as a whole—cuts that Unite is currently attempting to prevent from getting any deeper, as TfL threatens to cut sixteen routes— driven by a government-created funding crisis, which mean those who rely on regular buses to get around are frustrated. When there’s anger, it’s the drivers, not the bosses, who face the brunt.

‘We get daily abuse because the services have been cut so much,’ says Dan. ‘My service used to run every two minutes, went down to three minutes, and now it’s six or seven minutes. In the mornings, it’s a ten-minute gap; if there’s one bus missing, that’s a twenty-minute gap.’ In a normal shift, he adds, he expects to be verbally abused between two and four times.

With the knowledge of these conditions—long hours, lack of amenities, abuse and discomfort—not subjecting staff to a real-terms pay cut seems the bare minimum transport companies can do. That’s as true of London United as any other: London United is a subsidiary of Régie autonome des transports parisien (RATP), the state-owned French public transport company, which, according to Unite, made £174 million in profit last year.

While companies post nine- and ten-figure sums, more workers are bracing themselves for a winter made freezing by £4,000 energy bills. Conversations about the nationalisation of the energy sector have rightly been everywhere during our current financial and ecological crises; alongside that solution comes the need for high-quality public transport that can discourage car use and ensure those with stretched incomes can get around cheaply and easily.

Termed ‘key’ already, then, the workers striking this weekend are going to be crucial to building any kind of secure and sustainable future, and it seems time they were treated and paid like it. That they’re ready to fight is the first step—and ready they are. As Sarah puts it: ‘We’ll carry on striking until we get what we want—and deserve.’

*Names have been changed to protect interviewees.