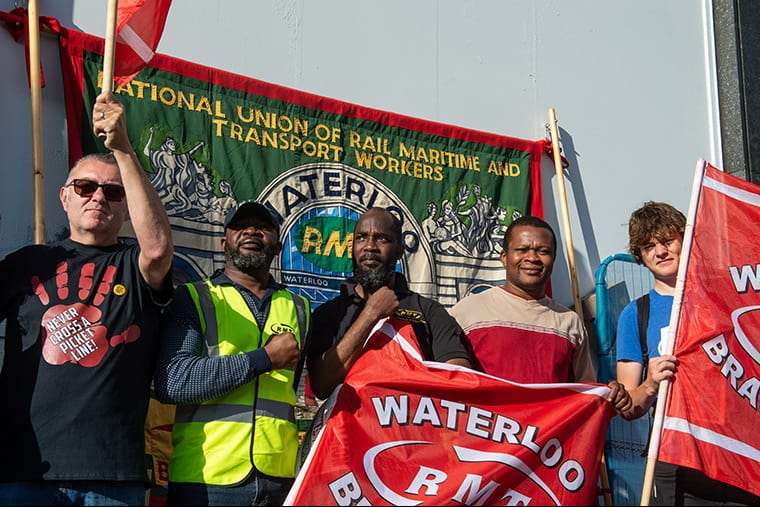 As over 40,000 rail workers struck again on Saturday, the Tories stepped up their warnings of a brutal class assault.

Tory transport minister Grant Shapps wrote in the Daily Mail, “Margaret Thatcher knew Luddite trade unions were a barrier. She delivered prosperity by taking them on—and so will we.”

He paid out 16 anti-union measures such as “minimum service levels during strike action” and “strike ballots to be conducted more often”.

Others included doubling the notice period for strikes to four weeks, restrictions on picketing near “critical infrastructure”, a new “inflammatory language” measure to be used against pickets, an “online intimidation” basis for internet censorship, imposing legal limits on picket numbers and taxing strike pay.

It’s a threat to every union and to every worker who wants to defend their pay, job and conditions. At a time of deep crisis, it is preparation for accelerated class war.

Andy, a Network Rail worker from east London, said from the picket line on Saturday, “We will resist any anti-democratic attacks. What the Tories overlook is that we are building a movement, if they come for the RMT they have to come for Unite, Unison and the rest.”

That’s a good message. But far too often union leaders have allowed strikers to be isolated and anti-union measures to by taking them on—and so will we. It doesn’t have to be like that. And the support for strikes now shows the potential.

Andy said, “Support has been constant, you usually see it drop off by this point, but not this time. It’s good for us to see that, it shows working class strength.”

Andy, like many of his colleagues, wants to see a more sustained plan of action announced by the rail unions. “I see it from both sides,” he said, “Some people are really struggling—Grant Shapps keeps banging on about £44,000 wages, I don’t get paid that.

“But if we don’t fight back, we will get done over again and again.”

Saturday’s strikes saw action by members of the RMT and TSSA unions employed by Network Rail and 14 train operating companies. They were joined by 1,800 bus workers employed by London United in west London.

This is having a huge impact on the capital with buses from other firms that are running reaching capacity. And the London Overground and Underground network ran a disrupted service as it recovered from Friday’s strike.

At present the union leaders have announced no further rail strikes. That’s a problem because under the present anti-union laws unions have to give two weeks’ notice of a walkout. With nothing timetabled it means the network recovers and the bosses don’t feel the pressure again.

And if the rail workers are to join, for example, 115,000 postal workers striking on 8 and 9 September, they would have to give notice by the end of this coming week.

There is huge solidarity with the strikes, shown by continuing support on picket lines across Britain.

One activist from the French rail union CGT, joined the picket line in Manchester. He told Socialist Worker, “The attacks workers are facing in Britain are the exact same to what we are facing in France.

“Very high cost of living, high prices, the fact our wages aren’t keeping up with inflation and massive attacks on our terms and conditions. We find it important to link up, build international solidarity and use their fight to strengthen ours.”

Sandra, an RMT member based at Waterloo Station told Socialist Worker, “If we come together collectively it will make an impact and would make the bosses listen to us.

“Individual unions need to bring the question of collective action to the table, individual strikes don’t have enough of an impact.”

TSSA member Dave said, “Industrial action is necessary to fight for rail safety, jobs and fair pay. Every worker who is seeing their livelihoods undermined will be watching the result of the rail dispute and will be encouraged if we win.

“To win we need the maximum level of solidarity.”

What’s at stake for rail workers?

One RMT union activist has shared with Socialist Worker a detailed list of the attacks that bosses want. They include

Precise plans out in October to shut all ticket offices
All station staff to be placed on multi-functional contracts, that is to cover different roles on different days with inevitable job losses and speed-ups
On board train managers, conductors, catering to be merged into one grade called a Multi Skilled Operative with the safety-critical element of jobs being eroded
Sundays to be brought into a normal part of the working week
Any workers not agreeing to a new role can volunteer to be made redundant.
New staff to be employed on new contracts with inferior levels of pay and conditions.
These proposals would lead to a £2 billion a year cut in the railway budget
Train operating companies want to implement a pay review body that will not include union input, to decide future yearly pay rises, possibly with statutory backing

The scale of the attacks underlines why these strikes have to be fought hard and won.