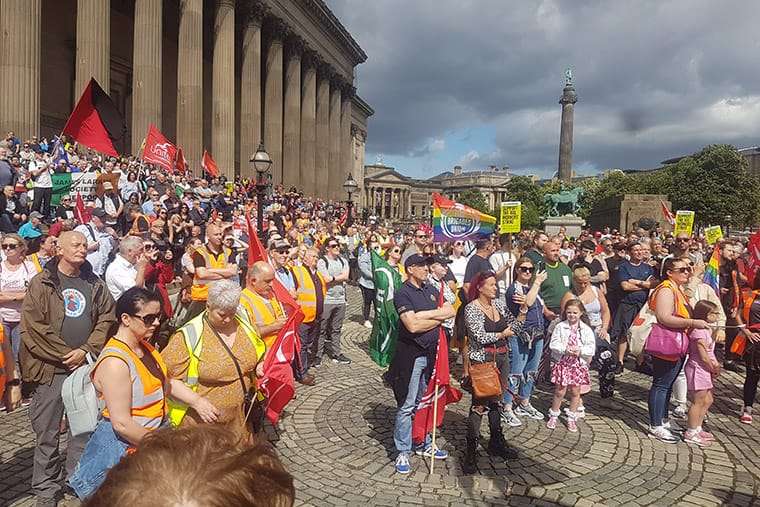 Chants of “Enough is Enough” rang through the streets of Liverpool on Saturday as nearly 1,000 people joined a march and rally in support of striking RMT union members. Unions present included PCS strikers, Unite, FBU, Unison, CWU, UCU and many other from across Merseyside.

As the march wound its way through the streets, many bystanders stopped to clap.

At one point a large number of people came out of a local pub to start of a chant of “Fuck the Tories”.

The march and rally was angry and defiant. Speaker after speaker at the rally talked about how we need to organise and fight back against the cost of living crisis.

Jane Loftus, vice-president of the CWU said, “We are in a class war. We have no representation in Parliament. We have to fight for ourselves.”

The crowd in Sheffield on the rail strike march (Picture: Sheffield SWP)

Sheffield: Hundreds joined a rally and march on the RMT picket line at Sheffield railway station today, Saturday. It was called by the RMT and trades councils across South Yorkshire.

Banners included four trades councils, the Unison, Napo, PCS, NUJ and Unite unions, the Orgreave Truth and Justice campaigns, and Stand Up to Racism. CWU union members in Royal Mail and BT spoke about their strikes.

Gaz Jackson, regional RMT organiser for Yorkshire and Lincolnshire, thought 300-400 had taken part: “It’s absolutely fantastic. We’ve been on the march through the city of Sheffield and the number of people that are in support of us is absolutely outstanding.

“What I would say is, we need support, we need support through the winter, we need solidarity, not your sympathy. We need the people to get behind these strikes because if it happens to us, it’s coming to you as well.”

He said they would take the rail strike as far as they need to, including re-balloting in November.

There were over 100 people on a rail strike solidarity march in Portsmouth and around 60 on a rally in Cardiff.

Check back later for further march and rally reports

Workers and passengers marched together in London on Saturday against bus cuts (Picture: Socialist Worker)

An angry protest through central London demanded the survival of London buses as Transport for London plan to axe 250 buses and 16 routes.

The protest by 70 activists blocked one direction of traffic as they marched the 24 bus route—that’s one of the services facing the chop.

Bus drivers in the Unite union led and organised the protest and received cheers from all the passing buses. They were joined by local trades councils, Extinction Rebellion, and NEU union and Labour Party members.

People waiting at bus stops joined in with chants of, “Cut their profits, not our buses”, and “Save our buses.”

One passenger who joined the protest told Socialist Worker, “Buses are already unaffordable. Now these cuts will make everything worse.

“We can’t afford to use taxis as an alternative. Transport for London does not understand the damage this will do to people’s lives.”

This was the third protest in London in three weeks to save bus routes and jobs. And it took place as London United drivers struck for a second day alongside the rail strike.

Protesters raise concerns that prices will rise and cutting public transport will have an awful effect on the environment.