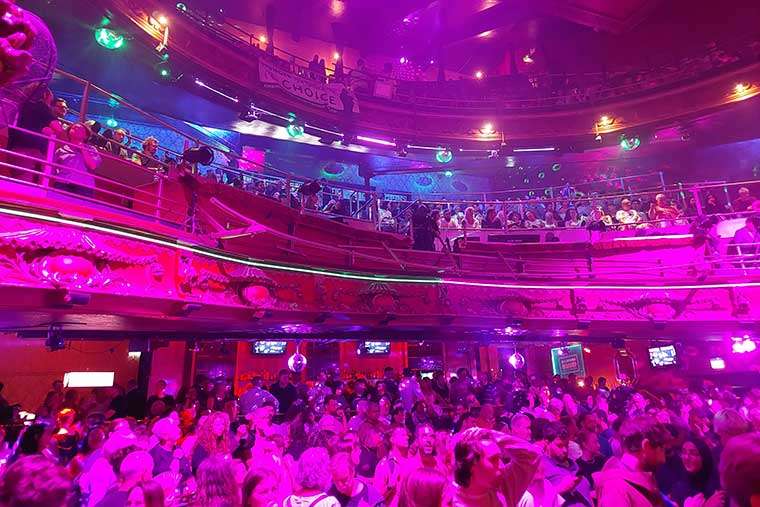 The energetic support for the launch of the Enough is Enough campaign showed a renewed hope for fightback in Britain. Over 1,500 people turned out to the rally in Clapham, south London last Wednesday with hundreds turned away after the venue reached capacity. Trade union leaders Jo Grady from the UCU, Dave Ward from the CWU and Mick Lynch from the RMT addressed the crowd, as well as Labour MP Zarah Sultana.

Under the slogan “It’s time to turn anger into action”, speakers stressed the need to hit back against the Tories and the spiraling cost of living crisis. The rally demanded real pay rises, ­nationalisation to combat soaring energy bills, an end to the need for food banks and skyrocketing rents, and a policy of taxing the rich.

The atmosphere echoed those of Jeremy Corbyn’s rallies in 2015 and 2017. But this time the focus was on workers in struggle. The predominantly young crowd showed strong support for the rail, tube, bus and postal strikes, with Lynch urging “a summer of solidarity”. The size of the turnout shows a hunger for change, and to do ­something now about growing poverty and falling wages.

Enough is Enough is an important moment to rally big numbers of people who feel lifted by the strikes and want to hit back effectively at the Tories. Ward said the task is “about building collectivism”. “We want to start using the platform of industrial disputes and ordinary people coming out to start having conversations,” he explained.

“There’s been lots of campaigns over the years going nowhere. We’re going to deliver change—make no mistake about it.”

Anger also rang out against Labour and Keir Starmer. “It’s good we’re ­standing up for members’ terms and conditions,” Ward added. “But we’re also standing up for those outside work and the whole of society being ripped off. People say where is Labour? It’s up to Labour—this campaign goes on with or without it,” Ward said to huge roars of approval. Though he added some Labour politicians “deserve our support”. And Lynch said it was still in workers’ ­interests to elect a Labour ­government.

Enough is Enough plans to launch more branches, collective actions and rallies across Britain. It promises to organise visits to picket lines, and action against energy companies, with ­supporters grouped into four regional branches—north, south, east and west. Organisers plan several more ­rallies in towns and cities across Britain. Although how branches will be organised, and the role of supporters in this, is yet to be seen.

Ward said, “There’s no point in running campaigns like this by big committees because nothing ever gets done.” He added, “You can add to the ideas that we’re bringing forward. We want to give a platform to people who can talk about solutions, not just us but other organisations. We’re also going to be making sure that you’ve got a role in it. Give us a few weeks to make sure that we get that right.” Ward said the point of Enough is Enough was to connect trade union activity with campaigns outside the workplace. And, he said, “We’re also going to be announcing forms of collective action that we can take across the UK whether you’re in a union or not.”

Grady said, “solutions don’t lie in Westminster. We have to fight back united as a class.” She added that “demands have to be rooted outside the workplace. Wining industrial disputes isn’t going to solve the problem that energy is unaffordable or that the planet is burning.”

And Lynch said, “The rail dispute was industrial—it’s become political because of the mood of the country and tactics of the government. We will fight for as long as it takes and stand shoulder to shoulder with every other strike, union and community to fight back against this austerity.” He added, “Unions must lead, we can’t wait for the politicians. We need to get out into the communities and the former red wall to assist them to campaign.”

There is an underlying tension—will the campaign focus on complementing and extending the strikes that have the power to beat the bosses and the Tories’ hard, or will it become an alternative? Ward, Lynch and Grady didn’t ­mention plans to coordinate or escalate strikes. But the launch was ­uplifting—and shows there’s an opportunity to spread confidence, establish networks and build a powerful movement of resistance.

A young crowd looking for ideas

One of the most striking aspects of the Enough is Enough launch was the range of people who came to the rally. They weren’t the usual faces of experienced left activists, or even necessarily established and seasoned trade union activists. The crowd was noticeably young. And many of the people had come after seeing the event advertised on social media rather than through trade unions or left wing groups’ mailing lists.

All of them had come in search of an answer to rising prices and years of Tory government.

Zarah, who works for the NHS, told Socialist Worker, “I heard about this on Twitter. Everybody has had enough. Everything is so expensive, it’s a struggle. It doesn’t matter if you work or not, you’re still in the same situation. I see people having to choose between electricity or putting food on the table. I went to a programme helping refugees and there was a woman there who didn’t have food in her house.

“She moved to a shelter, moved to a housing association. She got the key for the gas and electricity but she didn’t have money for shopping. Universal Credit said to her, you have to wait six weeks until you get your payment. How does someone like that survive? I came here to see if other people feel this way and I’m glad this has happened. We see other people just suffering.”

And Petrea, a student, said, “I’ve just been getting involved in politics as a student and I saw this on Twitter. “I come from a working class background. Seeing the things my parents went through to raise me and other people in my life going through the same thing—as the event says, enough is enough.”

Time and again, people at the rally also said they’d come because of what they’d heard from RMT general secretary Mick Lynch in radio and television interviews. They said they hadn’t heard such arguments—about class, and organisation—from anyone in the mainstream.

Tom was one of them. “I heard Mick Lynch initially on the strikes. But he also began to talk more generally about the cost of living crisis, housing and food poverty. It was the first time I’d really heard anyone talk about class politics or class issues in a direct way, ever in my life.”

For many, Enough is Enough appealed to them explicitly as an alternative to the Labour Party. They are either disgusted by Keir Starmer’s leadership, demoralised by the defeat of Corbyn’s, or both. Paul, a bricklayer from north London, told Socialist Worker, “I’m a member of the Labour Party. I’d given up on politics in the last year but I heard about this event and thought I’d better come along. We’ve had five years of hope dashed in the last couple of years.

“But we’re not going to give up and walk away are we? We saw the promised land a couple of years ago. We’re not just going to settle for sitting and watching Netflix boxsets. We’ve been kicked all over the place and finally someone is standing up and saying enough is enough. There was a massive current line running through the country in 2017 and it can’t just dissipate can it?”

And Anne, who works in the civil service, said, “Labour is missing in action. A lot of people who had hope in Jeremy Corbyn and his manifesto are still a huge section of the Labour Party but they’re also missing, so they need someone or something to rally behind.”

Both the rejection of Labour and the enthusiasm for Enough is Enough’s message reflected how the recent strikes have changed the political terrain. Everyone at the launch rally was excited about the possibility that a new movement could come out of it. But most were still very open to what that movement would be—they were only sure that they wanted to be involved.

“I thought this was great—I thought it was uplifting,” Jay told Socialist Worker. “It was what I needed to hear.” She added, “It’s made me feel like there’s stuff that I can get involved in. I think people should get involved in all this, and do everything the speakers here said, finding people who are striking and supporting them.”

For a few, the answer lies partly in an electoral alternative to Labour. “I hope we see a mass movement up and down the country,” said Paul. “What do we need to do? I don’t want to say form a new party—but, form a new party.” But for most it was building some form of action. Ed, a CWU rep, hoped it would strengthen trade union campaigning. “I hope this will be the opportunity for other trade unions to join in and do the same—and to see more unity between the trade unions, supporting each other,” he said.

And Tom said, “It’s the first time there seems to be any kind of unity between unions. The junior doctors a few years ago were out on their own for ages and then nothing ever seemed to come of it. There have been these isolated battles, but they seem to be gathering momentum across different unions and organisations.”

Everybody supported the strikes, even though some saw them as a “last resort.” “If people aren’t listening then the last resort is strike action,” Fahey, a Kill the Bill activist, told Socialist Worker. “I’m very supportive of industrial action. I don’t think anyone can be against it. It’s a hard decision to strike—if you’re made to then you have every right to do so.”

Others said they hoped there would be more strikes. “Striking is such a powerful tool,” said Anne. “It needs to be shown to be effective—a few wins and you’ll be able to prove that to other sectors, such as the aviation industry or civil servants. It creates a domino effect.” The underlying sense among everyone there was that trade unions—whether through strikes or organising Enough is Enough—were driving the alternative.

“After Corbyn a lot of people are looking for something,” said Kell. “It’s about time the unions came back and it looks like they will. The working class is inherently strong, and the unions galvanise and solidify that strength.”

Perhaps most importantly, many people also hoped that the campaign would develop into a much bigger movement for change. “We can relearn the way people can organise. And we set aside things that divide us and unite on core issues like being able to afford to house family, being able to afford food,” said Tom. “I’m personally hoping that there will be some creative thinking or ideas that kind create long term solutions as well as deal with the short term cost of living crisis. Really, what this is doing is picking a scab on quite a deep wound in the working class.”

“I would like solutions that someone can act in their communities and take away,” said Anne. “That could be organising a series of rallies creating a movement. Something like this can be a flashpoint and then ebb away. Creating a movement doesn’t happen overnight so we need action to get involved in.”