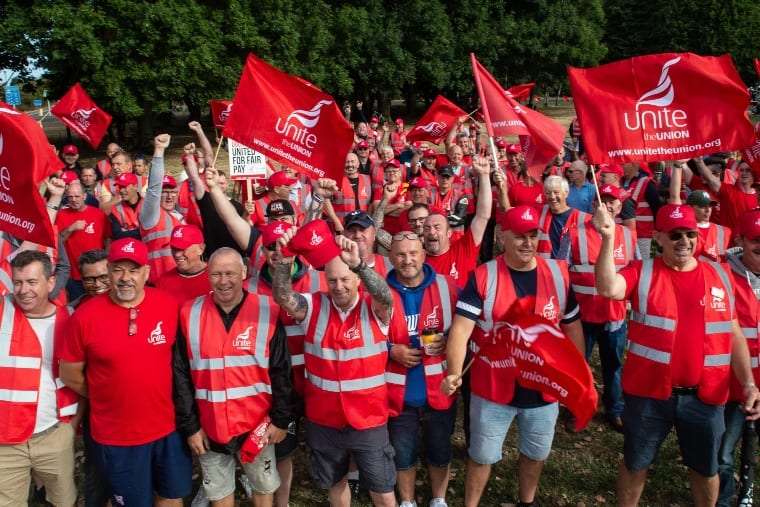 Over 1,900 confident workers began their first of eight days of strikes at Felixstowe docks on Sunday.

Unite union shop steward Phil told Socialist Worker, “We have no alternative but to take action. The pay claim we submitted is very affordable when you consider the 1.38 percent rise we achieved last year. And the accounts over the last two years show an operating profit in the region of £250 million.”

Negotiations have been taking place since January after the shop stewards’ committee submitted a pay claim in December.

Bosses made an initial offer of 5 percent, followed by 7 percent plus a £500 lump sum. This was changed the night before the strike to 7.5 percent, but with the £500 taken away—roughly £200 less than originally offered.

On the first day of action, hundreds of strikers on two picket lines showed spirits were high. Strikers include crane drivers, machine operators and stevedores that handle some four million containers a year from 2,000 ships.

The Felixstowe Dock and Railway Company runs the dock. But its dividends are paid into a complicated company structure and are principally received by the ultimate holding company CK Hutchison Holdings Ltd.

CEO Clemence Cheng went to the picket line to plead with strikers. “That failed miserably,” John, a local trade unionist and worker reported to Socialist Worker. “They heckled him. They’re trying to say ‘we’re in charge’—but they’re clearly not.”

“The mood was fantastic,” local activist Hugh told Socialist Worker. “When the boss came over with more management the crowd around him saw through all his lies. The workers have lost faith in the management. One striker said he used to enjoy coming to work but not now.

“The boss turned round and said, ‘You don’t have to stay, you can leave’. They showed their true colours on the first day.”

Currently, the reps are calling for 10 percent—but with inflation soaring, and talks to start in October for the next pay year, strikers could be calling for much higher.

The pandemic was a central part of the dockers’ anger. Strikers had described a “divide and rule” in the workplace. New dockers were told not to talk to older dockers and were given separate canteens. But the 92 percent vote in favour of strikes shows the workforce is clearly united.

Cranes are currently in the air inactive, with just one ship sitting in the dock. Ships will now turn away from Felixstowe, but some are too big to be unloaded anywhere nearby.

Just 21 scabs went into work on the first day of the strike—far less than the 500 needed to keep the dock running. This puts the workers in a very powerful position and the company is losing some £1.5 million a day from the docks being shut.

Bosses have told workers that the ships moving elsewhere will be bad for their trade. But some other docks in the US and Europe have announced their refusal to handle any goods diverted from Felixstowe.

With strikes also set to go ahead at Liverpool docks, strikers in Felixstowe should call for flying pickets at other docks or travel to other workers’ pickets to build solidarity.

It’s fantastic that eight days of action were called—this will paralyse the docks. But further escalation sparked by the rank and file could unite dockers, and other strikers, across the country.

One striker’s mother is a nurse and stepdad is a postal worker. “Everybody is getting screwed over,” they said. “We need to unite these struggles, one picket to another.”

John said the solidarity on the picket line was “well received”. “This is an exciting time and the mood is good—get down to the picket lines to show support