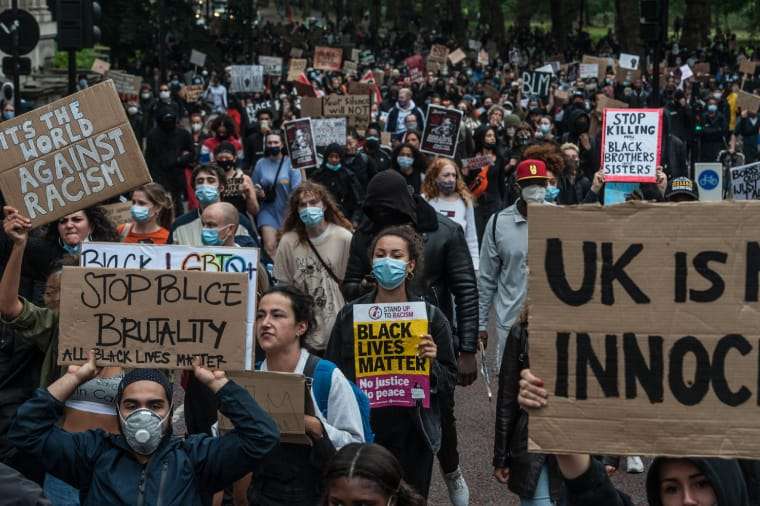 Strikes and movements such as Black Lives Matter have had more impact than politicians (Picture: Guy Smallman)

Perhaps revolutionary parties fitted a century ago. Are they still needed?

There are going to be massive movements fighting for change across the globe in the coming months and years. But will they win, and what does it mean to win? Without conscious political organisation, even big movements can be defeated or blunted. We face a ruthless ruling class that will use economic pressure, repression and even military violence to preserve their system and privilege.

We also have to be organised. Look at the heroic movements for change that have taken place very recently in Sudan, Sri Lanka and Myanmar. There has been no shortage of courage or determination. In Sudan protesters have taken to the streets again and again for over a year despite murders by the state, torture and jailings.

In every major crisis that raises the question of revolution, there are three groups. One seeks to halt all change and defend the existing set-up. A second group wants to see reform but not to overturn the whole of economic and political life.

Then there are revolutionaries who try not just to remove a particular leader or government but to take the factories and offices, the wealth and resources from the bosses. They fight for workers in vast numbers to break the capitalist state and set up a much more democratic system. As Karl Marx put it, “The emancipation of the working class must be conquered by the working classes themselves.”

Nobody can do it for them—not an invading army or a band of bomb-throwers or trade union leaders or a parliamentary grouping. But if the revolutionaries are not big enough then right wing or reformist ideas can dominate among workers, and that leads to setbacks or bloody counter-revolution.

Workers and the poor removed the Egyptian dictator Hosni Mubarak in 2011 and threatened to bring social revolution. Unfortunately, there were not enough revolutionaries, and other forces came to dominate. That cleared the path for a vicious military coup and the present regime. Today the same political contest is played out in Sudan.

I am taking action as an individual and by participating in various campaigns. That’s enough for now.

It’s good to be part of campaigns. The SWP works in trade unions and a wide range of united movements alongside others for strike support, against racism, environmental destruction, imperialist war and much else. But all these are symptoms of capitalism, and we have to target that system.

We don’t just want to fight for better pay and conditions or against racism, climate chaos, women’s oppression and LGBT+ oppression. We want to combat them all and where they flow from. Sinking yourself into “mutual aid” or helping at food banks can help desperate individuals.

But it won’t change the world, as most people know. It can be an avoidance of the big problems that lie behind the need for such activities in the first place. Making movements effective requires organisation and strategies.

It means winning arguments against those who urge caution and want to put limits on our imaginations. That means people coming together in democratically decided and united activity—the creation of a political party. A revolutionary party is an organisation of leaders in workplaces and housing estates and campaigns.

It is not a loose electoral coalition that splits over key issues, but a party of fighters. A revolutionary party does not seek to reflect all the different views in society or even in the working class. It brings together the people who want to stick to their principles and defend socialist policies, whatever the pressure.

That doesn’t mean being remote from struggle. Revolutionaries have to be engaged in every sphere of resistance. But they must also bring arguments for socialism and a vision for how to achieve it.

We don’t tolerate racists, sexists or strikebreakers in the SWP. In Labour it’s a crime to denounce Israel—in the SWP it’s essential to support Palestinian rights.

You say you want a party focused on struggle. What does that mean?

Revolutionaries put battles at work and on the streets before parliament and elections. British trade unions became mass organisations as a result of the inspiration from the Matchwomen’s strike and the dockers’ strike in the 1880s, not the Labour Party.

Workers’ militancy during and after the First World War was sparked by activists who were already tiring of parliamentary reform and looked to the 1917 Russian Revolution. Fascist Oswald Mosley was defeated by the actions of revolutionaries and radical Jewish organisations, not Labour.

Labour was marginal to the mass strikes of the early 1970s—and the target of strikes at the end of the decade. Labour leaders spurned the miners’ strike of 1984-5. The great anti-war movement from 2001 was directed against Labour prime minister Tony Blair’s lies and blood pacts with the US.

The actions of ordinary people are the source of the most important changes in society. The Black Lives Matter protests did more to highlight systematic racism and win reforms than any number of election campaigns. The school students’ strikes, Extinction Rebellion and the mobilisations at Cop26 put climate chaos centre stage far more than all the elite and politicians’ conferences.

It is strikes and mass and militant protests that offer hope. Sometimes revolutionaries stand in elections. But what matters is which form of action dominates and disciplines the other. That’s why the great Polish-German revolutionary Rosa Luxemburg wrote in 1900, “People who pronounce themselves in favour of the method of legislative reform in place and in contradistinction to the conquest of political power and social revolution, do not really choose a more tranquil, calmer and slower road to the same goal, but a different goal.

“Instead of taking a stand for the establishment of a new society they take a stand for surface modifications of the old society.” That’s why the SWP focuses on organising the battles from the base of society.

But we don’t avoid politics even when the struggle is at its height. It’s crucial to take up issues such as sexism, racism and homophobia because oppression divides the working class. Rotten ideas divide workers, not arguing against those ideas.

Sometimes taking up such arguments can be uncomfortable— it’s always easier to pretend you didn’t hear some backward remark. Part of the strength of being in a revolutionary party is that it gives you the arguments to win over other people. It asks every member to be the champion of all the oppressed and exploited.

You are too small to make a difference.

It’s true the SWP is a few thousand people up against the state, the bosses and global capitalism. That’s quite a task. But revolutionary parties will always be relatively small when there is a generally low level of struggle. And they can grow quickly when strikes and mass movements take off.

That’s not inevitable. In every new movement there are battles over tactics and strategy. The common sense of society often makes people move first to change inside the system as it exists.

They have to be won over through experience and argument—and organisation makes that possible. A few thousand of us can make a difference now. We can work with others to build an anti-racist organisation, supporting and encouraging workplace resistance, arguing against capitalism and agitating for a socialist society.

The far right and the fascists would be much bigger in Britain now if it were not for the work that the SWP has done in broader campaigns. Our activists in the unions have pushed for more struggles and solidarity. We need a party that can fight over immediate questions, but will also think always of the battle to change the whole of society through socialist revolution.