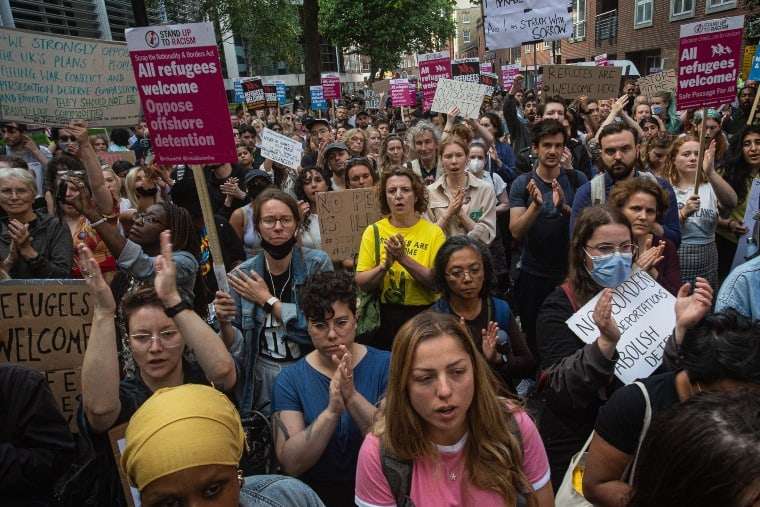 Protesting at the Home Office in June against the Rwanda deportations (Picture: Guy Smallman)

The Tories are defending their plans to ship refugees off to Rwanda, despite covering up major human rights concerns. This week a court granted the government permission to keep key internal documents about their deportation plans secret.

Charities, campaign groups and unions are challenging plans that will send refugees who arrive in Britain without documentation on a one-way ticket to the east African country. If their asylum application is granted, refugees have no route back to Britain.

The only attempted deportation flight to Rwanda so far has been unsuccessful following legal challenges and protests.

On 5 September a key court case will rule on the lawfulness of the scheme. The government wants to hide documents that reveal conditions for refugees in Rwanda.

The documents consist of an email from 26 April 2022 and the annotated draft of the government’s policy in Rwanda.

The Foreign Office said its comments on the draft and emails could not be shared due to public interest immunity and could harm international relations. Lord Justice Lewis ruled that four extracts could be withheld, as could specific words in others.

Some of the redacted words were already in the public domain. They have “evidential significance” to the challenge brought against the Home Office by charity Care4Calais and the PCS union.

Christopher Knight represents eight asylum seekers, PCS, Detention Action and Care4Calais who called for the documents to be made public. He said the Home Office has already provided “a significant array of evidence addressing the critical views advanced by the government about the government of Rwanda”.

One of the documents written by the unnamed official said torture and “even killings” are accepted in Rwanda.

And Britain’s high commissioner to Rwanda warned against the scheme because the nation “has been accused of recruiting refugees to conduct armed operations in neighbouring countries”.

Clare Moseley from Care4Calais said “the public has a right to know” these details. “Previously disclosed documents show the Foreign Office warned the government that refugees should not be sent to Rwanda due to its poor record on human rights,” she said.

“The Home Office must stop trying to pull the wool over the public’s eyes and just be straight with them. The Rwanda policy is brutal and inhumane, it will not work and the Home Office and its ministers know it.”

The Rwanda deal was announced by home secretary Priti Patel in April. Following the recent judgment, the Home Office peddled its lie that the policy is for good.

“Rwanda is a safe and secure country with a track record of supporting asylum seekers,” a government spokesperson said. “We remain committed to delivering this policy to break the business model of criminal gangs and save lives.”

The report details how Britain views other countries’ human rights. It was due in June before parliament’s summer recess.

Anti-racists are planning big mobilisations for 5 September when the next case is due to be heard in the Royal Courts of Justice in London.

The TUC union federation, Care4Calais and Stand Up To Racism have called a protest. It is backed by unions including PCS, Unison, Unite, NEU, GMB, CWU, FBU, NASUWT, ASLEF, UCU and BFAWU.

Every trade unionist and activist should build for the day to show that the Tories’ savage immigration policies are detested by ordinary people. And to make sure that not a single refugee is put on a flight to Rwanda.

Presence from 9am on Monday 5 September, rally 1pm-2pm outside the Royal Courts of Justice, Strand, London WC2A 2LL
For more information and activities outside of London go to Stand Up To Racism’s Facebook page or website