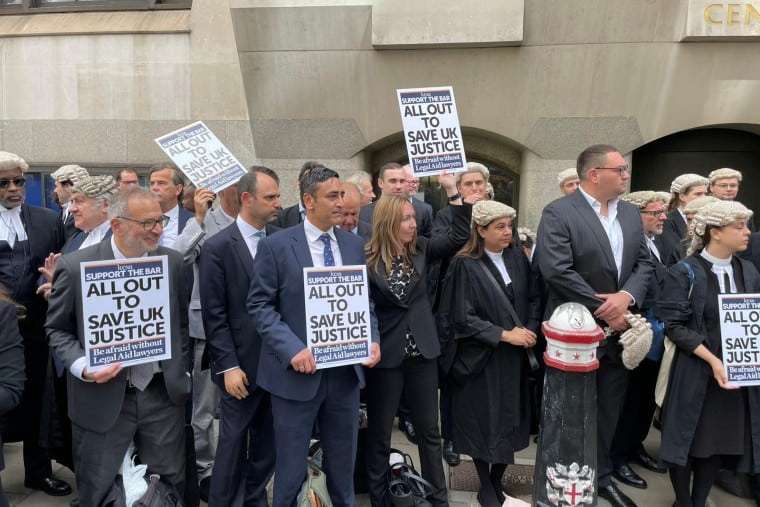 Criminal barristers in England and Wales have voted in favour of an all‑out strike next month in a clash with the government over jobs, pay and the defence of legal aid.

Members of the Criminal Bar Association (CBA), who have been stopping work on alternate weeks since June, voted for an uninterrupted strike that would start on 5 September.

The start would coincide with the announcement of the new Conservative party leader and prime minister.

The CBA said 79.5 percent of barristers who voted supported the move to an all-out and indefinite full-time strike over legal aid rates. The association says these had in effect been cut by 28 percent over the past decade.

The strike will see the vast majority of crown court trials in England and Wales being adjourned while others could collapse entirely.

“It is a decision to which we have been driven after years and years of abject neglect of the Criminal Justice System and the cynical exploitation of our time, effort and goodwill by successive governments determined to deliver justice on the cheap,” the CBA’s leadership said in a letter to members.

The CBA vice chair, Kirsty Brimelow, said, “It is a last-resort action.” Previously scheduled action means the last working day for many was set to be on Friday this week.

Scotland’s largest teachers’ union has said a revised 3.5 percent pay offer is “profoundly disappointing”, adding it is likely to ballot members on their willingness to take industrial action.

The EIS rejected a 2.2 percent pay offer in June, with the Scottish Negotiating Committee for Teachers putting in a 10 percent pay claim. EIS general secretary Andrea Bradley said, “The revised offer is profoundly disappointing and likely to be seen by our members as insulting.

“Teachers deserve to be paid fairly but are again being offered a deep real‑terms pay cut by their employers. With inflation still rising, it is simply unjust that teachers as essential public sector workers would be expected to bear the brunt of this.”

The union has called regional rallies in Glasgow on 5 September and Edinburgh on 7 September.

Crumbs not on at Jacobs cream cracker factory

Hundreds of workers at the Jacob’s factory in Aintree, Liverpool, could be set to strike. The company has offered just a 3 percent pay rise.

That led to a strike ballot with GMB union members  voting 88 percent for strike son an 82 percent turnout. No strike dates had been notified at the start of this week.

Last year workers at the plant struck for two days in a dispute over imposed changes to terms and conditions of employment. GMB members also expressed their anger over what they said was a management culture of disrespect and bullying.

Reach journalists at Express and Mirror set to stop

Journalists at newspapers published by Reach—including the Mirror, the Daily Express and several local papers and websites—were set to strike on Friday of this week.

The members of the NUJ union voted to strike after bosses offered them a pay increase of just 3 percent. Meanwhile, Reach chief executive Jim Mullen is paid 104 times more than the average Reach worker’s pay.

The strike means up to 1,093 workers could strike. It is set to be followed by another strike on Wednesday of next week, and a two day strike on 14 and 15 September. The NUJ has set up a hardship fund.

Meanwhile, journalists at the Scotsman, Scotland on Sunday and Edinburgh Evening news have called off a planned strike over job cuts. The NUJ union said it called the action off after two of the workers affected by redundancies said they didn’t want the strike to go ahead.

The members of the PCS union, working for outsourcer ISS, are fighting over health and safety and leave entitlements.

The workers, based in central London, also struck over health and safety last year, and were part of the successful all-out strike at Beis in 2019.

Outsourced security guards working at the courts and tribunals service have voted to accept a pay offer of “a minimum of 8.3 percent.

The workers—employed by outsourcer OCS—had been set to strike earlier in August.

But the PCS union suspended the strike after bosses made the offer. The new deal is an improvement and shows the threat of action had put pressure on bosses. But it is still a real-terms pay cut. More could have been won by striking.