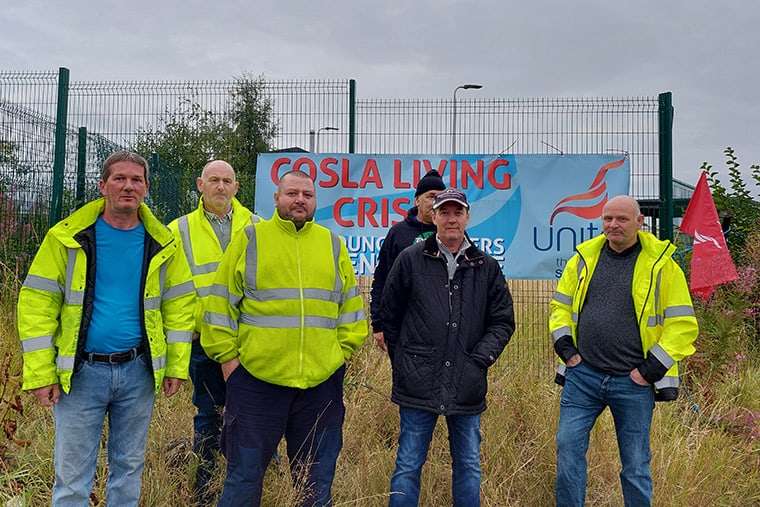 Hundreds of refuse workers in Edinburgh have launched an 11-day strike. Their action has led to ­rubbish clogging the streets and overflowing bins during the famous fringe and festivals in Scotland’s capital.

Big and enthusiastic picket lines show that workers are up for the fight and don’t want to back off without a real improvement. The action began on Thursday last week and ­continues until Tuesday next week.

It involves mainly Unite and GMB union members. Its roots are in a national pay offer from Cosla, the council employers’ body. Unite branch convenor Graeme Smith said, “Staff are feeling very angry about the pay offer. We were being offered 2 percent originally, which is an insult.

“Cosla then came back five months later and increased that to 3.5 percent. Again, not something we could even consider taking to the members during the cost of living crisis. So there’s a lot of anger. Members can’t put food on the table.

“Come winter, they’ll be choosing between heating and eating.”

Cosla has now upped its offer to 5 percent offer, but Edinburgh strikers aren’t impressed by that either. The strike hit hard with all bin and recycling collections suspended.

Street cleaning and the removal of waste from public litter bins has also been cancelled, with all ­recycling centres closed and fly‑tipping reports going unanswered.

Following a rally outside the city chambers, cleansing workers marched through the city centre to join the RMT picket line at Waverley station. This week and next week, with refuse, BT and Royal Mail strikes all scheduled, there is a real potential for united rallies.

The Edinburgh strike is set to be followed by a big wave of action by waste workers across Scotland. It is coordinated by the Unite, Unison and GMB unions.

Bin workers in Newham, east London, were set to strike from Saturday after a massive vote for action over pay. An extraordinary 99 percent of Unite union members who voted backed strikes on an 81 percent turnout.

The workers are paid far less than refuse workers in neighbouring Hackney and Greenwich. For example an operative in Newham earns £22,850 a year compared to £24,763 for a worker in Greenwich doing the same work.

Royal borough set to be full of rubbish

Bin workers in Windsor and Maidenhead are set to strike from Wednesday of next week.

The GMB union members work for the council’s waste contractor Serco. The present rate of pay for refuse loaders is £9.91 per hour and even with the 6 percent offer which has been rejected by members, still sits below the rates paid by neighbouring authorities.