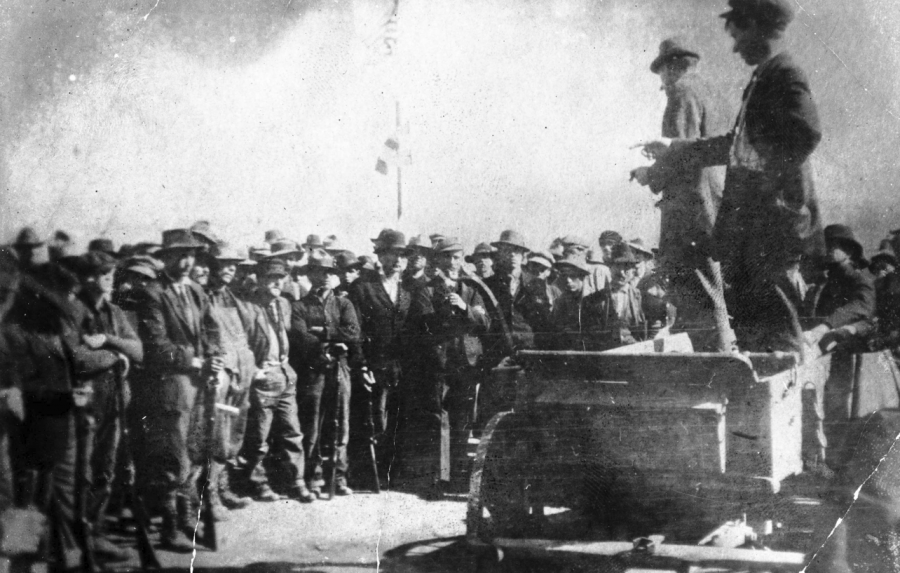 Eugene Debs was famous for excoriating the barbarities of capitalism, including the right-wing notion of the “unworthy poor.” As Debs writes in the following 1915 article, republished here for the first time, every human deserves to be free from poverty.

The warnings which have recently issued from both the pulpit and the press in [Terre Haute] against the “unworthy poor” prompt me to ask these Christian gentleman if the great Teacher they profess to follow ever made any discrimination between the “worthy” poor and the “unworthy” poor. The poor were the poor to him, because he was of their number. Born in direst poverty, he knew their suffering and heartache, and when he ministered to their wants it did not occur to him to smell their breath to see if they, or possibly their grandsires, had not in some evil hour taken a drink of liquor as an excuse for branding them as “unworthy poor,” and turning them away to starve. Indeed, so completely and consistently did he love the poor, from whom he sprang and among whom he spent all the days of his sad and tragic life, that when he made any distinctions among them it was wholly in favor of the “unworthy” poor, by forgiving them much because they had suffered much. He did not condemn them to starvation and suicide upon the hypocritical pretext that they were “unworthy,” but they did apply the lash of scorpions without mercy to those self-righteous and “eminently respectable” gentlemen who robbed the poor and then despised them for their poverty; who made long prayers, where they could be seen of men, while they devoured widows’ houses and bound burdens upon the backs of their victims that crushed them to the earth.

Who and where are the “unworthy” poor and who dare in the name of Christ to judge them? I have seen the innumerable poor in all their agonizing poverty and hopeless despair, but I have yet to see an “unworthy” poor. They are all God’s creatures and they are all human beings, and how any one professing to be a Christian can warn the community not to give them a mouthful of food, but to turn them away to starve and die can only be reconciled with that whited sepulcher, which so often passes for “Christian charity.” A human being with a heart in him, unless it be of stone, would feed a hungry dog, to say nothing of a famishing fellow-being.

Do not tell me as an excuse that all these men could have work if they but wanted it. That is not true. On the contrary, it is palpably false. In the city of New York alone, according to the abstract recently issued by the national bureau of labor, there are nearly four hundred thousand of workingmen and women in enforced idleness and in the country at large there are literally millions for whom there is no employment. Here is where to place the blame instead of upon the helpless victims, the “unworthy” poor; and here, too, is where to apply the remedy.

But I do not blame even those who become hoboes and tramps, rather than spend their lives in slavish tasks for the benefit of others who look down upon them with scorn as beasts of burden. I would rather be branded as belonging to the “unworthy” poor than to be insulted by being classed with the “worthy” poor.

The “worthy” poor! Think of that! It is society’s inadvertent confession of its own crime. It is precisely as if we said “innocent convicts,” and yet made no pretension to setting the innocent victims free.

Bernard Shaw is right. Poverty is civilization’s greatest crime. And this crime cannot be atoned for by “charity.” Rockefeller’s Sunday school will count for no more than a brothel when the babies murdered at Ludlow confront him in the day of judgment.

Christ Driving the Money Changers from the Temple (1568) by El Greco. (National Gallery of Art)

Rockefeller’s income is a hundred million dollars a year. It is pure robbery. Not a dollar of it does he produce. It is all taken from those in whose sweat and agony it is produced, and that is the reason they are poor and tired and discouraged and get drunk and recruit the ranks of the “unworthy” poor. If I had to exist as many of those poor wretches do — and we have them at our very doors — I, too, would probably get drunk as often as I had the chance.

There is a cause for poverty, and that cause can be removed, and when it is removed there will be few, if any poor, “worthy” or “unworthy.” The very fact that a poor wretch is “unworthy” pleads most accusingly and irresistibly in his behalf. The cause of his “unworthiness” may be found in his heredity or environment, and in any event outside of and beyond himself, and he should no more be punished for it than if he were the victim of cancer or epilepsy.

A vast amount of fraud, hypocrisy, and false pretense parades as “charity” for the purpose of diverting attention from the cause of the poverty it affects to relieve.

It is not “charity” that the poor want, or that will change their unfortunate condition. It is justice, and to obtain that the whole modern world is in a state of increasingly intelligent and portentous agitation.

As long as the few own the sources of wealth, the machinery of production and the means of life, the many will be condemned to work for them as the miners of Colorado and Montana work for Rockefeller, with the result that the few pile up millions and billions and rot in luxury and self-indulgence, while the millions that are robbed riot and rot in poverty and filth. The exploitation of the many by the few is now on trial before the world, and when that trial is ended and the exploitation of man by man ceases and society is organized upon the basis of the enlightened mutual interests of all, democracy will dawn, men will be brothers, war will cease, poverty will be a hideous nightmare of the past, and the sun of a new civilization will light the world.