Home / News / General strike in Sudan to bring down military 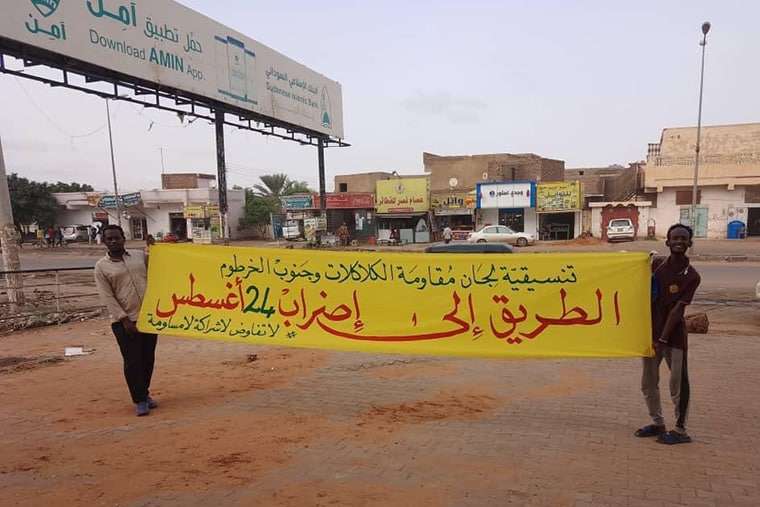 Workers building support in Khartoum for the general strike (Picture: @KQResist on Twitter)

Sudanese Resistance Committees—the grassroots bodies organising a fightback against the military regime—have called a general strike for Wednesday this week. Its stated aim is to bring down the military rule established ten months ago through a coup.

The Sudanese Professionals Association, a group organising  doctors, engineers, university lecturers and similar groups, said, “The strike is a form of peaceful ­resistance to dictatorial regimes, and it means paralysis of state institutions that the military and their allies have robbed and are trying to use to suppress us.”

Repeated mass demonstrations and the defiance from the Resistance Committees have prevented the regime establishing full control. But the state machine continues with its repression. Police and soldiers have killed at least 116 people on pro-democracy demonstrations since last October. Recently the ministry of the interior announced a new “Community Police”.

Opponents say it is modelled on the Public Order Police that ­spearheaded attacks on activists during the dictatorship of Omar al‑Bashir who was driven out in 2019. The general strike, if it mobilises as trade unionists hope, can break the regime’s plans. And it could link the issue of democracy and political justice with a deepening economic crisis hitting ordinary people.

Spiralling prices have left ­millions scrambling to afford basic goods, electricity and cooking gas bills, and transport costs. The Mena Solidarity network reports, “That has led to big strikes in some sectors over wages and conditions.

“Teachers across Sudan went on strike and boycotted exam marking in the spring this year, succeeding in forcing some concessions over pay and conditions. There were also strikes by civil servants and bank workers. After years when the trade unions were just arms of the ruling party, new unions are being built from below.”

The health sector also has strong independent union organisation through the doctors’ and pharmacists’ unions which have played a key role in the revolution. But the regime has been ­successful in sacking many revolutionary activists in other key sectors. Sudanese activists continue to call for solidarity from the international trade union movement. The organisers of a sit-in against the gold mining companies in River Nile State sent a message to British trade unionists recently. The Alliance of Demand-based Bodies (TAM), a coalition of more than 70 grassroots campaigns for environmental justice, workers’ and refugee rights said, “We commend the struggles of the British trade unions and support your demands.

“We want to build a ­movement ­without borders to raise the demands of ordinary people. The impoverishment of the majority for the benefit of a rich minority is clearly unjust. Big corporations are the source of great misery. Together towards the eradication of colonialism and exploitation.”

For solidarity initiatives and to send messages to the strikers go to bit.ly/Mena2408