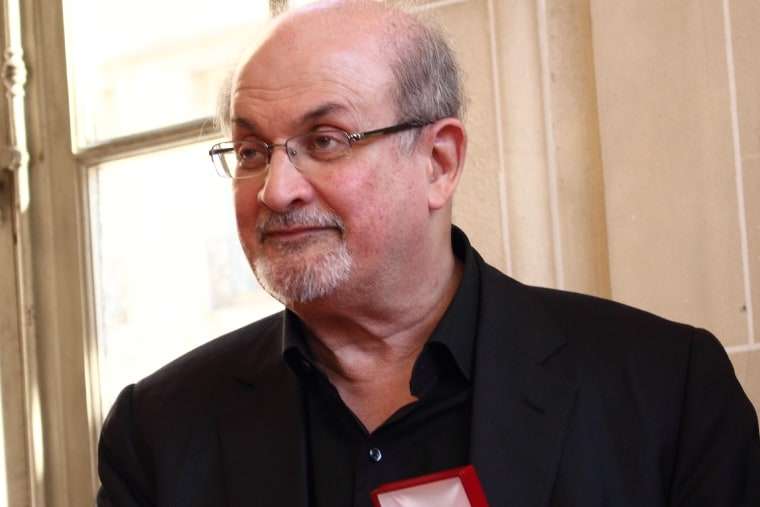 I am very proud to have been one of the two people to interview Salman Rushdie for Socialist Worker in February 1989. This was just before attacks on his novel Satanic Verses forced him into hiding. We interviewed Rushdie out of solidarity and in defence of his right to speak freely.

The right like to pose as champions of free speech, especially in the wake of the recent appalling attack on the author. Back in 1989, it was a different matter. Right wing historian Hugh Trevor Roper wanted Rushdie waylaid and beaten up by British Muslims.

Foreign Secretary, Geoffrey Howe, told the BBC that the book was not only offensive to Muslims. It is, he complained, “extremely critical, rude about us. It compares Britain with Hitler’s Germany. We do not like that”. Note the assumption that Muslims are not part of “us”.

Right wingers like him saw an opportunity to attack Rushdie’s right to freely criticise racism in Britain—which is much more central to the novel than any criticism of religion. They were quite happy to play along with reactionary Muslims—until it became clear that there was more political mileage to be made out of using the affair to whip up prejudice against “backward” Muslims.

Their defence of free speech was, and always will be opportunist and self-serving. For us free speech is a weapon to expose the brutal society that lies underneath the liberal veneer. It’s a vital tool for the oppressed and exploited to use in their fightback.

That doesn’t mean that every response in the name of the oppressed is defensible. Clearly, the burnings of Satanic Verses, the assaults and even killings of anyone associated with Rushdie were terrible. Socialists were criticised at the time for not joining in the hue and cry against “barbaric” Muslims.

But we stand with the oppressed, never with our rulers. We said both no to censorship and no to racism. Linking the two is the only way forward. I like to think that Rushdie agreed to being interviewed by Socialist Worker for that reason.

Attorney general Suella Braveran recently gave a speech on “equalities and rights, the conflict and the need for clarity” at a right wing think tank. It was an ideological attack on the fight for equalities for all oppressed people.

Braverman began by stating that “all rights, however noble, impose limits and obligations on other people, some with tricky trade-offs”. She asked, “Is it always right that minority groups impose their claims upon the rest of society?”

Braverman says that nobody is thinking of the consequences that granting more equality has upon wider society. Her attack included the very limited rights still afforded to immigrants. She said she is saddened to see how much equalities and diversity training has gone on in the civil service.

And, of course, Braverman also waded in to the discussion about trans rights, calling in effect for a hostile environment towards gender questioning students in our schools. Braverman sees equality as a zero-sum game but it isn’t a cake to be divided up until there’s no more left.

The fight for equalities is a fight to free our society from injustice and oppression. We should all oppose this Tory attempt to rescue themselves from their crisis by whipping up a culture war.

A word for class hatred

I disagree with Ralph Tebbutt when he objects to a Socialist Worker cartoon calling Tories “bastards” (Letters, 10 August). Although “bastard” originally meant someone who was born to unmarried parents, the modern meaning equates to a despicable person. Socialist Worker does not employ language that reinforces oppression, even if the target is a Tory or a boss.

However, Socialist Worker is right in using raw language that expresses class hatred such as calling the Tories “bastards” and even “scum”. Given the damage the Tories inflict on working class people this is the least they deserve.

Socialists must always consider their language carefully. We don’t want to reinforce negative stereotypes that can help divide the working class. Thankfully, calling the Tories “bastards” is something the whole class can unite around.

Call for co-ordinated action is catchy

The RMT union’s Mick Lynch addressed a 500-strong meeting of trade unionists and activists in Glasgow last week. It was vibrant, angry and determined. Lynch argued for class struggle to take on the ruling class and the Tories.

He was critical of the Labour Party, saying that if you weren’t with the strikers, you were against them. Further, he called on trade unionists to challenge their leaders if they were holding back the fight. I was able to speak from the floor and raised the issue of co-ordinated strike days by those who had balloted or were balloting for action, and others that were taking wildcat action.

It was very well received by the audience. Roz Foyer of the Scottish TUC tried to deflect away from my suggestion. But Lynch replied, saying it was not a bad idea. However, he said it shouldn’t be a priority at this stage. More important, he said, was building action and members supporting each other.

Judging by the feeling in this meeting, this idea of striking together is gaining ground. So much so that by last Thursday, Lynch was now also calling for coordinated action.

I love how working people are required to show that their wage claims are just and reasonable, while the government allows energy firms to raise their prices to a point where lives are put at risk.

I notice that wannabe Tory leader Liz Truss has taken British workers to task for being “unproductive”. My unproductive 12-hour working day in a hospice has just ended. It starts against in just a few hours time.

Liz, I understand, is entitled to 13 weeks paid leave. The man she wants to replace is still in post but permanently on his jollies. But Liz is right of course. Let’s all put in a bit more effort, guys.

Just as Socialist Worker said, after the heat came the floods (Socialist Worker, 17 August). Thames Water did “major work” on my street in recent months in a bid to get the drains working properly.

Yet half the area was again under water this week—just like last year—so the drains are still not working. My elderly neighbours have had their house flooded once again, and they only moved back in a few months ago. The only “major work” Thames Water has done is lining its shareholders’ pockets.

So I see Socialist Worker is very excited about strikes. That’s good but have you forgotten about politics? Even coordinated strike action won’t solve the problem of working people having no party to vote for.