Home / News / Democrats’ Midterm Prospects Are Looking Up. They Still Don’t Have a Long Game. 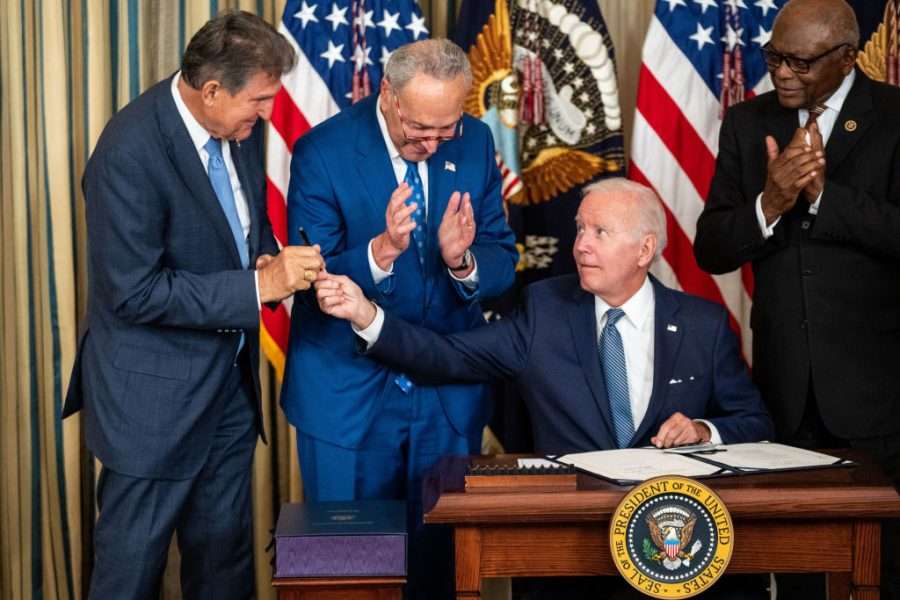 Democrats are hoping to win the midterms by touting the pared-down Inflation Reduction Act and their (modest) commitment to abortion rights. That might work in November — but it’s a poor strategy for reversing hemorrhaging support among working-class voters.

This spring, the Democratic Party’s prospects in the coming midterm congressional elections looked extremely bleak. With high inflation squeezing wallets, President Joe Biden’s approval ratings at record lows, and most of the party’s national policy agenda apparently dead in the water, a Republican sweep in November seemed likely. And the risky strategy being pursued by Democrats in some states — boosting far-right candidates in GOP primaries in the hope they’d be easier to beat in the general election — seemed like a dangerous Hail Mary from a party short on ideas.

But two things have happened since that may improve Democrats’ fortunes.

First, on June 24, the conservative-dominated Supreme Court overturned Roe v. Wade in a six-three decision in Dobbs v. Jackson Women’s Health Organization, in the face of overwhelming popular support for legal abortion. (Even voters in deep-red Kansas recently rejected a referendum proposal to strip abortion rights from the state’s constitution.) The ruling teed up abortion rights as a popular issue for Democrats to run on this November.

Second, congressional Democrats finally passed a (drastically pared-down) version of the Build Back Better Act (BBB), now rebranded as the Inflation Reduction Act (IRA), which Biden signed into law on August 16. The IRA makes a historic investment of $369 billion in clean energy, while also leasing millions of acres of federal lands for oil and gas production. (This aspect of the bill has led some environmental activists to call it “a renewable energy revolution on top of a fossil fuel buildout” or even a “climate suicide pact.”) It does not include any of the generous welfare measures of BBB, and the investment in clean energy was massively scaled back from that bill’s $125 billion per year for eight years.

But given that it seemed, until recently, that West Virginia senator Joe Manchin would block any major Democratic policy initiatives, Biden and progressives are certainly justified in viewing the IRA as a victory of sorts.

These developments could help the Democrats gain seats in November, or at least hold down their losses. But it’s an open question whether Democrats will effectively campaign on abortion rights and their legislative achievements.

On abortion, the party seems to be fighting with one hand tied behind its back. Biden and other Democratic leaders have denounced the Supreme Court ruling and declared their support for the right to an abortion. But they have done embarrassingly little to defend that right. Progressives like Alexandria Ocasio-Cortez have urged Biden to use aggressive executive action (by, for example, putting abortion clinics on federal lands in states with abortion bans) and to challenge the power of the undemocratic Supreme Court (for instance, by threatening to expand the court or impeach judges who lied about their position on Roe).

So far, Biden and congressional party leaders have refused to take such measures. At times, they’ve even made things worse. After it became clear that SCOTUS’s reversal of Roe was likely, House speaker Nancy Pelosi continued to back antiabortion congressman Henry Cuellar against a pro-choice primary challenger. And Biden abandoned a plan to nominate an antiabortion lawyer to a federal judgeship in Kentucky only weeks after the anti-Roe ruling. (The administration’s stated rationale for withdrawing support was just that Kentucky senator Rand Paul wasn’t supporting the nomination — not that there was anything wrong with filling the judiciary with more abortion opponents.)

Over a month after the Dobbs decision, Biden finally issued an executive order to protect access to abortion, though many advocates insist that the president could do much more (including opening abortion clinics on federal land, as AOC has suggested). “Nothing in [Biden’s] executive order will fundamentally change the everyday lives of poor women in a red state,” Georgetown professor Lawrence Gostin told Vox.

In short, the Democrats want to campaign and fundraise as the champions of reproductive freedom while putting up a rather uninspiring fight. It’s an open question whether the Democrats’ lackluster efforts will be enough to turn out abortion rights supporters in November, with some voters clearly upset over Democratic passivity on the issue.

Still, the Democrats’ spotty defense is obviously preferrable to the zealous Republican assault on abortion rights, and that may be enough come Election Day.

Democrats are also hopeful that the recently passed IRA will give them something popular to run on.

Though it falls far short of the Left’s ambitious Green New Deal vision or even of the Democrats’ original BBB proposal, the IRA includes some welcome measures: it puts about $370 million toward climate and energy investments (including subsidies for renewable energy), allows Medicare to negotiate the cost of certain prescription drugs, and imposes a 15 percent minimum tax on corporations making at least $1 billion a year.

Again, the question is how much all this will matter to voters. Despite its name, the Inflation Reduction Act won’t do much to address the cost-of-living crisis for most workers. And nothing in the bill is as much of a straightforward political winner as many of the BBB welfare-state proposals, like expanding the child tax credit or introducing paid family leave or universal pre-K.

It remains to be seen whether public messaging about the IRA — of which most Americans are still unaware — will have an effect on voters, who still seem to have a very negative view of Biden.

Taken together, the Dobbs decision and the IRA — and perhaps the congressional hearings on the January 6 Capitol riot, though polls are mixed about how the hearings are influencing voters — may be enough for Democrats to maintain control of Congress come November. But the party’s milquetoast response to Roe’s demise and its downsized legislative achievements are symptomatic of deeper difficulties, which will haunt Democrats even in the event of an at-best-narrow midterm victory.

First, despite their occasional strident rhetoric, leading Democrats do not seem to take seriously the threat to democracy posed by the ever-harder-right GOP and Supreme Court. If they did, Biden and company would take more aggressive measures to reduce the power of the Supreme Court and hold accountable the congressional Republicans involved in lawbreaking on January 6. And certainly, they would not back far-right candidates or fund GOP primary attack ads against Republicans who supported Donald Trump’s impeachment.

Second, Democrats’ failure to tackle the Supreme Court head-on or to support filibuster abolition shows that party leadership is too married to the United States’ undemocratic political institutions, which empower the Right and block progressive reforms. With a filibuster-proof Democratic Senate unlikely any time soon, and the prospect of restoring a liberal majority to the Supreme Court years away at best, it’s hard to see how Democrats could do something as simple as codify abortion rights into federal law, much less pass ambitious welfare policies like those in the original BBB.

Third, the party’s caucus is ideologically split, with a left wing represented by the likes of Senator Bernie Sanders and the Squad, a right wing embodied by Manchin and Arizona senator Kyrsten Sinema, and party leaders like Biden, Pelosi, and Senate majority leader Chuck Schumer more or less triangulating between the two. Throughout Biden’s administration, the right wing has generally succeeded in stalling the party’s policy agenda and whittling it down. As long as congressional Democrats are hostage to conservative Democrats like Manchin, it’s unlikely they’ll be able to enact the sweeping FDR-style programs that we were promised when Biden took office.

One response to this predicament is to say that progressive Democrats need to start winning in less solidly blue districts and states — especially among working-class voters, whom the party keeps bleeding — to increase their footprint in Congress and weaken the party’s reliance on votes from the Manchins and Sinemas. Then Democrats will be able to pass the more ambitious policies that progressives want.

This is only part of the story, though. The Left does need to start picking up seats outside of liberal enclaves and winning more working-class votes. But it will likely be severely handicapped in doing so if it’s associated with a national party that seems unwilling or unable to push through reforms that noticeably improve the lives of most working people. Most voters won’t make fine distinctions between what policies different wings of the party support. They will simply see a party that is not helping them much, even when it holds all three branches of government.

Nor is it true that right-wing Democrats like Manchin bear all the blame for Democratic inaction. There are plenty of popular things that Biden could do via executive order to help ordinary people — besides the measures on abortion mentioned above, he could also cancel student loan debt, effectively legalize marijuana, or use “patent seizure” to lower prescription drug prices. And whether you think they would have ultimately prevailed, neither Biden nor the Congressional Progressive Caucus even used the leverage they did have at their disposal to try to get Manchin to agree to BBB.

If the Left wants to win major reforms, it does need to win more elections. But to push politicians to act, we also need mass disruption in the workplace and in the streets, of the kind we saw in the New Deal and civil rights eras — the last times Congress passed sweeping social or economic reforms. Both of these things will be more likely if progressives and socialists publicly articulate and organize for a working-class political alternative. It must be ready to confront the GOP as well as the Democratic establishment, represented by both the right-wing Manchin and the triangulating Biden. Fighting for reforms that directly benefit working people is, in turn, key to building a popular coalition that can stop the gains of the pseudo-populist far right.

Until then, we can expect Democrats to muddle down the middle of the road, armed with the underwhelming pitch that they’re better than the other guys. And they will watch the prospect of winning back working-class voters — and building a durable electoral majority that can push through badly needed reforms — recede further in the rearview mirror.

Whatever happens in November, it will be up to the Left to build the movement that the Democratic Party can’t.