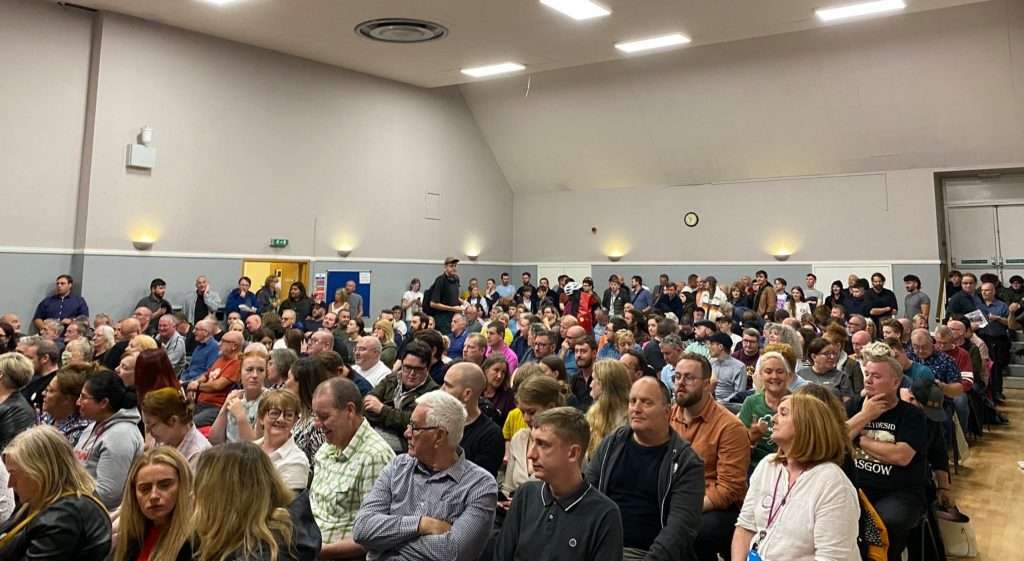 The audience at the strike support rally in Glasgow – photo by Calum B.

On Tuesday 16 August around a thousand people packed into Glasgow’s Renfield Centre to attend a strike solidarity meeting called by the RMT. The room was so full that an overflow room had to be set up in the canteen upstairs. Mick Lynch of the RMT was billed as the main speaker, but the meeting was built around highlighting other disputes and creating links of solidarity between them.

Caitlin Lee described the successes of Unite in recruiting and organising in the hospitality sector. She was followed by a rousing speech from a senior CWU rep, outlining the fight that the union faces with the bosses of BT and the Royal Mail.

Roz Foyer, the General Secretary of the Scottish TUC, also spoke in support of the growing strike movements, issuing a call to support a national demonstration in Edinburgh on the 8th of September demanding a pay rise for Scottish workers. Following Mick Lynch’s speech the floor was opened to reports from other unions in dispute, including ASLEF, the UCU and the GMB.

The general mood was excited and confident. Whilst waiting for the meeting to start I was chatting to the young man sitting beside me who told me that he is involved in getting the GMB recognised in the Apple store in which he works. Word is spreading to other Apple stores, who are seeking his advice in getting organised.

A UCU member, speaking from the floor, asked whether the unions were able to organise co-ordinated strikes with other unions. Roz Foyer and Mick Lynch both said they couldn’t call a general strike, which I felt ducked the question. This surprised me as I have read that Mick Lynch is in favour of coordinated action, which in linking up existing disputes would fall far short of a general strike.

Despite this, there felt like a real buzz in the room. As Mick Lynch said, the working class is back! Let’s hope the trade union bureaucrats don’t lead a growing movement into a dead end. Victory to all striking workers!