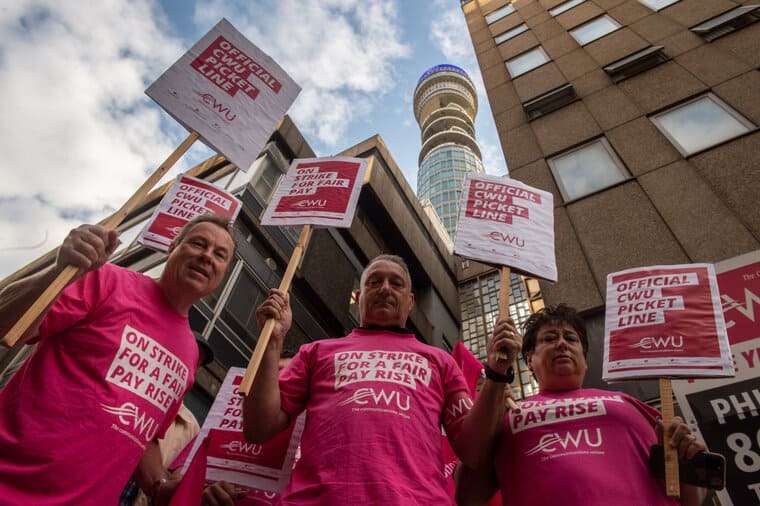 BT workers—just one group of CWU union members striking this week—on the picket back in July (Picture: Guy Smallman)

Royal Mail and Post Office workers were set to bring the whole of the postal service to a near-halt on Friday of this week. It marks the beginning of four major days of joint and coordinated action by more than 150,000 postal and telecoms workers in the CWU union.

Postal workers in Royal Mail are striking after bosses imposed on them a below-inflation pay increase of just 2 percent earlier this year. The action set to take place on Friday will be the first time Royal Mail workers have struck nationally in 12 years. And the union has said it wants “every single striking CWU member on the picket lines.”

Mark Dolan, a CWU rep at Royal Mail in north London, told Socialist Worker, “We want a big picket at every delivery office, mail centre and workplace. We want it big, bright and vibrant. Nationally we want as many people as possible on picket lines.”

Friday’s strike comes as workers at Post Office are also set to strike on the same day. The workers in crown offices—the large, state-owned branches—and admin and logistics grades, have already struck over pay. Their strikes have forced bosses to make an increased offer of 5 ­percent—but this is still a ­real-terms pay cut. Crown offices are set to strike again on Saturday, and logistics workers on Tuesday of next week.

Mark added that Royal Mail bosses had already said they planned to close delivery offices—the small, local sorting offices—during the strike. “That’s not something they’ve ever done in my 40 years in the industry,” Mark said. Instead, Royal Mail wants to try a skeleton scabbing operation by ­managers from 379 “parcel hubs”—a possible trial run for major changes facilitated by attacks on jobs and conditions.

Bosses want to force through sweeping changes such as making Sunday a normal working day, and introduce “seasonal hours”—longer days in winter and shorter in the summer. They also want different terms and conditions for new ­starters—effectively creating a two-tier workforce.

In a sign of the hugely widespread anger at this, Royal Mail workers voted to strike against these changes in another ballot last week. They voted by 98 percent to strike on a 72 percent turnout—after a similar thumping strike vote in July over pay. CWU union leaders are formally keeping the issues of pay and conditions separate, fearing a legal challenge to their strike ballots.

The strikes on Friday, Wednesday of next week, and Thursday 8 and Friday 9 September are officially about pay only. But pay and conditions are linked. Royal Mail chief executive Simon Thompson wants union leaders to sign up to changes in return for an improved pay offer.

Workers have already hit back at Thompson ­whenever he posts on Royal Mail’s internal Workplace app to criticise the strike. “He gets absolutely hammered every day, every time he puts a post on there,” Mark said.

He added that, with Thompson provoking a showdown—and in the context of broader pay attacks on all workers, “This has the potential to be a very nasty and bitter dispute. This is not going to be a couple of bouts of strikes and then it’s all over,” said Mark. “You only have to look at how the Network Rail strike is going to see that. This is going to be part of a much bigger picture.”

‘We share the same battle,’ says a telecoms striker

Telecoms workers in BT and Openreach—also CWU members—are also set for two days of strikes on Tuesday and Wednesday of next week. It means that on Wednesday next week the two big battalions of the CWU—BT Group and Royal Mail—will all be striking together. Jonathan Young, a CWU rep for Openreach workers in London and the south east, told Socialist Worker the strike would be “a sign of solidarity across the union.”

“We all share the same battle and the same goal,” he said. He added that the union hopes to get particularly big picket lines at the most visible telephone exchanges, or which are close to Royal Mail workplaces. Just like Royal Mail workers, BT and Openreach workers are also striking after their bosses imposed a pay increase of just £1,500 across all grades. It was a real-terms pay cut for even the lowest paid.

It comes after two solid days of action at the end of July—their first national strike since 1987. Jonathan said the number of people who went into work then “were few and far between in the south London area.” “There were good picket lines, with even a barbeque and music playing in Crayford.”

Jas, an Openreach engineer, told Socialist Worker, “I’ve heard it was a very strong turnout nationally across the board. I’m hoping we get as good a turnout as last time. The feedback I’m getting is that people are very much open to striking again. Talking to colleagues, I don’t expect any let up.”

Get behind these strikes

40,000 BT and Openreach workers in the CWU plus Post Office supply chain and admin