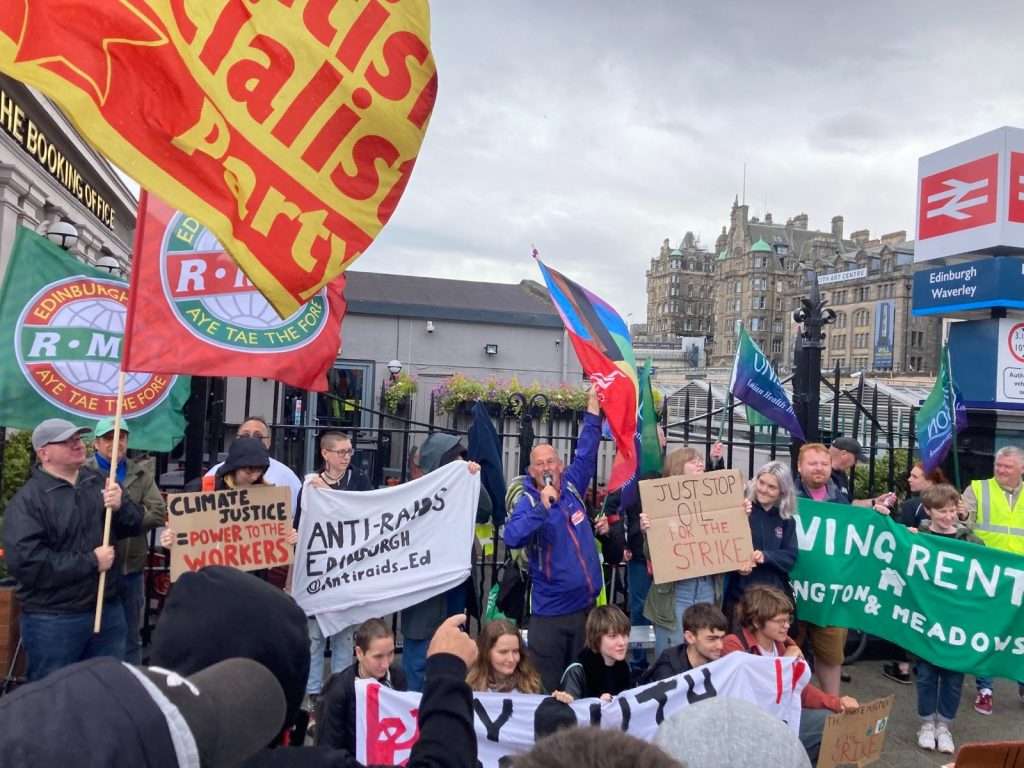 Comedians Mark Thomas, Kate Smurthwaite and Attila the Stockbroker were among the 150-strong crowd who gathered outside Waverley Station on a grey and drizzly Edinburgh morning on Saturday 19 August in a show of solidarity with striking workers.

Edinburgh is now in full Festival mode, but this year the entertainment can’t avert its eyes from the growing reality of hardship that is afflicting Edinburgh residents and workers. Cases of homelessness in Scotland continue to increase and at the end of March this year 8,635 children were living in temporary accommodation. This number is only set to worsen over the coming months with the growing cost of living crisis.

Edinburgh’s streets have also seen litter piling up as GMB/Unite bin workers take part in an 11-day strike – having rejected a paltry 3.5% pay offer as inflation hits 11.8%. As revealed in a recent Conter article, there is evidence of strike breaking having taken place with the full knowledge of the Council itself.

The rally was called on a national rail strike day, although Scotrail union members were not participating in the strikes themselves.  The line-up included speakers from unions including CWU (set to strike next week), Unison and Unite. The focus of speeches was mainly on the reasons behind the strikes – overwhelmingly pay and deterioration of terms, conditions and the services themselves. All speakers stressed the need for solidarity and that they were determined to fight till a victory is secured. All the speakers recognised that this was about much more than just a bread and butter issue for the individual unions concerned – this was a struggle for the working class as a whole.

Interestingly, there wasn’t really much mention of the Labour Party and its lack of support, although the RMT speaker did stress that workers would fight despite Labour’s ‘neutral’ position. There was also only a mention in passing of the new initiative Enough is Enough.

However, for a rally in the Scottish capital city, there was also little mention of the Scottish government and its relative silence over the cost of living crisis, nor any comments about how an IndyRef2 campaign could be used as a vehicle for raising the demand for greater control over, and fairer distribution of, Scotland’s resources and wealth. While an overall political focus on Westminster might seem understandable, it nevertheless lets the SNP leadership off the hook, when they could undoubtedly be doing more to address some of the social ills that are within its control.

The name of the late RMT leader Bob Crow was heard several times during contributions and was the topic of a poem read out by Attila the Stockbroker. Attila told the rally he had been asked by the BBC to pen a poem after the union leader’s passing in 2014, but then was informed over the phone by a mild-speaking employee that they couldn’t broadcast it because it wasn’t ‘balanced’ enough. The role of the media and its reporting of the strikes was also mentioned by other speakers, with Mick Lynch, and his confident and adept ‘no-nonsense’ dealing with interviewers and politicians, acknowledged as having been an inspiration to many workers and a boost to union membership uptake throughout the country.

Comedian Mark Thomas stressed that workers now had a chance to win, again referring to the late Bob Crow’s adage: If you fight, you might lose but you might win. But if you don’t fight, you always lose.

The Unite speaker held both a Unite and Pride flag. He stated that 30 years ago it would have been practically unheard of for those two flags to come together, but now the attacks from the Tory government were driving groups into solidarity. He then called upon the different campaigns that had come to the rally to bring their banners to the front for everyone to see. Amongst them were Living Rent, Anti-Raids Edinburgh and climate activists.

With many other groups of workers either balloting or looking likely to ballot over action, there is a growing sense of a window opening. As Sir Keir’s absent Labour party bleeds members at a time when it should be growing, it is now the trade union leadership that is stepping up to lead the nascent movement. That brings opportunities but also dangers: Mick Lynch was after all the union leader who instructed sacked PO employees occupying a ferry in Hull to leave the ship, when an occupation could have helped turn the situation around.  Nevertheless, the mood is changing. The public is increasingly in support of the strikes and there is a growing, if uneven, class consciousness, an awareness that it’s us against them. The task for the left now is to build the confidence, spread the solidarity and to argue for more coordinated and sustained action. That way there may at long last be an opportunity to turn the last decades of defeats into a victory for our side.