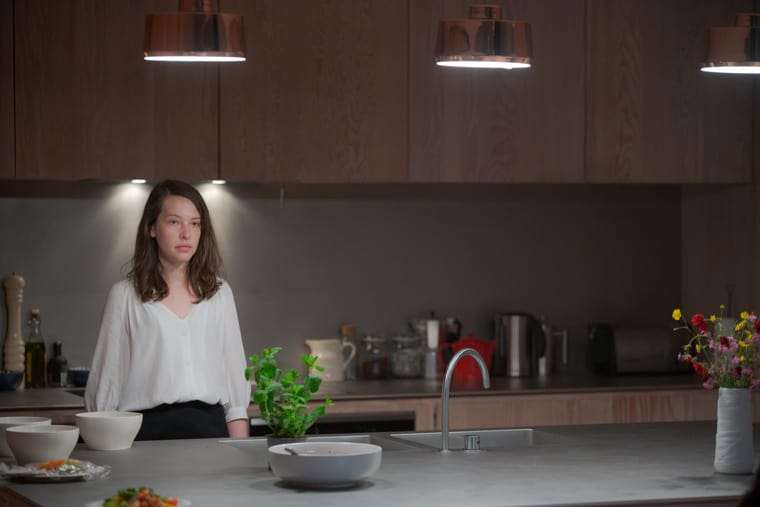 Behind a vacant expression, Cadi is not quite who she seems, in The Feast

The Feast is a film where from the start you know that something bad is going to happen to the characters. But in this film, you actually really want it to happen.

The whole 93 minutes centres on a dinner party in the ultra-modern rural home of a rich Welsh family. Every member of the family is consistently unlikeable. But this is aided by the fact they are all unconvincing caricatures.

From the MP dad and the glamorous mum, to the drug addicted son and his polar opposite fitness fanatic brother. Each character is cold and clinical to a peculiar degree. It feels rather forced, but it is probably meant to represent the dullness of absurd wealth.

The most peculiar person in The Feast though is our unlikely protagonist. Cadi—a young woman hired by the family to work as an assistant during the dinner party. She is overly quiet, moves painfully slowly, and has a permanent vacant expression.

She enters the scene with lank, wet hair that no one seems to acknowledge. It’s peculiar, but all is explained later.

The precision of each scene and the visual spaciousness around each character feels stifling and it’s a slow burn to the film’s climax. The interactions between the characters, particularly with Cadi, become increasingly tense and awkward.

But it’s not until the party is in full swing that we learn the real purpose of the occasion, and Cadi’s intentions. Two additional guests for dinner include a business associate of the family and a neighbour, Mair. The real motive for the occasion is now laid bare.

The group suggest to Mair that her farming land is an “asset” that the family wants to buy for mining exploration. Mair is horrified, but it’s not just the family’s greed that perturbs her—it’s more to do with her superstition.

What follows is a revengeful pay back as the greed of the family comes to a violent conclusion.

The Feast is a cautionary tale that mixes folklore with classic horror, where the supernatural meets blood and gore. Cadi’s wet hair was the first sign that she is not quite who she seems.

The Feast ultimately feels limited. It explores several themes, but only at a surface level. And the rigidity of the characters stops the audience from delving into anything with meaning.

It is seemingly an attempt to paint extractivism as the nasty business that it is, and the rich as opulent vultures who will stop at nothing, whatever the cost.

But getting that message across could be done with more depth to make it a compelling watch. It’s refreshing to watch a feature length film entirely in the Welsh language, particularly in a genre not everyone can stomach.

And as a feature debut for director Lee Haven Jones, hopefully The Feast leads to more work with Welsh actors reaching audiences outside of the country.

The Feast is in cinemas now