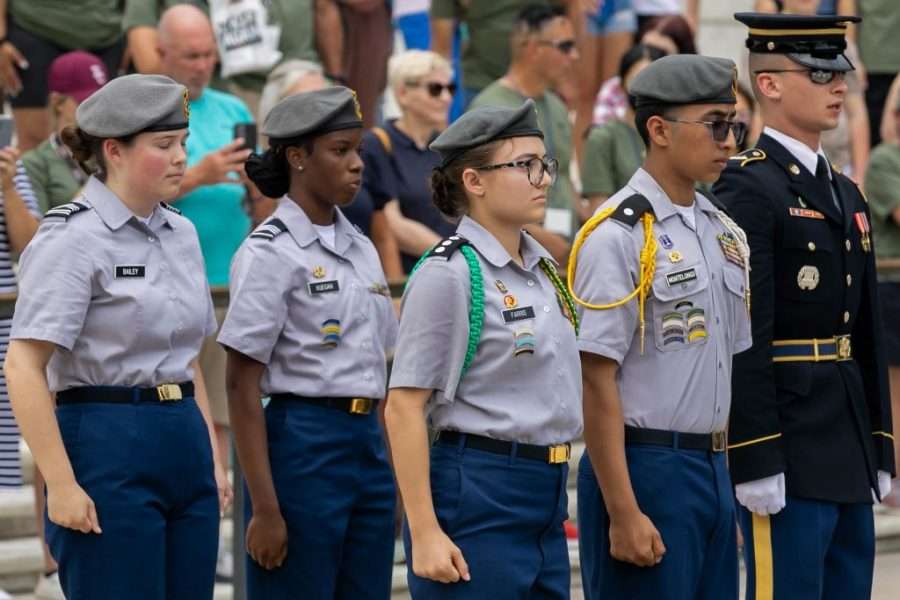 We’ve long known that the US armed forces target poor and working-class students to meet their enlistment goals. But according to a recent report, the military’s JROTC program is also rife with sexual misconduct and outright abuse of young women.

Army JROTC cadets participate in a wreath-laying ceremony at the Tomb of the Unknown Soldier in Arlington National Cemetery on June 21, 2022, in Arlington, Virginia. (US Army Cadet Command / Flickr)

Fifty years ago, no symbol of university complicity with the military angered more students than the on-campus presence of the Reserve Officers’ Training Corps (ROTC). The manpower requirements of the Vietnam era could not be met by conscription, draft-driven enlistments, and the graduating classes of military service academies alone. The Department of Defense also needed commissioned officers trained in DOD-funded military science departments at private and state universities.

Anti-ROTC campaigning became a major focus of the campus-based movement against the Vietnam War. Critics demanded everything from stripping ROTC courses of academic credit to, more popularly, kicking the program off campus. Foot-dragging by college trustees, administrators, and faculty members reluctant to cut ties with the military sparked an escalation of protest activity, from peaceful picketing to more aggressive action. ROTC buildings were trashed, bombed, or set on fire — most famously at Kent State University. There, a May 1970 arson attempt triggered a National Guard occupation that led to the fatal shooting of four students (one of them a ROTC cadet) and then the largest student strike in US history.

As historian Seth Kershner points out, after US troops were withdrawn from Vietnam and the draft ended in 1973, “high schools became the answer to the Pentagon’s manpower problems.” While the armed forces beat a strategic retreat from the Ivy League and some elite private colleges, enrollment in public high school Junior ROTC programs (JROTC) mushroomed. About half a million teenagers now get military training in 3,500 schools around the country, many of which serve poor and working-class students.

According to a New York Times analysis, “Majority-minority schools are nearly three times as likely as majority-white schools to have a JROTC program.” About 40 percent of the cadets who spend three years in such programs end up enlisting after graduation. This makes JROTC a key component of the Pentagon’s annual struggle to meet its “all-volunteer force” recruitment quotas. As of late June, for example, the Army had only 40 percent of the 57,000 new soldiers it wants signed up by September 30 — and is now offering enlistment bonuses as high as $50,000.

JROTC programs are promoted not as a pipeline to active duty but as a valuable source of adult mentoring, exposure to military discipline, and inculcation of civic values. Cadets get to drill in uniform, handle weapons, learn military ranks and history, and stand at attention when visitors come to their classes. Their instructors are military veterans certified by the DOD, but many states don’t require them to have either teaching certificates or a college degree. In addition, the DOD leaves day-to-day monitoring of their performance to school administrators busy with many other responsibilities.

That lax oversight has had calamitous results. As the New York Times recently revealed in a major investigative piece, at least thirty-three JROTC instructors have engaged in sexual misbehavior with young women in the program during the last five years. And that JROTC rap sheet does not even include the “many others who have been accused of misconduct but [were] never charged” or the inappropriate behavior that went unreported because cadets were afraid of jeopardizing their potential military careers.

The front-page revelations have sparked outrage from two House members with government oversight functions. In an August 15 letter to DOD secretary Lloyd Austin and the secretaries of the Army, Navy, and Air Force, US representatives Carolyn Maloney (D-NY) and Stephen Lynch (D-MA) called incidents of sexual harassment and abuse “completely unacceptable and an abject betrayal of the trust and faith these young men and women placed in the U.S. Military.” The House members specifically demanded to know what action Pentagon leaders are taking in response to the reports, including whether additional oversight of JROTC instructors is being planned “to ensure the safety and well-being of cadets.”

Unfortunately, if the DOD’s past response to sexual harassment and assault of women in uniform by fellow soldiers is any guide, its efforts to protect vulnerable teenagers from preenlistment exposure to “military culture” will also be inadequate.

Two years ago, a major scandal over violence against female soldiers at Texas’s Fort Hood seemed to have persuaded enough members of Congress that sexual assault in the military required more aggressive investigation and prosecution. By May 2021, sixty Senate Democrats and Republicans favored a bill cosponsored by Kirsten Gillibrand (D-NY) and retired National Guard lieutenant general Joni Ernst (R-IA), a sexual assault survivor. Under their proposal, decision-making power about such cases and other felonies, including some hate crimes, would be removed from commanding officers and assigned “to a specially trained team of uniformed prosecutors.”

But two veterans on the Senate Armed Services Committee, Rhode Island Democrat Jack Reed and Oklahoma Republican James Inhofe, fought to narrow the scope of the legislation, limiting it to sexual assault cases only. Their deference to the Pentagon aided Secretary Austin’s own battle against reform. In November 2021, a bipartisan group of eight senators, including Gillibrand and Ernst, strongly objected to further foot-dragging by the former four-star general. “The men and women who serve in our military cannot continue to operate another day, let alone another decade, under a chain of command that is unwilling or incapable of taking decisive action to address this epidemic,” they wrote in a joint letter.

A month later, Congress passed a watered-down measure that did not strip commanders of their control over court-martials but did empower new “special victim prosecutors” to handle cases involving sexual assault, rape, murder, and domestic violence. Gillibrand called the compromise a “disservice to our service members.” And these new prosecutors have no power to aid the “special victims” of JROTC, who have been severely harmed before even becoming a service member.

The criminal behavior of so many “military science” instructors, implanted in public high schools by the DOD, could have two unintended consequences. First, it could give campaigners against such programs a new issue to organize around. Their grassroots efforts are well described by Kershner and Scott Harding in their 2015 book, Counter-Recruitment and the Campaign to Demilitarize Public Schools, which documents JROTC targeting of “under-resourced schools and low-income communities, where opportunities are limited and young people are susceptible to the military’s promise of career advancement and college benefits.”

Second, as Maloney and Lynch note, negative publicity about JROTC could further dampen enthusiasm for enlistment. Even with the Pentagon dispatching some 20,000 recruiters, spending $1.4 billion every year on 1,400 military recruiting stations, and gaining wide access to high schools throughout the country, only one in ten young people say they would consider military service. As Major General Edward Thomas Jr, commander of the Air Force Recruiting Service, says of that polling result, “There are just lower levels of trust with the U.S. government and the military.”

In addition, among seventeen- to twenty-four-year-olds targeted by recruiters, three-quarters have disqualifying conditions like no high school diploma, a criminal record, chronic obesity, or some other physical or mental health problem that renders them ineligible to serve without a special waver. Among those in the last category are at least a few of the scarred survivors of Junior ROTC. One, profiled by the Times, is Victoria Bauer from Picayune, Mississippi, who wanted to become a Marine before she was sexually assaulted, at age fifteen, by her instructor. Bauer’s traumatic experience led her to engage in self-harm that left scars on her leg, now covered with heavy tattooing. To this day, she still wants to know why those ostensibly responsible for defending the United States can’t even protect their “own people.”