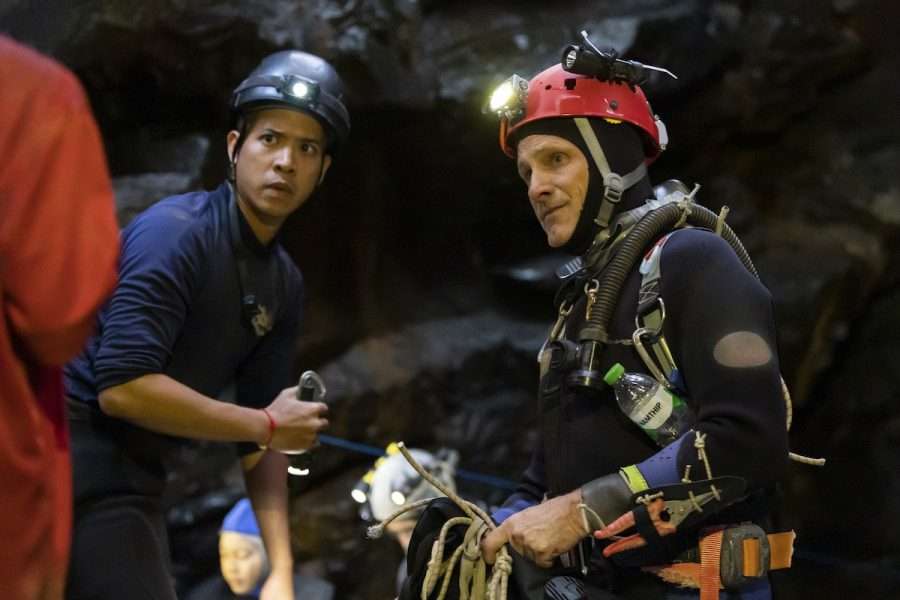 At the heart of the new film Thirteen Lives lies a paradox. On the one hand, Ron Howard can be boring and annoying. On the other, caves are really cool, and we all want to see a group of teenagers get rescued from deep in the bowels of one.

I finally got around to watching Thirteen Lives, the drama on Amazon about the Thai cave rescue of 2018. If it seems like a familiar narrative, that’s because the rescue was not only a breathlessly covered international media event, it’s also the subject of a 2021 documentary called The Rescue.

I was reluctant to watch Thirteen Lives because it’s directed by Ron Howard, a “meh” conventional talent at best. And to top that off, his last film was Hillbilly Elegy, which damns him to Film Hell forevermore. He is not, and never will be, forgiven.

But on the other hand, caves are cool, and they’re intensely cinematic, as long as the inevitable reproduction of cave environments is done well for the purposes of filming, which it is here. Cinematographer Sayombhu Mukdeeprom does an impressive job seamlessly matching cave sets to the location shooting in Thailand.

The film is a relentless (though overlong) rescue procedural that’s pretty tense at times, even though you already know how it will end. If you recall, the crisis involved twelve boys aged eleven to sixteen comprising the junior soccer team the Wild Boars, along with their twenty-five-year-old coach, Ekapol Chanthawong (Teeradon Supapunpinyo), who went cave exploring for fun one fine day and got trapped deep underground in the Tham Luang Nang Non cave system, because the monsoon rains came disastrously early that year.

The torrential downpour made a rescue extraordinarily treacherous, with narrow flooded channels, frighteningly strong currents, and a very long distance for any diver to travel. As we see in the film, some of the crevices the divers squeeze through are almost too small to allow an adult wearing scuba gear including an oxygen tank to pass through them.

They’re so aware of their status as top divers in the world that Volanthen is watching the media coverage of the crisis and expecting a call any minute requesting his services. He in turn phones his curmudgeonly friend Stanton to ask him to stand by and be ready to go when needed.

“I don’t even like kids,” grouses Stanton, a loner who hates ballyhoo of all kinds.

Both are also conscious of the inevitable jealousy of the other top divers they know if they aren’t asked to go. One of them, Australian diver Richard Harris (Joel Edgerton), is brought in later and has an amusing bit where he tells each boy about to be rescued by a different diver in a four-man team, “You’re lucky, because you’ve got the number-one diver in the world.”

There’s been inevitable criticism of the film for its “white savior” structure, giving far greater emphasis to the heroic efforts of the British and Australian divers than to the vital contributions of the Thai Navy SEAL divers, as well as the Thai-American irrigation engineer (Gerwin Widjaja) who led the effort to divert the relentless monsoon downpour onto local farmers’ fields, after getting the permission of the farmers who know their crops will be destroyed in the process.

As Pat Brown of Slant magazine puts it,

The film’s first and rather rushed opening stretch focuses on the young soccer players and their coach, and as the dialogue is spoken entirely in Thai, the viewer may begin to question why a Westerner like Howard was recruited to oversee the project in the first place. And then the white people show up [in the film], and it becomes clear that Thirteen Lives isn’t actually all that concerned with the soccer team.

Still, a natural resentment can lead to some odd claims:

The depiction of the drowning death of a here nameless Thai Navy SEAL (Wirot Nilphongamphai) is almost as unnerving as it’s surely intended to be. But overall, if one benefit of fiction is that it can take us beyond mere record-keeping, that’s one potential that the filmmakers appear relatively uninterested in exploiting.

In fact, the diver is very much named and treated with considerable reverence, when Saman Kunan (Sukollawat Kanarot) dies in the rescue attempt. The film is dedicated to him.

But it’s true that it’s hard to suppress an inward groan at recognizing the film’s structure. It seems so Ron Howard to represent the rescue this way — though, to be fair, it’s also so Hollywood and so capitalist-profit-motive to do it this way — when it would’ve been easy to divvy up the narrative more equally among the different rescue teams and to characterize at least the Thai team leaders more thoroughly and colorfully.

The fact that Mortensen and Farrell are major stars tilts the movie toward them. Plus, they’re both excellent in their showy roles as middle-aged pals and veterans of many adventures together who are nevertheless comically opposite in temperament. Farrell’s Volanthen is such a bighearted mensch, he can hardly pass anyone by without interacting with them on a warm, personal basis. Mortensen’s misanthropic Stanton, on the other hand, endures most other people with grimacing impatience.

The surprising structure of the film, which is long at two hours and twenty-seven minutes, does indeed sideline the imperiled boys in a startling way early on. We follow them only until they head into the cave, at which point we shift to the discovery by their families that they’re missing. From then on, screenwriter William Nicholson (Shadowlands, Nell) and director Howard keep the focus on the phases of the international rescue effort, charted day by day and featuring cave maps to show the tortuous six-hour dive required to reach the boys.

That shot of the carefree boys disappearing into the cave early in the movie is such a dramatic “last look,” I wondered if Howard was inspired by 1975’s Picnic at Hanging Rock, a fictional Australian film about a group of schoolgirls who hike up the side of a mountain, which is a dead volcano, and disappear completely, never to be seen again. It had such an impact on audiences, some people believed it was a true story and would travel thousands of miles to see Hanging Rock. Picnic has a momentous shot early in the film, similar to Thirteen Lives’, of the girls turning to take a final look back before they’re gone forever, with a long narrative to follow dealing with the failed attempt at rescue and the eerie fallout of the event.

In Thirteen Lives, we know that the boys were found, well over a week into the rescue effort. They were starving, but they were doing remarkably well in terms of morale, because their coach, a former Buddhist monk, had trained them in meditation and mutual support. We learn this in the brief interludes when the divers are with them. As soon as the divers leave them, they shut off their meager light sources and lie down to sleep in darkness, in order to conserve energy and scant resources as well as preserve their own sanity.

Thus emphasized, their mental strength seems as if it’s going to be demonstrated later in the rescue. It would constitute the payoff for an earlier scene in which Stanton has to help an adult male member of the Thai rescue team who’s been unexpectedly trapped by the suddenly rising waters in the cave. Though the man has been provided with Volanthen’s mask, breathing tube, and oxygen tank and is being guided underwater by Stanton, he freaks out midway through and almost dies because of his own disorientation and terror in the murky depths.

“Well, that was exciting, and not in a good way,” comments Stanton.

Later, Stanton uses this as an example of how impossible it’s going to be to get the boys out of there alive. Locating the missing soccer team is only the first stage of the rescue. After that, the real impossibility is extracting them in conditions that are beyond the endurance of most highly trained divers. And there’s no way to outwait the monsoon season, which is months long — the boys and their coach will die of oxygen deprivation long before then. The film relies on how these grim conditions are bound to work on the imagination.

But ultimately, because of the divers’ highly risky and unorthodox way to save the boys — which is too much of a spoiler to reveal — there’s no payoff using the boys’ remarkable mental toughness as an aid in their own rescue.

A bitter side effect of watching the film, which is surely intentional, is the awareness that this kind of international cooperation that can accomplish miracles is so rarely deployed. Certain people in peril are saved at vast expense and tremendous effort, while many more others around the world are left to perish in obscurity every day.

And, needless to say, there’s no massive five-thousand-person international team effort assembled, in full view of enormous media coverage, to address such a dire global threat to human survival as climate change catastrophe, which no doubt played a role in the early monsoon season that trapped the boys in the cave. Maybe someday, once we’ve overcome the barriers of national borders and free-market forces to assemble a worldwide team that cooperates to pull off the impossible dream of halting climate disaster, we’ll get a gripping thriller out of it.