Home / News / Water Privatisation Has Been an Irredeemable Failure 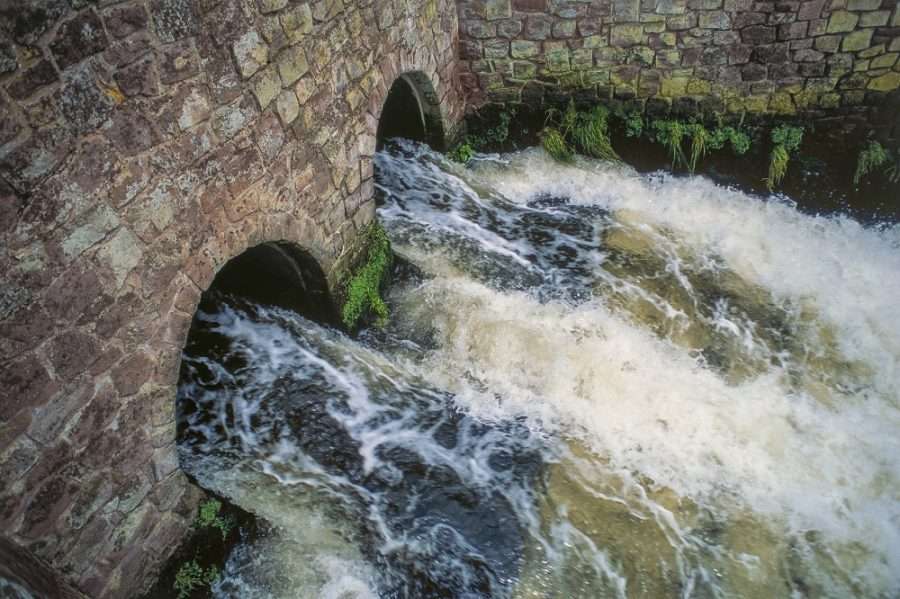 Britain’s beaches are filled with sewage and leaks waste billions of litres of water a day, while water company executives take home six-figure bonuses. It’s time to look after our water properly – by taking profit out of the equation.

BBC News reports that, according to the Environment Agency, ‘raw sewage was pumped into rivers and coasts around 375,000 times in 2021’. (Robert Brook / Getty Images)

The UK’s water system is in crisis. The latest example of the total failure of our privatised water system comes with reports of vast quantities of sewage being dumped in rivers and beaches. Many beaches on the south coast have been closed. More than forty in England and Wales have been hit with warnings against swimming due to pollution.

It comes as water companies claim that heavy rain overwhelmed sewage systems, but such pollution is not unusual. BBC News reports that, according to the Environment Agency, ‘raw sewage was pumped into rivers and coasts around 375,000 times in 2021’. Untreated sewage discharges have increased by 27 times over the last five years. Anglian Water—which covers Norfolk, Cambridgeshire, Essex, Lincolnshire, and other areas in the East—has been found to have the worst record. South West Water and Severn Trent Water were close behind.

During one of the hottest summers in the UK’s recorded history, how many people have been cooling off in the UK’s sewage ridden waters? Monitoring devices have been found to not be installed or not work around 90 percent of the time. Analysis by the Liberal Democrats suggests that around a quarter of discharges were not monitored last year. The scale of failing monitors means a major deficit in reporting on sewage discharges. Very many people have swum in human waste without being informed of it.

This is a disaster for both human health and the environment. There have been reports of swimmers becoming sick, including with serious bacterial infections. The risks of swimming in sewage and wastewater include ‘stomach, chest, ear, eye infections, e-coli, salmonella and even hepatitis A’. With fish dying after sewage discharges, water companies are exacerbating the severe public health and biodiversity crises we are already experiencing.

The situation is getting worse rather than better. The government currently aims to limit discharges into bathing waters by 70 percent by 2035, but this month has delayed the anticipated release of a new strategy including enforceable targets for water companies. In the context of government leniency, every single water company in England and Wales is currently failing to meet their targets. This will lead to millions of pounds of financial penalties, but they are clearly not sufficient to disincentivise the companies’ reckless activities.

The scandal of water companies’ sewage discharges is just one element of a broader water crisis in the UK. It a week after water companies were criticised over their response to droughts. A number of hosepipe bans have been introduced amid extreme heat across the country. These are measures putting the burden of water preservation on ordinary people while the companies themselves refuse to fix leaks which waste billions of litres a day.

This is indicative of chronic underinvestment by the privately owned companies. They argue that the latest round of sewage discharges was the result of especially heavy rainfall following a period of drought: ‘This week’s heavy rain has fallen on to dry ground that can’t absorb surface run-off, meaning that more rain than usual has overwhelmed our network.’ This may be true, but it is not a valid excuse for allowing the consequences to occur.

Like many other sectors, the UK’s water infrastructure is not prepared for ecological collapse. As climate change intensifies, the weather will become increasingly erratic. We will experience harsher and more frequent periods of drought followed by even more intense bouts of rainfall. It is the water companies’ responsibility to invest in infrastructure upgrades to adapt to these new climate conditions. Instead, shareholders pocket mega-profits while complaining that they too are victims of extreme weather.

All the while, consumers are made to pay extortionate fees to guarantee the continued profitability of the industry. When he was Shadow Chancellor, John McDonnell lamented that bills had risen by 50 percent since privatisation in 1989, while family incomes went down.

While consumers are ripped off and our waterways are polluted, water company bosses make a killing. On top of lucrative salaries, water company executives bonuses actually rose by 20 percent in 2021. They averaged £100,000 in one-off payments with £14.7 million paid overall in bonuses, benefits, and incentives. Many also earn tens of thousands more through second jobs as non-executive directors of other companies. For example, Yorkshire Water’s Nicola Shaw earns £115,000 on the board of International Airlines Group, and South West Water’s Susan Davy earns £53,000 on the board of a data management firm.

Water privatisation has been an irredeemable failure. The UK’s water system is now characterised by gross inequality, cynical profiteering, reckless polluting, and assaults on public health. The introduction of the profit motive into the running of a public utility has directly caused the current water crisis. The £72 billion paid to shareholders in dividends is urgently needed to save one of our most basic utilities. As McDonnell argued, shareholding has led not to greater accountability. Instead, it has produced unfettered financial parasitism.

Regulation of the system is failing too. The financial penalties on the table are too small to force the water companies to change. Mike Keil, senior director of policy at the Consumer Council for Water, has further argued that no financial penalty can be enough to repair for the damage of pollution caused to environments and people whose homes have been flooded with sewage. Some companies like Thames Water have recognised their inadequate performance, but the PR spin is not matched with appropriate levels of investment to upgrade infrastructure and meet their targets.

The only way to guarantee the necessary investment and keep bills down is to take the profit-motive out of the system by re-nationalising water in the UK. McDonnell promised as Shadow Chancellor explore the Welsh model of a not-for-profit organisation mandated to reinvest revenues into upgrading infrastructure and improving the quality of service. Just like the rest of Labour’s 2019 economic programme, this measure is immensely popular with the public. Polling commissioned by We Own It has shown that even 68 percent of Conservative voters support water nationalisation.

The water crisis is hardly the only failure of neoliberalism, though, and water nationalisation is only one step towards resolving the current stage of capitalist crisis. Energy prices are skyrocketing, inflation is spiking, wages are falling, and workers are taking strike action across our public services. Our low-wage, high-profit economic model is falling apart. The question is what comes next.

The need to nationalise water may be among the most starkly obvious, but it must form part of package of economic transformations, including bringing all key utilities into public ownership. Only then will we be able to democratically plan a rapid and fair response to the multiple crises we face.