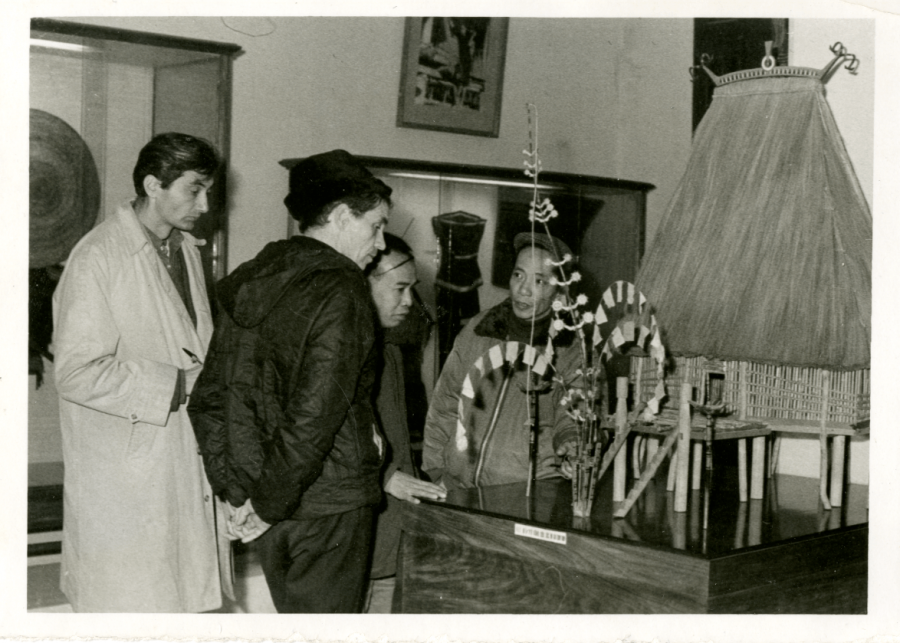 Today would have been Howard Zinn’s hundredth birthday. He is rightly remembered for works like A People’s History of the United States. But he was also an antiwar activist who went to North Vietnam in 1968 to accompany three captured US pilots back home.

A “rare act in the great madness of this war” was how forty-five-year-old historian Howard Zinn described North Vietnam’s decision to release three American pilots during the Tet Offensive. Standing beside Jesuit priest, poet, and anti-war activist Daniel Berrigan in front of a room full of US reporters, Zinn read from one of his notebooks and declared their recent trip to Hanoi a success. The two anti-war activists met with the North Vietnamese government in February 1968 and helped transport the three prisoners back to the United States.

The exchange was largely symbolic but was an extension of his radical internationalism and opposition to foreign wars. Reexamining his provocative trips behind enemy lines during the Vietnam War — on what would have been his hundredth birthday today — serves as a reminder that Zinn was both an incredibly productive progressive historian and a persistent critic of US empire.

Zinn was the rare left historian who infiltrated American popular culture. But he is still mostly known for debunking myths related to European colonialism and the nation’s founding.

After selling more than two million copies of A People History of the United States, his work appeared in film and TV productions like Good Will Hunting and The Sopranos. The latter included a teenage A. J. Soprano holding a copy of A People’s History while telling his parents that Christopher Columbus was a slave trader. More recently, Timothée Chalamet’s character in Lady Bird reads Zinn while smoking a cigarette.

For the last several decades, Zinn’s work has become a symbol of teenage rebellion, a source for young people who are beginning to question mainstream history.

In 2020, Donald Trump identified Zinn and the New York Times’s 1619 Project as “ideological poison” when he announced an executive to establish a “1776 commission.” Whether it’s Hollywood or a Republican president, Zinn’s work is primarily associated with the origins of the United States. But his opposition to US foreign policy, particularly during the Vietnam War, deserves more attention.

The notes Zinn kept during his first trip to Hanoi are now a part of his archive at the Tamiment Library and Robert F. Wagner Labor Archives at New York University. The collection contains several other notebooks from similar trips, including his second visit to Hanoi in 1972, during the final months of the US war in Vietnam. Zinn documents his lengthy conversations with North Vietnamese leaders and American POWs but also bears witness to the destruction wrought by US bombing raids. Taken together, the handwritten notes capture Zinn’s radical internationalism.

Notes on a Radical Internationalism

By 1968, Zinn had already developed a national reputation on the Left for his support of the Student Nonviolent Coordinating Committee (SNCC) in the South and his 1967 book on the Vietnam War, Vietnam: The Logic of Withdrawal. While teaching a seminar at Boston University, Zinn was interrupted by someone who told him that there was an urgent phone call from David Dellinger, a founder of the magazine Liberation and one of the leaders of the National Mobilization Committee to End the War in Vietnam.

Dellinger traveled to Hanoi in 1966 and had just received a message from the North Vietnamese government that it had decided to release three American pilots in conjunction with the Tet holiday. The telegram asked Dellinger to send “a responsible representative” to Hanoi to bring the three prisoners back to the United States. Zinn later joked, “Did Berrigan and I, both half-responsible, add up to what was wanted?”

Berrigan and Zinn met in New York with Dellinger and Students for a Democratic Society (SDS) leader Tom Hayden, another renowned peace activist who had helped facilitate the release of three US pilots the previous fall. The historian and the priest began their twenty-eight-hour trip from John F. Kennedy Airport to North Vietnam. The two rejected several offers from the State Department to stamp their passports and thereby legalize their visit.

“We didn’t want official approval for our trip from the government we were fiercely opposing for its actions in Vietnam,” Zinn recounted in his memoir.

While they were waiting in Thailand, a reporter asked Berrigan if they planned to push the North Vietnamese to release more Americans. “No, we are going there to make a gesture of mercy against the war, a symbolic gesture for all who are suffering on both sides, not just the Americans,” Berrigan said.

‘We are going [to Vietnam] to make a gesture of mercy against the war, a symbolic gesture for all who are suffering on both sides, not just the Americans.’

After a weeklong delay caused by the ongoing Tet Offensive, Zinn and Berrigan flew from Vientiane, Laos, to Hanoi on February 9, 1968. Zinn’s notebooks capture the trip’s logistical challenges and notes from their conversations with North Vietnamese leaders, including the Democratic Republic of Vietnam’s (DRV) prime minister Pham Van Dong and colonel Ha Van Lau. The prime minister encouraged Zinn to compare the treatment of prisoners in South Vietnam to their treatment of the US pilots and told the two peace activists, “We think alike: patriots, democrats, revolutionaries.”

Zinn described him as a man of “oceanic calm” and jotted down that the premier told them, “You are more American than anyone. We are more Vietnamese than anyone.”

Another page captures a part of their discussion with Colonel Lau: “The honesty” — Zinn underlined the word — “of the DRV is in its det[ermination] to fight US aggressors!” After a few days of relative peace, Zinn and Berrigan were rushed to a bomb shelter while US bombs dropped on Hanoi. Zinn, an Air Force pilot during World War II, was now on the other side of an American war.

Berrigan and Zinn eventually met Major Norris Overly, Captain John Black, and Lieutenant Junior Grade David Metheny in a French villa that the North Vietnamese had turned into a prison. The five men engaged in awkward but pleasant small talk and discussed the details of their plan to return home without the assistance of the US military. The pilots were released and returned to the United States, but the US intercepted them in Laos and transported them to a military plane.

While discussing his trip with American reporters, Zinn condemned the US government’s actions: “And here we must sadly report that the inept and cold-blooded handling of the release by the US government has dangerous implications for the future.” The movement’s efforts at radical diplomacy were at odds with the Lyndon B. Johnson administration’s presentation of the enemy. The historian later targeted the government’s insecurity over its PR strategy: “It was a fear of something as small as three very straight American airmen saying something slightly embarrassing to Washington.”

Zinn was surprised, but not shocked, to find out that Major Overly reported that the North Vietnamese had tortured him. Overly never mentioned torture to the anti-war activists, but Zinn never doubted his stories. Others within the anti-war movement warned Zinn to avoid an idealized view of the DRV. Historian Martin Duberman wrote in his biography Howard Zinn: A Life on the Left that “friends, even some of the radicals among them, cautioned him against sentimentality, insisting that the North Vietnamese must have had some political motive for the release.”

Part of Zinn’s summary of his 1968 trip to Hanoi, Vietnam, from his notebooks. (Michael Koncewicz)

Still, Zinn and Berrigan’s visit to Hanoi helped strengthen the relationship between the US anti-war activists and North Vietnam and a movement pressuring the Johnson administration to end the war.

“LBJ has asked for substantive act on the part of Hanoi to show a willingness to negotiate peace,” wrote Zinn in one of his notebooks. “Here it is. What in the world is he waiting for?”

A Witness to, and Participant in, a Movement to End a War

Zinn returned to Hanoi in the fall of 1972 as part of a delegation of anti-war activists who met with eleven US POWs to report on their living conditions and bring letters to their families. Sponsored by the People’s Coalition for Peace and Justice, the group arrived in Hanoi on November 4, three days before the 1972 election. The trip occurred just as President Richard Nixon’s peace negotiations with North Vietnam had reached a stalemate in the fall of 1972.

The trip did not lead to the release of additional prisoners, but the delegation provided reports on recent American bombings on the ground. Zinn and the rest of the group visited the rural community of Thuanh Thanh, thirty miles north of Hanoi. A US bombing raid had destroyed most of the village and killed twenty-two people, including twelve children.

Less than three months later, the US war in Vietnam was officially over. Sectarianism weakened the anti-war movement, but a coalition was still able to successfully lobby Congress to cut funds to the South Vietnamese government in 1974. By April 30, 1975, Saigon had fallen to the North Vietnamese Army, ending the war.

Zinn’s notebooks at the Tamiment Library at New York University remind us that anti-war activists were part of an international movement. They were determined to promote on-the-ground reports about the war to pressure the Johnson and Nixon administrations to end the war. As both a witness of the destruction caused by US bombs and a participant in the anti-war movement’s exchanges with the Vietnamese, Zinn offers readers a powerful snapshot of radical diplomacy in the middle of an unjust war.