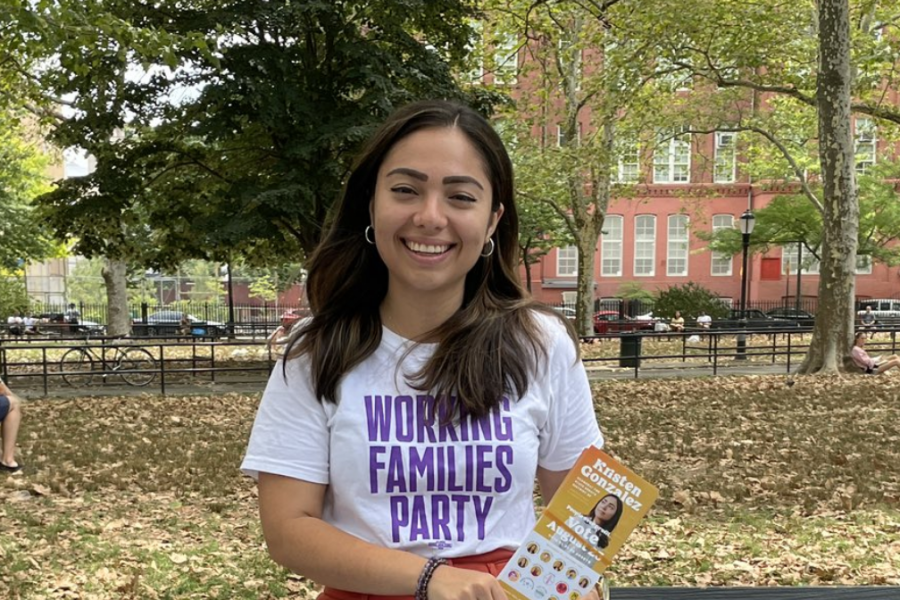 Kristen Gonzalez ran as part of the “For the Many” slate in New York State Senate District 59. (@Gonzalez4NY / Twitter)

Yesterday, the state of New York held primary elections for its state senate and congressional seats. For socialists, the news was mostly good.

Brisport and Gonzalez were both running as candidates on the “For the Many” slate, a group of thirteen candidates for the state legislature backed by NYC-DSA. (Most members of the slate were also backed by an array of other progressive organizations). Incumbent state senator Julia Salazar, also running on the slate, did not face a primary challenge this year. (Neither did AOC, NYC-DSA’s sole endorsed representative in Congress.)

While the news wasn’t all good for socialists — DSA-endorsed challenger David Alexis lost his race in Brooklyn — the overall news of the night was a boon for the Left. Despite the Democratic establishment’s attempt to defeat leftist challenges to centrist incumbents and trying to take out a socialist incumbent, NYC-DSA and allies are defending and building on earlier victories.

A Socialist Stronghold in Queens

The best news of the night for DSA members and fellow travelers (like WFP and NYCC) came out of State Senate District 59, which includes Astoria and Long Island City in Queens; Greenpoint and part of Williamsburg in Brooklyn; and Kips Bay, Murray Hill, Gramercy, and StuyTown in Manhattan. There, Gonzalez prevailed against opponent Elizabeth Crowley, dealing another blow to that family’s powerful Democratic dynasty.

Like many other DSA candidates, Gonzalez also faced down an onslaught of attack ads funded by real estate interests, no doubt in response to Gonzalez’s support of stronger tenant protections and her opposition to a proposed new tax break for developers. In what’s become a trend for those seeking to undermine socialists and progressives, the attacks tried to paint Gonzalez as weak on crime and public safety.

Beating an establishment candidate backed by hundreds of thousands in real estate money is enough of a feat on its own. But Gonzalez beat Crowley by 15 percentage points. While running up huge margins in the Queens and Brooklyn sections of the district, Gonzalez nearly fought her opponent to a draw in the wealthier Manhattan neighborhoods as well, getting 38 percent to Crowley’s 42 percent.

Once Gonzalez’s victory was clear, DSA members pointed out that Queens now boasts democratic socialist legislators in Congress (AOC), city council (Tiffany Cabán), state assembly (Zohran Kwame Mamdani), and now state senate. Residents of one part of Astoria will be represented by all of them. Politico New York reporter Bill Mahoney pointed out that the only places in American history to “have had socialist representation in Congress, both houses of the state Legislature, and the city council at the same time” are Milwaukee in 1913 and Astoria in 2023.

A complete list of places in American history that have had socialist representation in Congress, both houses of the state Legislature, and the city council at the same time:
Milwaukee in 1913
Astoria in 2023

Victory and Defeat in Brooklyn

News for democratic socialists farther south in Brooklyn was mixed.

Brisport also handily defeated Reverend Conrad Tillard, who Mayor Eric Adams endorsed. Tillard, a Nation of Islam member turned Christian pastor with a checkered past, won only 15 percent of the vote despite the mayor’s endorsement.

Parker received plenty of financial support from fossil fuel and real estate interests as well as charter school backers. And unlike in Queens or other parts of Brooklyn, DSA has less of an established activist base in the district.

Still, Alexis came within striking distance. As Ross Barkan noted in New York Magazine, it’s possible that Mays-Williams split the progressive vote — had she not run, Alexis might very well have beat Parker. She seemed to play a kind of Elizabeth Warren role in the race, insisting on running as a progressive against Alexis’s more robustly leftist politics but with a much smaller base and the backing of only a few progressive nonprofit groups — functioning, in the end, as a spoiler to a left challenge to a corrupt, pro-corporate centrist Democrat.

As the polls closed Tuesday night, Alexis said on Twitter: “Regardless of the results, I’m so honored to have worked with everyone in this movement. We did something amazing in this campaign: build a working-class coalition in Flatbush.” That coalition could give democratic socialists a better shot at victory in the district in the future.

The For the Many slate’s victories yesterday add to earlier wins in June, when all four of DSA’s incumbent state assemblymembers won their primaries, along with challenger Sarahana Shrestha from the Hudson Valley, who beat twenty-three-year incumbent Kevin Cahill.

Since all the victorious DSA-backed candidates won Democratic primaries in solidly blue districts, they are all but assured of victory in November’s general election. That means there will now be three socialists in the state senate and five in the state assembly. Gonzalez and Shrestha can now join the Socialists in Office committee, which coordinates strategy and priorities among the democratic socialist cohort in Albany and between the legislators and NYC-DSA.

How socialists can further advance their agenda in Albany is still an open question. Despite their gains, democratic socialists remain a small minority in both assemblies, and they were unable to push through most of their policy priorities in the latest legislative cycle. Socialists and fellow travelers must figure out how to mobilize and organize a broader working-class base to challenge corporate power.

But continued growth of the socialist bloc in the legislature — and the increasing ability to pose credible primary threats to less progressive politicians — is certainly necessary too. On that front, yesterday’s results are a promising step forward.