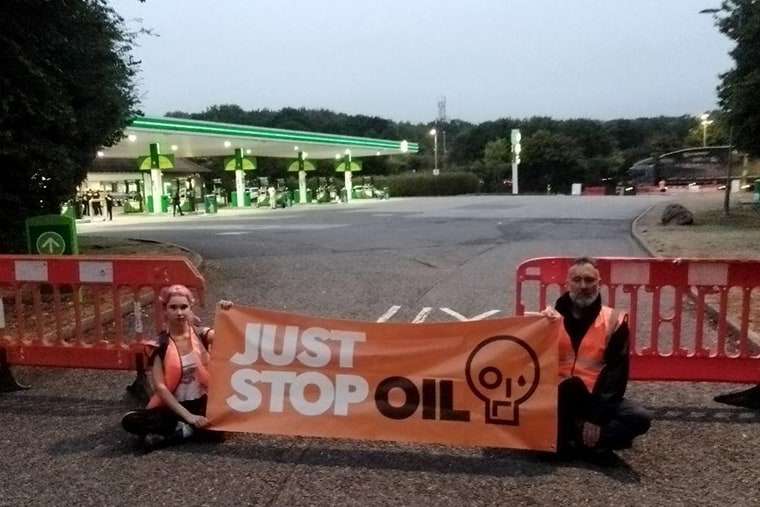 Climate group Just Stop Oil took a stand against the fossil fuel industry this week, but the police moved to repress their actions.

The cops made over 60 arrests on Tuesday and Wednesday, and the group said the police are also using dangerous tactics that endanger the lives of activists.

In a series of actions, the group blocked three service stations on the M25, including the Cobham services in Surrey, Clacket Lane services in Kent and Thurrock services in Essex.

The group blocked all access to petrol pumps by breaking their display glass, spray painting on them, or “locking on” to the pumps. Just Stop Oil succeeded in shutting down the Cobham and Clacket Lane services.

Activists have also constructed four tunnels to cut off oil tanker routes. They built two in Essex and another two in Warwickshire.

The tunnels, which make the roads above unsafe for heavy traffic, stopped oil and petrol supplies from leaving the Navigator and Grays depots in Essex and the Kingsbury depot in Warwickshire on Tuesday.

Construction worker Sam was on Wednesday occupying a tunnel underneath a road that leads to the Navigator Oil terminal in Thurrock. Sam said, “We will remain in the tunnel because of the government’s continued failure to act on the climate emergency.

“The international energy agency has stated very clearly that any governments that are serious about the climate emergency need to have no new future investments in fossil fuels. This is also the demand of Just Stop Oil.”

On Tuesday the police decided to reopen the road over the tunnels, endangering the lives of all those inside.

Scientist Dr Larch Maxey, also occupying a tunnel in Essex, said, “The police are following the government’s line and prioritising the flow of oil above the lives of every single person on Earth. They should know that we will not give up easily.  We will not stop until the government agrees to end new oil and gas projects in Britain.”

Joy Corrigan also joined protests and said, “I am sick with worry about how today’s children will survive. Every day I see more and more examples of climate change, and the frequency is accelerating. Government get your bloody finger out. We need action today not tomorrow.”

Just Stop Oil is right to use tactics such as blocking roads to draw attention to the urgent need for action. Socialists, trade unionists and campaigners should back the group’s occupation of Westminster from 1 October. Extinction Rebellion also launches its next major event on 10 September.