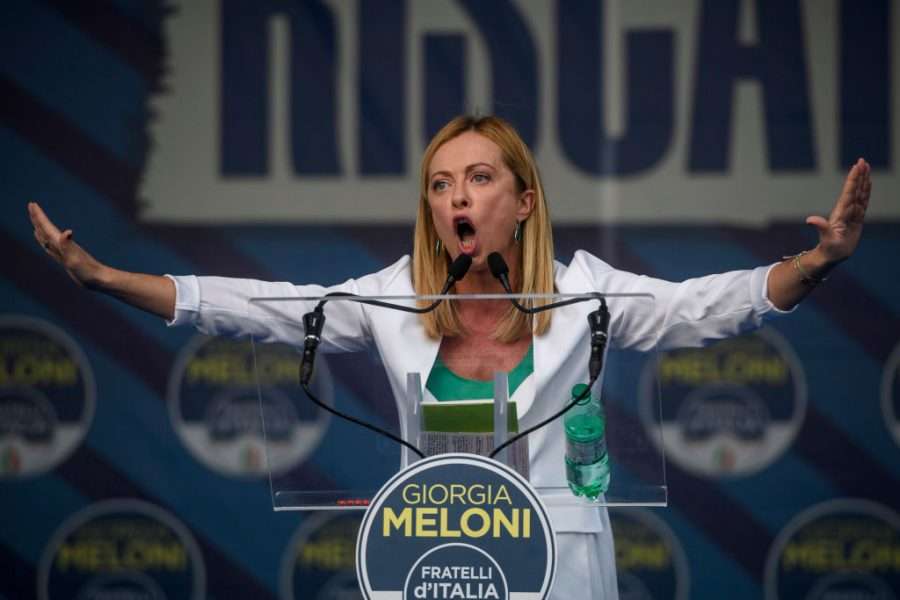 Giorgia Meloni’s far-right party is on course to victory in next month’s Italian election. She’s benefiting from indulgent media — and the center left’s failure to explain how it can break Italy out of its long stagnation.

Fratelli d’Italia Leader Giorgia Meloni attends a political meeting organized by the party as part of the electoral campaign for mayor of Rome, at Piazza del Popolo, on September 18, 2021, in Rome, Italy. (Antonio Masiello / Getty Images)

Ahead of the September 25 general election, the coalition that Italian media calls “center right” is close to 50 percent in the polls — and near guaranteed a large majority in Parliament. Worse news comes when we realize that the phrase “center right” is a euphemism. Both the main party in the alliance — Giorgia Meloni’s postfascist Fratelli d’Italia (polling around 24 percent), and its second force, Matteo Salvini’s Lega (on around 14 percent), combine their plans for sweeping tax cuts with a stream of hateful propaganda against immigrants, LGBTQ “lobbies,” “plans for ethnic replacement,” and such like.

Fratelli d’Italia is not guaranteed to be the most popular party. It is neck-and-neck in polls with the center-left Democrats, though this latter is in a much weaker position in terms of converting votes into seats, given its lack of major allies. The Democrats insist that they will continue the work of Mario Draghi’s cross-party government, created last February to disburse European recovery funds. Former European central banker Draghi’s majority had also relied on Silvio Berlusconi’s Forza Italia, the Lega, and the eclectic Five Star Movement; but with these latter forces pulling their support this July, the Democrats alone uphold its record.

This has, in turn, recreated a typical optical illusion of Italian politics, in which the latest wave of right-wing insurgents claim that they are overcoming an ever-hegemonic Left, even though Italy has almost no Left of which to speak. Draghi’s cabinet was the latest of a series of grand coalitions and “technical governments” in recent decades, backed among others by the Democrats, determined guarantors of institutional stability. But given the basic declinist-neoliberal substrate of all Italian politics, the 2022 campaign is again fought between this neoliberal-managerial center left and far-right outsiders who claim they will put an end to “a decade of left-wing rule.”

Amid the ongoing turbulence in the party system, standing outside of Draghi’s government surely has helped Fratelli d’Italia rake up right-wing voters. It scored only 4 percent in 2018, and around half of its current support is made up of only recent transfers from the Lega, which had itself surged to prominence in 2018–19 during Salvini’s spell as interior minister. Yet the pact among the other main parties since February 2021 gave Meloni space to monopolize the role of critic and in so doing to emphasize its “constructive” approach, hostile to the “left in power” but not to Draghi per se. Fratelli d’Italia also routinely emphasizes its loyalty to the European Union, NATO, and arms supplies to Ukraine, as a show of its “Atlanticist” credentials.

Some parts of the center right were unhappy at the end to Draghi’s government. The early days of the campaign saw the Democrats fawn over figures like Renato Brunetta, a long-standing Berlusconi ally who quit his Forza Italia party in response. Rather like Democrats in the United States looking for moderate, “never-Trump” Republicans, a certain center-left mentality consists of trying to find the responsible right-wingers who serve as interlocutors, even if that means figures (notably Berlusconi) who had previously stood as the “evil” that a “lesser-evil” vote was meant to stop in his tracks. The only problem is that over time, the evils keep getting worse.

Digging Up the Past

Much Italian media is intolerant of efforts to “demonise” Meloni. “Can’t we have two months without talking about history?” pundit Paolo Mieli asked at the beginning of the campaign. Despite Mieli’s comments, no one had actually claimed that Fratelli d’Italia plans a “March on Rome” to crown the centenary of Benito Mussolini’s October 1922 rise to power. In fact, even Democratic leader Enrico Letta has entertained cordial relations with Meloni in recent years. Yet clearly there is something unusual about an aspirant prime minister that needs to insist that her party’s “nostalgics” — a euphemism for the officials using the symbols and banners of the Nazi-collaborationist Salò Republic — are “traitors to the cause.”

While Mieli, a former student of famous Mussolini biographer Renzo de Felice, is the author of multiple books on twentieth-century Italy, his call to stop talking about history has been taken up by broad swaths of national media, which often shows a remarkable amnesia even about the most recent past. Fratelli d’Italia, an heir to the neofascist Movimento Sociale Italiano (MSI) created in 1946, routinely dismisses exposés into its officials’ racism, praise for fascism, and ties to more militant groups, terming this all a matter of “muckraking.” This is backed by a chorus of journalists from right-wing dailies who insist that since “fascism is not returning” — and literally, of course, it is not — this is all a dead issue.

There are some signs of candidates’ pasts coming back to haunt them, though not on the postfascist wing of Italian politics. Raffaele La Regina, a Democratic candidate in the southern region of Basilicata, this weekend had to withdraw from the race after revelations that in 2020 he had questioned Israel’s right to exist. Leading dailies such as Il Corriere and La Repubblica rather quaintly noted that politicians’ past social media posts are today becoming a tool of electoral propaganda. Even so, this depends on whether they even can be shamed; and Meloni’s repeated past claims that the “usurer” George Soros, a Hungarian Jew, is “financing a plan to ethnically substitute Europeans” have yet to trouble the present campaign.

The real threat Fratelli d’Italia poses, should it establish itself in government, is much less a “return to fascism” than the kind of norm erosion and official vilification of critics and minorities typical of such countries as Poland and Hungary. In fact, even more than Hungary, the Polish right is the model for Meloni’s party, and one which seems to have gained renewed legitimacy within EU ruling circles since the Russian invasion of Ukraine. Meloni has in the past praised Vladimir Putin but is broadly more committed to “Atlanticist” positions than the Lega, notwithstanding the fact that her party is closer to the Conservative Political Action Conference (CPAC) and the Trumpian wing of the Republicans than to the incumbent administration in Washington.

While there is no chance of Meloni seeking a break with the euro or the European Union, there are two main ways in which an administration led by her could impose lasting damage. One lies in the call for a naval blockade against migrant boats, a piece of grandstanding which is not just illegal but also likely to kill hundreds and thousands of human beings. Another lies in various plans to rewrite the Italian constitution to include vague, catch-all means of clamping down on left-wing critics, for instance by criminalizing “apologia for communism” or for “Islamic totalitarianism.” Beyond this reversal of the Constitution’s current (rarely enforced) anti-fascist “prejudice” lies the plan to turn Italy into a presidentialist republic, replacing the current parliamentary system with a top-heavy executive.

Talk About the Issues!

Given her dominant polling lead, Meloni’s campaign has been rather low key, in fact almost entirely focused on replying to left-wing accusations that she is linked to fascism. Indicative of the seriousness with which these issues are discussed in Italy was a video she released to international media  —a statement to camera, without questions from reporters — in which she insisted that fascism was already “consigned to history” and denounced the “anti-Jewish laws of 1938” and “dictatorship.” This choice of words, less full-throatedly critical of the past even than historic MSI leader Gianfranco Fini in the 1990s–2000s, is evidently designed to avoid condemning the (neo)fascist tradition per se. She insists that the Left talks about history because it has nothing to say about programs for government.

In fact, in both main camps, real proposals for the next five years are sorely lacking. The Democrats’ search for largely mythical centrist votes (and the rabble of small neoliberal parties claiming to represent this “third pole”) are also an epiphenomenon of this problem. While Fratelli d’Italia reassembles the right-wing electorate under a new leadership, the center left instead seems paralyzed, able only to entrench itself in the defense of an economic model that has seen Italian growth flatline since the late 1990s while managing some of the effects through temporary subsidies and relief measures. This is not just a matter of eurozone membership, which no major political forces challenge, but is bound up with it, insofar as governments are trapped in a cycle of low investment, poor productivity gains, crushing public debt, and structurally low employment levels.

This is not to entertain the idea that Meloni is really interested in talking about the economy. The “center-right” proposals signal a general cut in taxation and bureaucracy, though more such encumbrances are to be placed on businesses run by non-EU citizens, imagined to be alone responsible for Italy’s gaping hole of tax evasion. Fratelli d’Italia’s proposal for boosting employment — tax cuts for (Italian-run) companies who take on extra staff — is a mere sticking plaster for structural economic weaknesses, and surely unable to fill in for the jobseekers’ allowance it proposes to scrap. Within the right-wing coalition, the Lega’s proposal for a 15 percent flat tax rate — perhaps blowing an €80 billion hole in the public accounts — is so outlandish as to make us wonder why the party does not propose a 10 or 5 percent rate instead. The candidacy, in the Fratelli d’Italia lists, of recidivist Berlusconi-era finance minister Giulio Tremonti, is clearly intended to signal a lack of dramatic economic policy measures.

There are forces more or less to the left of the Democrats who are trying to insert social policy into the campaign. One, if rather quixotically, is Giuseppe Conte’s Five Star Movement; after beginning the last parliament as a weak ally to Salvini’s Lega, it has made the defense of the jobseekers’ allowance introduced in 2019 (misnamed “citizens’ income”) its flagship policy. It will likely score in the region of 10 percent of the vote, far down from its 32 percent in 2018, after both its meandering political course and the departure of former leader Luigi di Maio. As well as green-left forces allied to the Democrats (notably in the candidacy of Ivory Coast–born farmworkers organizer Aboubakar Soumahoro), there is an independent left in the form of the Unione Popolare, led by former Naples mayor Luigi de Magistris. Formed shortly before the elections, which had been expected to take place next spring, this list however seems unlikely to make it into Parliament.

Observing Italian politics, it is often tempting to conclude that beyond the intense rhetorical polarization and the recurrence of historical symbolism, the real alternatives are rather less dramatic. Indeed, the Italian economic malaise is chronic rather than reducible to a singular moment of crisis: citizens’ declining adherence to the parties dates back for over three decades, and we are not about to see a dramatic turnaround. Yet the current moment surely does bring new dangers, with the breakthrough of a party many of whose leaders are open advocates of white-nationalist conspiracy theories and defenders of fascist war criminals. Releasing a video of a woman allegedly being raped by an immigrant on Sunday, Meloni told us a lot about who she really is. The hope that we will not see her in power looks slim.