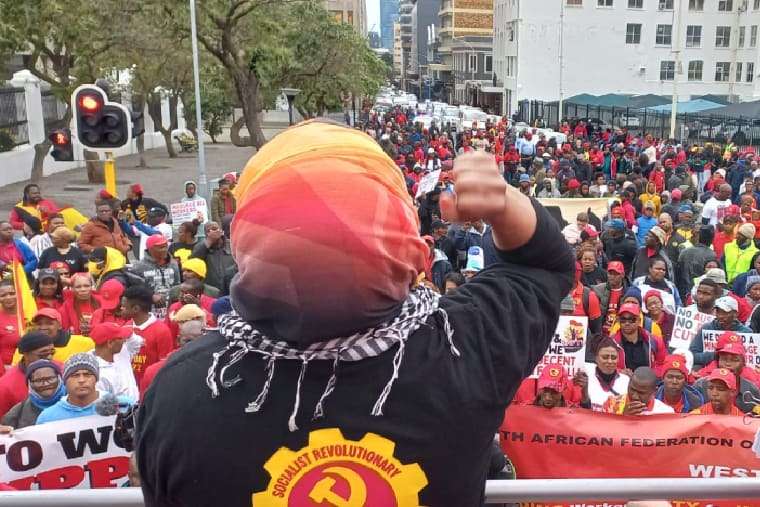 A shutdown led by trade unions in South Africa was major success on Wednesday. It showed that after a long Covid slumber, the working class and its allies are on the move again.

For all the nerves that were had by all who were organising the shutdown, the turnout and militancy of union activists, supported by community organisations, surpassed all expectations. We have waited a long time to experience this show of force by workers.

Coordinated marches took place in 11 major cities. The largest was in Tshwane (Pretoria) where some 10,000 marched through the city centre to hand over demands to government and listen to speeches by union leadership and supporting organisations.

Cosatu, founded in 1985, is the historic federation and linked to the ruling African National Congress (ANC). Saftu broke from Cosatu in 2017 over the ANC links and other issues.

But this year it has stressed the need for joint action. In May its congress declared, “We are moving beyond divisiveness in favour of principled unity and recommit to building a fighting trade union movement guided by Marxism.”

“We declare that we must seek to work together, in solidarity, with other trade union federations, unions, and other worker-oriented organisations to protect workers against consistent and unrelenting attacks from capitalists and their system. We need unity in action not just simply declared.”

Other organisations backing the shutdown included the Treatment Action Campaign, the Abahlali baseMjondolo shack dwellers’ movement, the Kopanang Africa Against Xenophobia campaign and the #PaytheGrants campaign.

It is no wonder that working people are starting to stand up again. The assaults by companies and government making use of the Covid pandemic, have been devastating.

Bosses and government destroyed some 3 million jobs. The lowest paid were hit hardest, with women bearing the brunt. Gender based violence and crime have reached terrifying levels. Youth unemployment is nearing 60 percent.

Food price inflation will soon move past its present 8 percent officially as companies cash in on the crisis to increase their profits. Many people are cutting down on regular daily meals. Transport and fuel prices have rocketed.

If this is not enough, electricity cut-offs, especially around supper time, have made life very difficult. These flow from a lack of a planned system and grossly inadequate investment in a sustainable system to supply power for all.

The effects of climate change are also clearer than ever. A recent “rain bomb”—a deluge causing catastrophic floods—in Kwazulu-Natal saw some 430 people lose their lives, buried in mud.

Union leaders came out strongly on Wednesday, feeling the awaking militancy of their members. Zwelinzima Vavi, previously Cosatu general secretary and now general secretary of Saftu, lambasted government for its corruption, ineptitude and bringing the public services that working people rely on into total disarray.

Postal workers, for example, sit in sorting centres without either heating or air conditioning, low lighting and disgusting toilets facilities.

The government is reneging on past wage increases to public servants.

Vavi also condemned the rise of scapegoating in the form of xenophobia and sexism and highlighted the spectre of climate change.

The shutdown was a sign of the potential for increased resistance. Now it has to lead to more strikes, more mass protests and a stronger socialist alternative to the ANC.