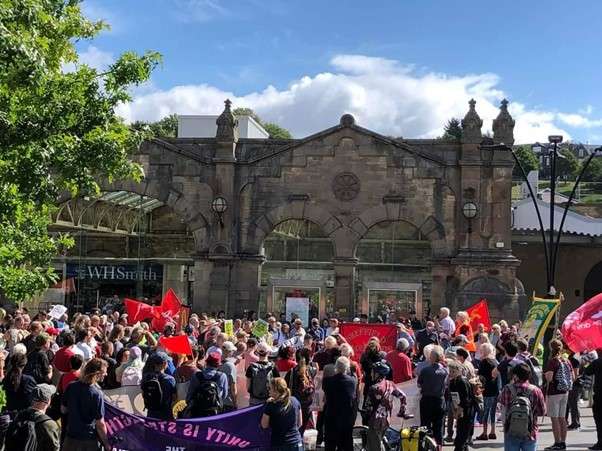 Last Saturday, 20 August, over 300 people gathered for a march and rally called by the TUCs of Sheffield, Barnsley, Rotherham and Chesterfield, alongside the RMT, TSSA and CWU. Shannon Gibson reports.

Coinciding with the second day of rail strike action on 18 and 20 August, the rally drew wide support from workers in ASLEF, Unison, Napo, PCS, NUJ and Unite. They were joined by community groups such as the Orgreave Truth and Justice Campaign, Barnsley Better Buses, anti-racist, migrant solidarity, enviromental campaigns and a local Labour councillor.

Protesters joined the pickets during the morning, with tea and coffee laid on by Sheffield Trades Council. Organisers arranged for a giant poster at the front of the demonstration, where participants were invited to write messages of solidarity, and which was later taken to the picket and hung alongside trade union banners.

ASLEF member Joe Howard told the crowd, ‘All the different banners here, and different people representing different organisations, show that there is a united strength out there against austerity and these cuts. This is not about individual disputes – this is about workers in this country getting a fair deal. We’ve got to have these shows of strength’. CWU union members from BT and Royal Mail spoke about their ongoing disputes, along with speakers from many other union branches and campaigns.

Holly Johnston from Sheffield NHS Workers Say No expressed her solidarity and spoke about workers at St Georges Hospital in London, who had joined RMT picket lines after RMT members had joined St Georges pickets in their ongoing dispute. Holly said ‘this is the type of solidarity we need to see, and we need to fight to bring all outsourced workers back in-house. As the RMT fight for nationalisation of the railways, we in the NHS should fight for renationalisation, and to kick the privatisers out’.

On NHS pay, Holly said, ‘NHS workers have had imposed on them another pay cut of around 4% this year, and have lost up to 29% in their wages in the last 12 years. This is a deliberate and a political move to dismantle the NHS. We need to vote “no” to the pay award, and “yes” to strike.’

The crowd then assembled for the march. Led by the RMT and TSSA, it gained support from passers by who clapped, praised the strikers and pipped their horns. Buoyed by the support in town, marchers joined in lively chants of ‘The Workers United Will Never Be Defeated’, ‘What Do We Want – Pay Justice!’, and ‘1-2, 1-2-3, Victory to the RMT!’

RMT regional organiser Gaz Jackson addressed the march back at the railway station, speaking alongside representatives from the TSSA. He said his members were on their sixth day of action and were overwhelmed by the support on show. He called everyone friends who had turned up to show support and march with the RMT. He added that the strike would go as far as was necessary to win, including re-balloting in November.

Jackson also sounded a note of caution, reminding the crowd of what may lie ahead for the strike, and the importance of continued solidarity: ‘What I would say is, we need support, we need support through the winter, we need solidarity, not your sympathy. We need the people to get behind these strikes because if it happens to us, it’s coming to you as well.’