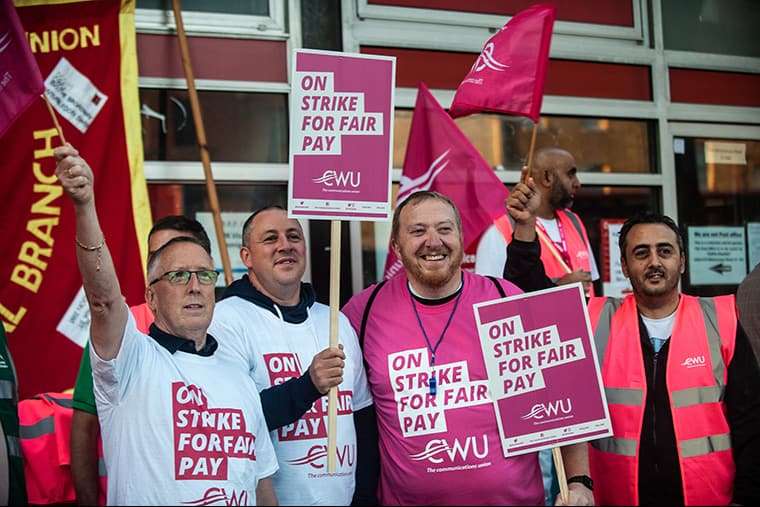 Postal workers shut down nearly the whole of Royal Mail on Friday, with their first national strike in 12 years.

The strike comes after bosses forced a meagre increase of just 2 percent—a huge real-terms pay cut—on all their workers, while raking in profits and awarding themselves big bonuses.

Workers—members of the CWU union—responded with a solid strike and big turnouts on the picket lines.

One of the biggest was at Whitechapel delivery office in east London—one of the “hubs” where bosses are trying to run a scabbing operation.

“People are out today because the imposed pay increase of 2 percent is totally unacceptable,” Vinnie Micallef, East London Postal branch secretary told Socialist Worker. “The bosses have rewarded themselves gold plated salaries and bonuses, and shareholders have been given over £400 million in dividends, and then they impose a 2 percent pay increase on the workforce.

“They have made a conscious decision to reward themselves and shareholders and their workforce and we’re not going to accept it.”

“The managers have been offered a £1,000 bonus if they don’t go sick between now and 31 October,” another striker at Whitechapel added. “What that tells you is if they cross picket lines and work during this strike they get a £1,000 bonus.

“That doesn’t sound like a company that can’t afford it does it? We worked through the whole of the pandemic—that was two years putting our lives on the line, and they only gave us £200 bonus.”

He added, “If we don’t come out on strike then we’re just going to end up with nothing. That’s why we’re here. We just want fair pay.”

The strike in Royal Mail has been a long time coming. For years top bosses have tried to push through attacks on their workers as part of a goal of transforming Royal Mail into a parcels company similar to other private courier companies.

Chief executive Simon Thompson wanted to tie a slightly bigger increase of some 5 percent—still a pay cut—to changes to terms and conditions.

There were many big picket lines across Britain such as this one in Newark, Nottinghamshire (Picture: Richard Buckwell)

In a separate but concurrent dispute, CWU members also voted to strike to defend their terms and conditions, though Friday’s strike is officially just over pay.

Eddy, the CWU rep at Bethnal Green delivery office in east London, told Socialist Worker, “For us, a 2 percent pay increase is £11 a week. But factor in tax and national insurance and it’s £3 a week. And they call that a pay rise. Anything else and they want us to negotiate away terms and conditions.”

“Things have come to a head now and we’ve no alternative but to strike. There’s nothing else we can do—that’s our power and we’re going to use it.”

Strikers know their action has hit hard. Bosses’ scabbing operation—a skeleton service run by managers from a few “hubs”—seems to have floundered. “We know they’re trying to run special deliveries out of Whitechapel, but it seems they messed up distribution and that work is still sitting downstairs here. From what I can see, those managers did not take that work out.

“They seem to be under the impression they can do the work without us. But the fact of the matter is, we know what we’re doing. If that had been us, we’d have made sure that work was on the van and going to where it was supposed to go. They can’t even manage that.”

“They seem to be under the impression they can do the work without us. But the fact of the matter is, we know what we’re doing. If that had been us, we’d have made sure that work was on the van and going to where it was supposed to go. They can’t even manage that.”

He added that the knock-on effect of the strike will mean days of disruption to come, with another strike set for Wednesday of next week, and two more days on 8 and 9 September.

It’s made even more powerful by the fact that Post Office workers, also in the CWU, also struck over pay on Friday, and are set to strike again on Saturday and Tuesday.

Royal Mail workers will also be joined on strike next Wednesday by CWU members working for BT, in their own similar pay fight. That means, on Wednesday of next week, more than 150,000 people are set to strike together over pay.

Together, they take on a much bigger significance as part of a growing revolt over wages in every union and industry.

“I speak to loads of people and even people who aren’t un unions are just angered at this government and the way it behaves,” said Lee. “I’m not a militant, but I think working people in this country have been treated badly for too long and we’ve just about had enough. We’ve got to make a stand and this is the only hand we’ve got to play.”

For Royal Mail strike pictures from across Britain, go here