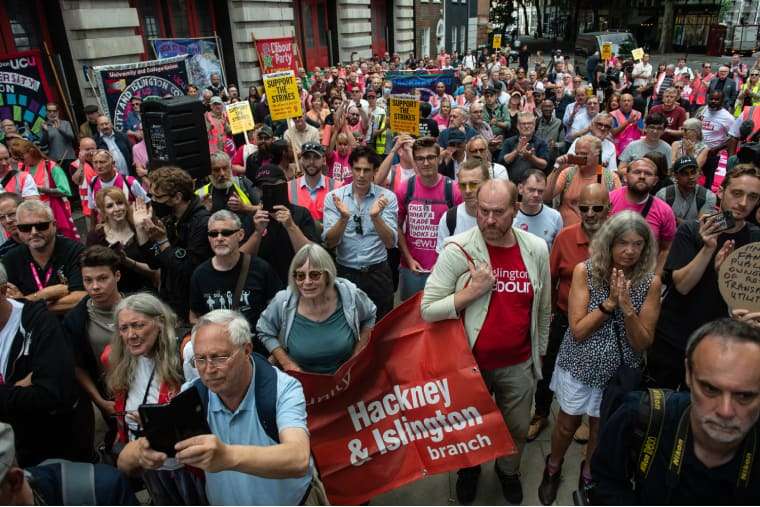 Striking Royal Mail workers in London rounded off their first day of action with a rally outside the Mount Pleasant mail centre, where bosses also have their HQ.

The rally was a call for unity and solidarity in the fight over pay—but also a message that strikers are ready for a long and bitter battle.

Strikers at the rally said the day has gone well. Nathan, a CWU union rep for west central deliveries at Mount Pleasant, told Socialist Worker, “The strike was brilliant, completely solid. We’ve been picketing this entrance since 6 this morning and no one’s gone past us.

“We saw a couple of vans going out and managers in but I don’t expect them to be delivering much.”

He added, There’s a strength of feeling at the minute—we’re in the right, we deserve a pay increase. It’s not just CWU members. A few years back if you told someone you’d been on strike there’d be a negative feeling, the media would portray it very negatively. But it feels to me like the tide’s changing a little bit.”

And Liam, who had been on the picket line at the north London delivery centre, told Socialist Worker it was his first time out on strike. “We had a pretty good turnout on the picket line—about 40 people turned up,” he said.

Speakers at the rally told strikers to gear up for more action. London divisional rep Mark Dolan, who chaired the rally, said, “We’ve seen from social media that there’s picket lines up and down the county.

“This is just the first day. We’ve got to make sure we look like this in the next few weeks as well.”

CWU general secretary Dave Ward spoke alongside leaders of the UCU and RMT unions Jo Grady and Mick Lynch. They talked of the need for solidarity and coordination between workers fighting over pay.

UCU general secretary Grady thanked CWU members for solidarity during university workers’ strikes. “You made sure that no university got a single piece of mail when there was a strike day,” she said.

And RMT general secretary Lynch called for other trade unions to join the fight over pay. “We’ve got to have a wave of industrial action across the UK,” he said. “We’re not going to win it this weekend,” he added. “We’ve got to stick in.

“We’re not going away until we get a settlement for our members. The rest of the unions have got to be with us.”

Ward echoed him with the same message. He pointed to the fact that workers in Post Office also struck today in their long running battle over pay. And on Wednesday of next week, some 155,000 CWU members in Royal Mail and BT are set to strike together.

Both sets of workers are fighting after bosses imposed miniscule pay increases—real-terms pay cuts—on them. “Virtually all members of the CWU, who are in pretty much the same dispute with different employers, will all be on strike together,” he said.

He added, “When we say we’re in it for the long haul, Royal Mail, you’d better believe it.”

If the fight over pay is going to be a long and bitter one, then union leaders need a plan of action to match it. For Lynch and the Network Rail dispute, that means announcing more strike dates—with more frequent and longer action to hit even harder.

And it means being prepared to do the same in Royal Mail. Antony Frederick, another CWU rep at Mount Pleasant, told Socialist Worker, “We can’t afford a pay decrease in the current climate. With the announcement today of utility bills going up, and who knows what the announcement in October will be like. It’s not going to get any better.

“Royal Mail have to give us a pay offer we can work with. But their mindset is one of belligerence at the moment—hence why it’s going to be a long one.

“There are various strategies they can do—we don’t all have to take the same day, we can have staggered days, there’s various ways of doing things. But to down tools is the one way we can voice our opinion.”

And Liam said, “I think this will probably go on into Christmas. I’m ready for that and I don’t see anyone backing down. I think we’ve got a battle on our hands and I think everyone’s ready to get behind the union.”

There need to be united strikes and escalating action.

For more pictures of the rally go here