Home / News / Why the Philippine Elite Continues to Back US Empire 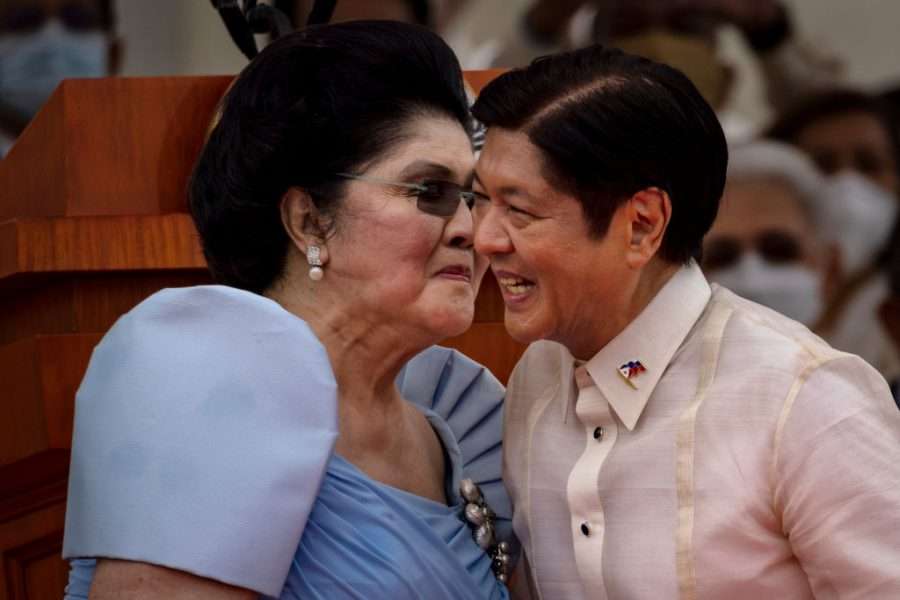 Amid rising tensions in the Southeast Asian Sea, both the US and China are courting the Philippines. Most Filipinos would prefer a nonaligned foreign policy — but Manila’s elites keep lining up with the US, further threatening regional peace and stability.

Ferdinand “Bongbong” Marcos Jr, together with his mother, former first lady Imelda Marcos, pose for pictures with their family after taking his oath as the incoming president at the National Museum of Fine Arts on June 30, 2022, in Manila, the Philippines. (Ezra Acayan / Getty Images)

Amid increasing tensions in the Southeast Asian Sea (also known as the South China Sea), the Philippines is being courted by both China and the United States. China’s foreign minister Wang Yi visited Manila in early July and promised to usher in “a golden era” of relations between the two countries. But the meeting seems to have done little to sway the new president. In his first State of the Nation Address, President Ferdinand Marcos Jr made allusions to territorial disputes with China and swore he would not “abandon even a square inch of territory . . . to any foreign power.”

The US secretary of state Antony Blinken met with Marcos Jr in early August and declared the Philippines to be “an irreplaceable friend” and promised military support in the event of a conflict. During Blinken’s trip, Marcos Jr dismissed the fallout from House Speaker Nancy Pelosi’s recent visit to Taiwan as just a demonstration of the region’s volatility and “how the intensity of that conflict has been.”

When Marcos Jr was elected, pundits surmised that the Chinese government would be pleased, given his father’s friendlier attitude to its larger neighbor. So far this has not been entirely borne out. So what lies behind the Philippines’ steadfast commitment to its relationship with the United States?

Together with its neighbors in the Association of Southeast Asian Nations (ASEAN), the Philippines now finds itself confronted by the aggressive geostrategic thrusts of the world’s top two hegemonic great powers — the United States and China. The former’s foreign policy remains forcefully bellicose toward the latter. The United States views China as an ascendant strategic disruptor of the capitalist global order, which US imperialism continues to enforce after nearly eight decades. Caught in the middle of a mounting strategic competition between Washington and Beijing, Manila is pressed to firmly align with either camp.

But as the Philippines grapples with this, it is also threatened by a menacing global environment, with only more turbulence and instability ahead. An unprecedented and global structural crisis — ranging from ­the COVID-19 pandemic to comprehensive disruptions of international capital flows, the climate change emergency, and spiraling conflicts among the imperialist powers — is destabilizing the global order, posing a particular dilemma for the Philippines.

The Philippines now finds itself confronted by the aggressive geostrategic thrusts of the world’s top two hegemonic great powers — the United States and China.

The Philippines occupies a highly strategic location in the Southeast Asian Sea, and as a result, the country persistently faces an ominous catch-22 in terms of its foreign policy. The Philippine dilemma stems from the difficulty of pursuing a peaceful and independent path amid the competition from the great powers in the region. The Filipino social majority — the masses of working people — desire a progressive and nonaligned foreign policy course to attain a better and safer future, but Manila’s elites are national fetters to this aspiration. This only looks set to continue under the freshly installed reactionary Philippine government, led by Ferdinand Marcos Jr.

During his presidential campaign, Marcos Jr affirmed his preference for preserving the United States’ economic-security architecture across the broader region. He also, however, maintained a deliberate vagueness during his inaugural speech in late June. The preferred approach of Marcos Jr seems to be to enhance American imperialism’s growing belligerency toward China while also maximizing amicable diplomatic space with Beijing via increasing economic exchange.

Any Philippine foreign policy agenda will not primarily be shaped by one man alone but by a set of foreign and domestic determinants and factors. Despite Marcos Jr’s previous declarations — which can always be amended in the face of challenges — it is these constraints that actually wield compelling historical and material weight over the Philippine state as it navigates today’s capitalist world. To understand the Philippines today, we need to situate it in this world as a backward and underdeveloped capitalist state within the global periphery.

Several key factors suggest that the Marcos Jr regime will maintain an essentially pro-American foreign policy within this chaotic system.

The first is location. Critically located along the first island chain (of Pacific Ocean archipelagos) and strategically adjacent to the Southeast Asian Sea, the Philippines is deemed a frontline state by both Washington and Beijing. Unlike China, however, the United States steadfastly maintains five treaty-mandated military bases on Philippine soil. Thus, Manila ardently remains a key component of America’s regional security infrastructure.

Second, the Philippines’ colonial history ensures a pro-US orientation. At the end of the nineteenth century, the Philippines became the United States’ first imperial outpost in Asia. Since 1946, the bourgeois republican state has transformed into a robust semicolony inside US imperialism’s sphere of influence and domination. Manila was integrated into Washington’s global economic infrastructure (via foreign aid, debt, and neoliberal schemes) and security architecture (via military doctrinal exchanges, intelligence sharing, and joint defense/interoperability exercises). Indeed, this unjust structural setup continues to operate in the United States’ favor.

The country’s function in the global economy is a crucial third factor. The Philippines endures as a semicolonial-type economy within the periphery of the capitalist world system. Due to this subordinate position, its economy continues to function as a source of superprofits for the imperialist core. These predicaments are primarily generated by the generalized form of monopoly-finance capital, which maintains the Philippines’ structural vulnerability and subservience to the United States’ hegemonic rule.

To understand the Philippines today, we need to situate it as a backward and underdeveloped capitalist state within the global periphery.

The Filipino ruling-class attitude also cannot be ignored. The capitalist class continues to rule Philippine society based on elite socioeconomic interests. The Philippine state sets its national policy agenda in direct collaboration with a privileged segment of the Filipino bourgeoisie. This very powerful oligarchic layer typically takes a pro-imperialist outlook on economic-political-security affairs in order to protect its interests. They maintain a resounding hold over the top echelons of the reactionary Philippine state.

In addition, the national security–foreign affairs sector of the Philippine state apparatus has always been oriented toward the West. Manila’s default position is to readily uphold a pro-US viewpoint in world affairs. This is backed up by both the Filipino military and foreign-service officers, who apply pressure on the government and act as a diplomatic shield to help protect the United States’ strategic interests in this part of the world.

Another key factor is trade. The United States remains ahead of China as the Philippines’ leading trade partner. In fact, eight of the Philippines’ top ten external trading partners are dedicated political-security allies of the US.

The Philippines’ ASEAN dealings also point toward a pro-US stance. The ASEAN region’s volatile dynamics compel it to respond to the swiftly rising interimperialist contestation. During the ASEAN-US Special Summit in May, ASEAN members — including the Philippines — further promised to cooperate with the United States’ new regional initiatives. It was also decided at the recent ASEAN foreign ministers’ meeting to establish an ASEAN-US Comprehensive Strategic Partnership (CSP) later this year.

A final key factor is President Marcos Jr’s mindset. At his inauguration, he expressed his intention to emulate his late dictator-father’s Cold War–era foreign policy legacy. In the 1970s, ex-president Ferdinand Marcos Sr had a nuanced strategic approach toward the United States, China, and the former Soviet Union. He principally developed economic and cultural ties with Beijing and Moscow, while keeping US imperialist troops and weaponry inside Philippine military bases. This too could be his son’s basic paradigm, albeit with some modifications. Marcos Jr may operationally align with the United States’ revitalized imperialist camp while enriching diplomatic relations with Beijing by swelling economic relations with China.

How Not to Calm the Waters

All these contextual factors will almost certainly push the Philippines further toward the US sphere of influence. In the Marcos Jr era, Manila will most likely be a loyal assistant to Washington in its effort to thwart Beijing’s rise on the global stage while simultaneously trying to benefit economically from China’s steady growth. Earlier this month, Marcos Jr’s foreign minister pointedly told the United States that “the Philippines continues of course to look at the big powers to help calm the waters and keep the peace.” This could be read as both an overture to the US and a warning that in theory the Philippines will hedge its bets. Ultimately, this geostrategic competition has only one outcome: to further threaten peace and stability in the region.