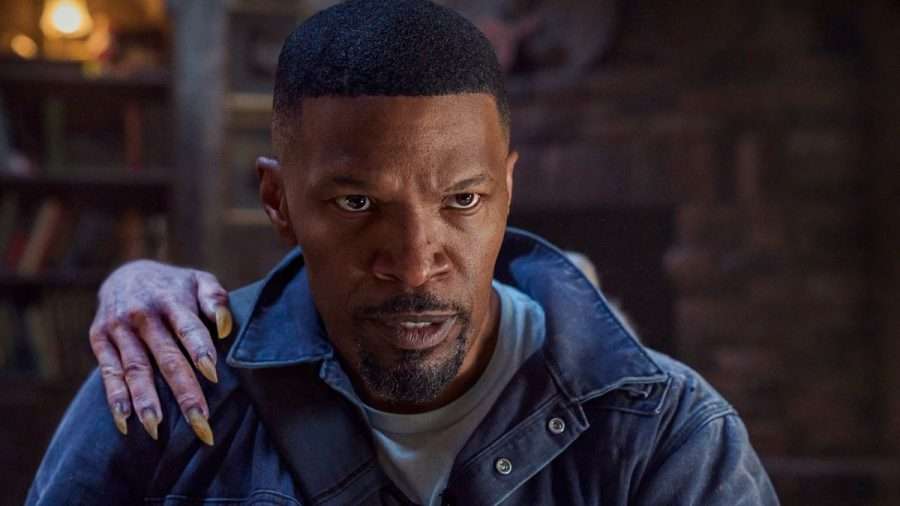 With a solid premise about working-class vampire hunters, Day Shift had real potential — but there’s no escaping the Netflix curse.

Too bad about Day Shift. It’s got a good premise. But after a few promising early scenes, it turns rote, macho, and tiresome.

And for a Netflix movie that cost $100 million, it sure looks bad in certain sequences. The underground cave section toward the end is pitiful. Maybe throw the production design team a few bucks, would ya?

Day Shift is about a struggling pool cleaner named Bud Jablonski (Jamie Foxx) driving his rusted out, loaded-down pickup truck from job to job around the sunbaked San Fernando Valley. But he’s only using that job as a cover — he’s really a working-class vampire hunter, cleaning houses of invading bloodsuckers. He works with his own customized tools, such as a silver-coated wire that can be stretched across a doorway at neck height, which, according to Bud, “never fails” to behead the unwary vampire on the attack. But though the work is onerous, he’s barely getting by. To support himself, he cashes in vampire fangs at a local pawnshop run by Troy, played by the terrific Peter Stormare.

It seems that Bud has been drummed out of the vampire hunters’ union for multiple infractions of the “he just won’t go by the book” variety so popular in action films. And his rate of pay suffers accordingly.

When his ex-wife Jocelyn (Meagan Good) demands that Bud come up with enough money for private school plus some long-overdue braces for their ten-year-old daughter Heather (Natasha Liu Bordizzo), Bud realizes the only way to get it is to go on a vampire-hunting spree at union rates. So he goes to plead for readmittance, bringing his friend, a highly respected union member named Big John Elliott (Snoop Dogg). The union operates in secret in a corporate office underneath a laundromat. The sneery union boss, Ralph Seeger (Eric Lange), grudgingly reinstates Bud. But he assigns Bud a supervising partner, a bespectacled desk jockey named Seth (Dave Franco). He’s totally untested in the field, but will make a good spy dinging Bud for further infractions against union rules, which will allow Seeger to throw Bud out of the union for good.

To say the least, the union is presented in unflattering terms. Sure, the money is better, but the bureaucracy! All those nitpicky rules and regulations, not to mention the heavy-handed and corrupt bosses!

If that seems like the kind of pop-culture critique of unions you’d have seen back in the 1940s through the early 1970s, when unions were comparatively strong, well — yeah. It’s disheartening to see a replay of this kind of petty griping in an era when the labor movement has long since been crushed, and we’ve seen how bitterly that has cost the working class.

There’s not much more to the film from that point on. With Seth in tow, Bud goes about cleaning houses of vampire “hives,” and pretty soon a buddy movie develops as the two men, who hate each other initially, gradually become friends. Actually, Seth becomes converted to the fearless macho ways of Budd and Big John, and becomes a vampire hunter himself. He stops (literally) peeing his own pants in terror, and even faces down Ralph, the mean union boss.

“Do you know how to spell ‘Traitor’?” asks Ralph.

The ultimate villain isn’t the union boss, though, it’s Audrey San Fernando (Karla Souza), the Latina vampire real estate mogul who wears tight, brightly colored suits and has big plans to take over the valley and plant vampire hives everywhere. She’s got a sympathetic backstory — Bud killed her vampire daughter, whom she’d recovered and “turned” only when the girl was already old, so she looked like her mother’s own grandmother. But Audrey is painted as such a stereotypically evil girl-boss villain, this sympathy bid has no effect.

In interviews with the film’s producer Chad Stahelski (John Wick) about shepherding the film’s director, J. J. Perry, through a stuntman-to-director career arc that resembles his own, Stahelski bros it up big time, striking a similar note to the one adopted in the latter half of the movie:

Oh, we know. Climb the mountain, into the box, pull it out. Righteous, man.

It’s a shame the movie didn’t stick with its early, darkly comical tone, featuring the gritty life of a harassed blue-collar vampire hunter just trying to get by. Because that seemed promising, and Jamie Foxx was charming as the single dad with the gruesome and demanding job, shining everyone on from bosses to ex-wives to pawnshop guys, hoping to survive another day.

As the film winds up with a series of more conventional action scenes, it seems as if, instead of sticking with comedic action — which is always an option (see the entire career of Jackie Chan) — some combination of director and producers decided to go for a wearisome representation of the man so confident and incredible at what he does that he awes everyone.

Day Shift is yet another Netflix bid to create a big-budget, talent-packed action film franchise. But just like The Gray Man, it descends into mediocrity. The franchise goal is clearly indicated by developments at the end of the film, which doesn’t let certain compelling characters die lest sequels are a possibility. But so far, it’s a dubious trend that’s not panning out well.