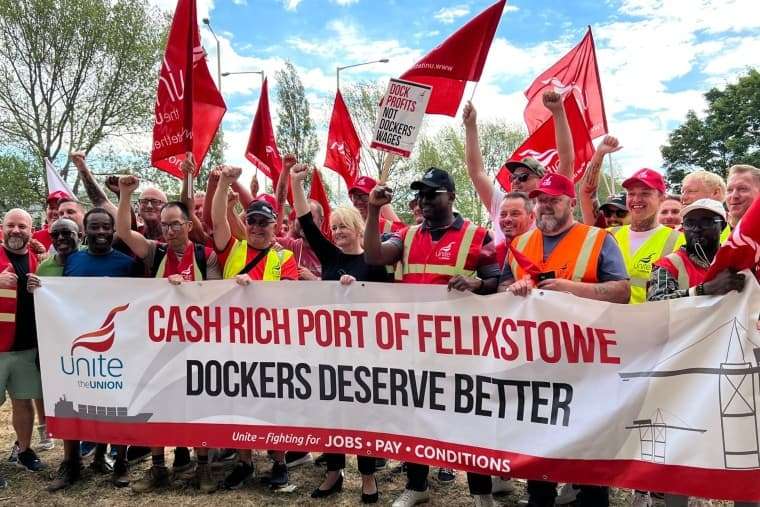 Dockers on picket lines at Felixstowe (Picture: @UniteSharon on Twitter)

Dock strikes in Felixstowe show that despite being drastically reduced in numbers by attempts to modernise the industry, dock workers still hold power. Bosses are playing down the ­disruption caused by the strike by claiming there will be no “prolonged impact” to supply chains.

According to one industry source, the total value of containers impacted by the eight-day strike is around £3.98 billion. “The congestion is expected to worsen across Europe with an increase in blank (cancelled) sailings and the container rollovers as a result of these cancellations will further impact the supply chain,” said Josh Brazil.

He’s the vice-president of “supply chain insights” for Project44 which tracks supply chains. Maersk, the second largest ocean carrier in the world, said, “We expect the strike to have a significant impact.” Workers do still have power if they use it.

Some 48 percent of all containers arriving in Britain are processed at Felixstowe. Without dockers, the ­process would entirely fall apart.

It takes around 40 days for goods to reach Britain from southeast Asia, meaning Christmas supplies may be hit. Brands such as Amazon, General Mills, Diageo, Kellogg and Mars Foods will all feel the sting as their products stay packed up in ­containers.

Attempts will be made to reroute goods to other British ports or Europe. But a severe shortage of HGV lorry drivers, the Tory Brexit fiasco and possibly strikes will also dent the freight handling supply chain.

Containerisation—sending cargo around in big metal boxes—was introduced to increase the amount of goods that could be quickly sent and received. Today container ships haul ­90­ ­percent of the world’s non-bulk cargo—unpacked goods in large quantities like oil, coal, sand and gravel.

Increasing capacity and capitalist profit-seeking means ships became ever bigger. Since 1968 they have increased by over 1,200 percent. A 20-foot container is known as having one TEU. Early container ships from the 1950s carried between 500‑800 TEUs.

In 2019 they reached 21,000‑25,000 TEUs taking up a whopping 24 bays in a dock. That’s why some of the ships headed for Felixstowe will be too big to unload at other docks. As freight cargoes got bigger, it became the role of workers using huge cranes to unload giant containers. This resulted in fewer dockers. But the centrality of cargo ships and docks to supply chains everywhere means a smaller number of workers hold an important source of power.

Last summer a quarter-mile-long cargo ship packed with 18,300 containers got stuck and caused a six-day jam in the Suez Canal, costing £8.47 billion a day. It shows how fragile the supply chain is—any barrier, including ­workers’ action, means huge profits sail away.

Strikes today are anchored in history of struggle

The docks have been a site of struggle since the early days of capitalism in Britain. In 1889 dock workers revolted against a system which meant they had  to fight to grab a few hours of casual work. Their strike was a key part of the birth of a mass trade union movement.

In 1947, as a result of workers’ militancy, the government set up the National Dock Labour Board to guarantee dockers a basic minimum fallback wage whether work was available or not. It was administered by the Transport and General Workers’ Union as well as bosses, giving the union a 50 percent control over hiring and firing.

But the union leaders’ involvement was double‑edged. It gave workers some input. But some officials organised strikebreaking against unofficial strikes and allowed the sacking of  militants if they disagreed with union leaders.

Yet militancy continued. A system in Glasgow and Liverpool of “spelling” and “the welt” became common, which slowed down work in the docks. The 1964 Labour government called for a commission to “decasualise” and modernise the docks, supported by the unions.

For workers, it meant belonging to one employer instead of being hired out for half-days by the board. But the fierce solidarity in the daily battles for wages and conditions was weakened and this had a terrible impact.

As struggle was broken, demoralisation spread. In 1968 some dockers marched in support of racist Tory MP Enoch Powell, who had been sacked over his infamous “Rivers of Blood” racist speech.

But dockers’ militancy in 1972 overturned Tory anti-union laws by 1974.  They won rights for workers still on the board’s scheme by guaranteeing full employment and large pay-offs if they were made redundant.

But there was not enough unity to keep jobs in the face of cuts or to save the scheme.  And as trade shifted towards eastwards ports like Felixstowe and Dover became busier—neither of which had been part of the scheme.

They were seen as a weak link in later strikes. But Felixstowe now is in the vanguard of resistance.

It’s not just Felixstowe dockers striking for better pay in the face of the skyrocketing wealth of shipping container companies. Thousands of dock workers at Germany’s major seaports of Hamburg, Emden, Bremerhaven, Bremen, Brake and Wilhelmshaven struck for 48 hours at the end of last month.

It was the third strike by 12,000 workers who previously walked out in June. Meanwhile a week‑long strike at the Port of Oakland near San Francisco by over 1,000 truckers last month brought the docks to a standstill.

And truckers in South Korea also struck for a week, adding strain to the global supply chain. The bottleneck means the TransAtlantic route from the United States to Europe is now at 27 days—the highest it’s ever been is 29.

It could take months for the congestion to be cleared, as alternative ports, including Rotterdam, can’t cope with the volume.  But workers in the Netherlands are ready to stand in solidarity—rather than help bosses.

The FNV Havens union—the largest in the Netherlands—and the trade union department of the port HPH ECT Rotterdam wrote a solidarity letter to Unite union. The statement called the decision not to raise salaries as “incomprehensible”.

Unite rep Bobby Morton said last week, “I’ve had letters of support from the American dockworkers on the West Coast. They will refuse to handle any work that’s going to or from Felixstowe.”