Home / News / A. Philip Randolph’s Radical, Stirring Speech at the 1963 March on Washington 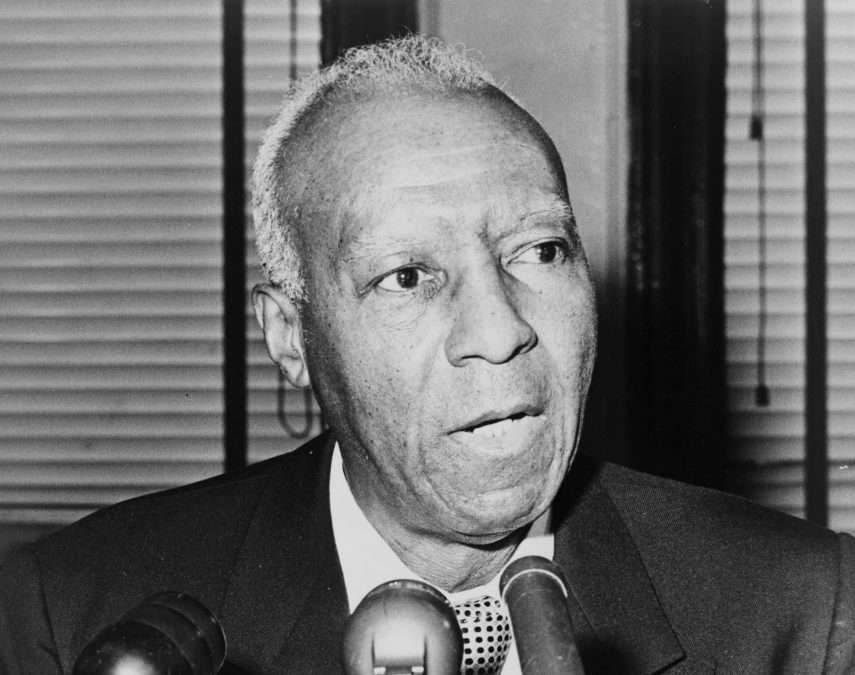 The official head of the August 28, 1963, March on Washington was socialist A. Philip Randolph. In his speech, reprinted here, he called for restructuring society so the “sanctity of private property takes second place to the sanctity of the human personality.”

We’re gathered here for the longest demonstration in the history of this nation. Let the nation and the world know the meaning of our numbers.

We are not a pressure group, we are not an organization or a group of organizations, we are not a mob. We are the advanced guard of a massive, moral revolution for jobs and freedom. This revolution reverberates throughout the land, touching every city, every town, every village where black men are segregated, oppressed, and exploited.

But this civil rights revolution is not confined to the Negro, nor is it confined to civil rights, for our white allies know that they cannot be free while we are not. And we know that we have no future in a society in which 6 million black and white people are unemployed and millions more live in poverty.

Nor is the goal of our civil rights revolution merely the passage of civil rights legislation. Yes, we want all public accommodations open to all citizens, but those accommodations will mean little to those who cannot afford to use them. Yes, we want a Fair Employment Practice Act, but what good will it do if profit-geared automation destroys the jobs of millions of workers, black and white?

We want integrated public schools, but that means we also want federal aid to education, all forms of education. We want a free, democratic society dedicated to the political, economic, and social advancement of man along moral lines.

Now, we know that real freedom will require many changes in the nation’s political and social philosophies and institutions. For one thing, we must destroy the notion that Mrs Murphy’s property rights include the right to humiliate me because of the color of my skin.

A. Philip Randolph and other civil rights leaders make their way to Congress during the March on Washington, 1963. (Library of Congress)

Negroes are in the forefront of today’s movement for social and racial justice, because we know we cannot expect the realization of our aspirations through the same old antidemocratic social institutions and philosophies that have all along frustrated our aspirations.

Those who deplore our militants, who exhort patience in the name of a false peace, are in fact supporting segregation and exploitation. They would have social peace at the expense of social and racial justice. They are more concerned with easing racial tension than enforcing racial democracy.

The months and years ahead will bring new evidence of masses in motion for freedom. The March on Washington is not the climax of our struggle, but a new beginning — not only for the Negro, but for all Americans who thirst for freedom and a better life. Look for the enemies of Medicare, of higher minimum wages, of Social Security, of federal aid to education, and there you will find the enemy of the Negro: the coalition of Dixiecrats and reactionary Republicans that seek to dominate the Congress.

We must develop strength in order that we may be able to back and support the civil rights program of President Kennedy. In the struggle against these forces, all of us should be prepared to take to the streets. The spirit and techniques that built the labor movement, founded churches, and now guide the civil rights revolution must be a massive crusade, must be launched against the unholy coalition of Dixiecrats and of the racists that seek to strangle Congress. We here today are only the first wave.

When we leave, it will be to carry on the civil rights revolution home with us into every nook and cranny of the land, and we shall return again and again to Washington in ever-growing numbers until total freedom is ours. We shall settle for nothing less, and may God grant that we may have the courage, the strength, and faith in this hour of trial by fire never to falter.