Home / News / How bosses squeeze us for profits 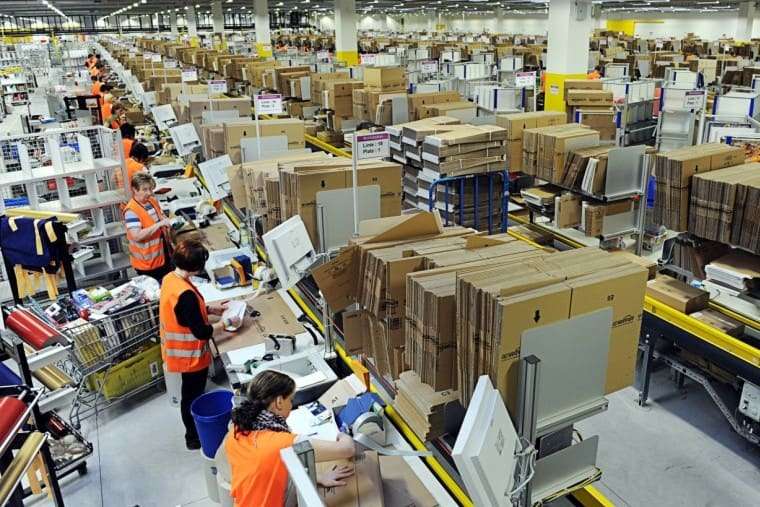 Exhausted and ground down after every day on the job, many of us know we have reached the limits of what we are capable of. Working harder seems impossible, but that’s ­precisely what the ruling class wants.

“There’s a ­fundamental issue of British working culture,” she added before acknowledging, “It’s not a popular message.”

Bosses today make a big point about how they are attempting to boost productivity in their workplace. And this is dutifully reported by the media as a positive thing.

They want workers to work “harder, smarter and faster”. But behind this rhetoric is the drive to exploit workers and make as much profit as possible.

Economists compare ­productivity in Britain to other western European nations, such France and Germany. They say our productivity has increased at a slower rate.

That’s true, but labour productivity in Britain still grew 0.4 percent each year in the 12 years since the financial crisis. And that’s largely because bosses are turning the screw on us.

A recent study called Work Still Harder took data from British Skills and Employment surveys to try and understand why work intensity increased between 2001 and 2017. The study lists how the ­intensification of work results from the bosses’ drive to increase worker productivity.

It notes that ­disciplinarian management styles, the encouragement of competition between workers, and pay that rewards workers for working harder all contribute to work intensification. The study also shows that the growing prevalence of ­outsourcing and casual work—and a decrease in the power of trade unions—are also likely factors.

Do not value migrants just for their ‘productivity’
Read More

Companies that make the most obscene profits have mastered the most effective ­ways to exploit their employees. Amazon fulfilment centres are an example of how technology and surveillance has been weaponised to try and squeeze as much productivity out of workers as possible. A system of algorithms ­calculates how fast an individual worker can complete tasks.

The algorithm then gives them targets to reach. When workers miss a target or spend too long away from their station they are punished for it and given a warning. If they get too many warnings, they risk losing their jobs.

Workers are also barred from sitting, except during their statutory 30-minute break, to ensure they are as productive as possible. Yet despite all the physical and mental pain we are forced to endure, the Tories and the bosses are still dissatisfied.

Capitalists only make profit because they don’t pay workers what their labour is worth. Take a worker doing an eight-hour day, for example. The boss pays them for four of those hours only what they need so they can buy food, pay rent and survive work another shift.

For the next four hours, the worker will be grafting solely to grow the boss’s profits. This is what Karl Marx called this ­“surplus value.”

He wrote, “The fact that half a day’s labour is necessary to keep the labourer alive during 24 hours does not in any way prevent him from working a whole day.” But to grow profits, even this level of exploitation is not sufficient.

Marx identified two main ways in which capitalists can squeeze even more surplus value out of their workers. The first is to simply prolong the working day, say from eight hours a day to nine. Marx said that this process would increase “absolute” surplus value. And by boosting the number of hours worked and increasing surplus value, the bosses can maximise their profits.

This crude method of increasing surplus value was popular with early ­capitalists but, of course, not with workers, who were being worked to an early grave. In the 1870s workers toiled on average 70 hours a week but often did not live past 40 years old.

Struggle became the only way to force the bosses to reduce working hours. Gas workers in London went on strike in 1889 to demand an eight-hour day and won.

The following year, on May Day, some 200,000 workers took the streets and marched behind a banner calling for an eight-hour day. Many separate battles for a shorter working day were fought and won throughout the nineteenth century, but it was only after the second world war that an eight-hour day became the norm.

The combination of ­workers’ resistance and the fact that bosses noticed that workers weren’t as productive when they had to labour every hour of the day led to change. Firms now had to find other ways to squeeze more ­productivity from workers.

Their aim was to find new ways to cover the cost of their workers’ wages in a shorter amount of time. If this could be achieved while workers’ laboured for the same as usual, bosses could increase surplus value.

Marx called this an increase in “relative” surplus value. He identified three ways the bosses could boost surplus value ­without necessarily making the working day longer.

The first was ­introducing new technology into the ­workplace that could reduce the time it takes workers to ­produce goods. The second was to try and bring down the cost of essential products that workers need to live by increasing productivity in agriculture and the consumer goods industries. And the last was ­increasing the pressure on workers to make them work harder.

Socialist writer Chris Harman described in his book Zombie Capitalism how the bosses did this by embracing the ­movement for scientific ­management, founded by F W Taylor in the 1890s. He wrote, “Taylor believed that every task done in the industry could be broken down into individual components and timed, so as to determine the maximum which workers could accomplish.

“In this way, any breaks in the tempo of work could be eliminated, with Taylor claiming he could increase the amount of work done in a day by as much as 200 percent.” He added, “The speed at which people worked now depended on the speed at which the line moved, rather than their individual motivation. In other industries, the same pressure on people to work flat out was achieved by increasing surveillance by supervisors.”

Nowhere was this method of increasing surplus value carried out more comprehensively than in car ­manufacturing. In traditional car plants, workers worked “productively” for 45 seconds each minute. In technologically advanced car plants that relied on “line work”, ­workers worked productively for around 57 seconds a minute.

Capitalism— is it more than greed?
Read More

So assuming a ten second per minute increase applied to a plant of 2,000 workers. That means 2,667 extra work hours are performed over the course of an eight-hour shift.

That is the ­equivalent of hiring an additional 333 ­workers or the equivalent to each worker performing more than an extra day’s work every week. When workers resist attempts to make them work harder, for no extra pay Tories such as Truss will call them “lazy”.

But workers have endured over a decade of austerity since the financial crisis and are now suffering the cost of living crisis.  A workforce that gets poorer, sicker and more miserable every year will not be a particularly productive one. And when wages don’t cover the cost of living, why would we work harder for no more pay?

This poses an issue for the bosses in Britain. They could intensify their tactics to try and make us work harder or raise wages and provide better conditions. The answer is almost always to pile on the pressure, target trade unions and to try to crush ­workers’ resistance so they can keep their profits high.

But in the last few months, hundreds of thousands of ­workers across Britain are making it clear they won’t stand for this anymore. More strikes are needed now, or workers will not be able to withstand the onslaught on their conditions. The only way to beat a ­productivity crisis is to smash a system where workers’ labour is only valued for how much profit it can bring in.